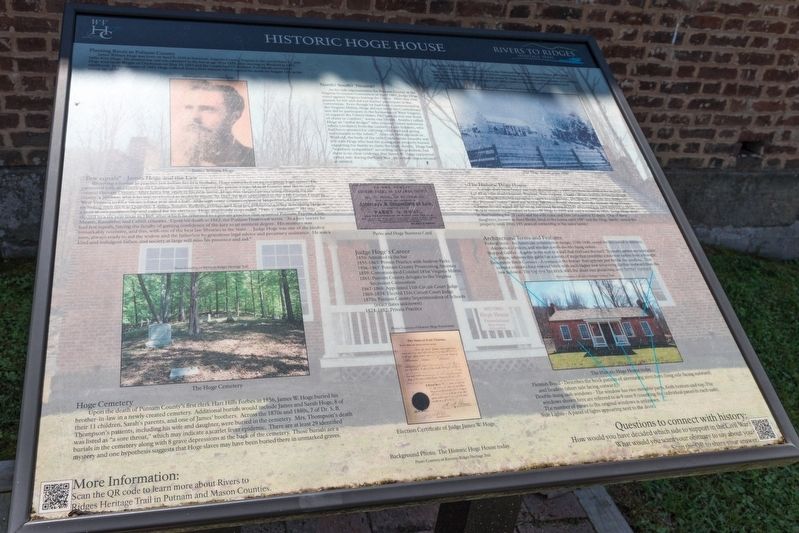 Planting Roots in Putnam County
James William Hoge was born on April 9, 1830 in Staunton, Augusta County, Virginia to Reverend Peter C. and Sallie Kerr Hoge. He studied law and was admitted to the bar at age 20 in 1850, later moving to Winfield in 1852. Hoge wed Sarah Wright of Charleston on May 19, 1857 and the couple had 11 children, 8 of whom survived to adulthood. In the summer of 1882, Hoge suffered from a liver ailment which caused his death on August 12th at the young age of 52.

“Few equals” — James Hoge and the Law
Receiving a license to practice law before his 21st birthday, Hoge embarked on a prestigious legal career. He partnered with an experienced Charleston attorney to expand the practice into Mason County and the recently created Putnam County. After just a few years in his new home, Hoge was elected prosecuting attorney for the county, a position which he was re-elected to multiple times. In 1867, he was appointed to the 11th Circuit Court in West Virginia to fill a vacancy for a year and a half. Although some citizens opposed his politics, 42 lawyers including 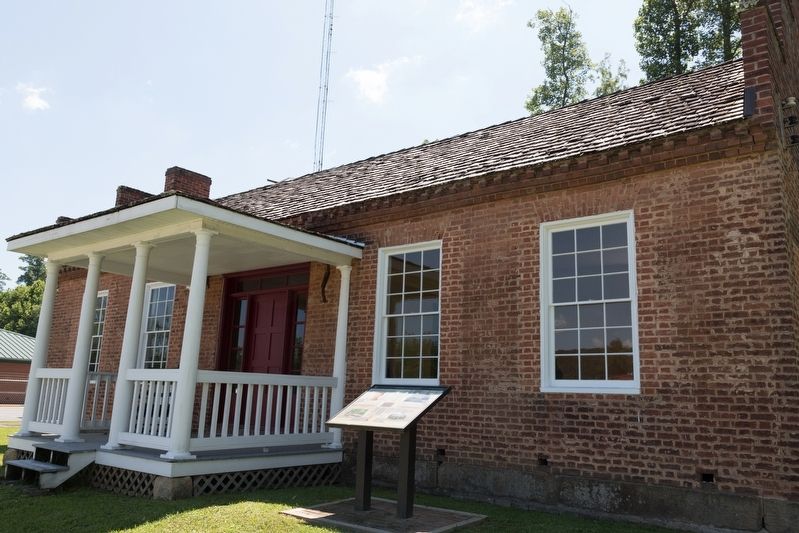 Click or scan to see
this page online
men such as Quarrier, Laidley, Simms, Ruffner, Polsley, and Bowyer, published a letter describing Hoge as a man above partisanship and called for his election. Hoge graciously responded, “I am a candidate.” He was elected to a six year term in 1869, after which he returned to a private practice that spanned Putnam, Fayette, Clay, Mason, Kanawha, and Cabell counties. Upon his death in 1882, the Putnam Democrat wrote “As a jury lawyer he had few equals, having the faculty of gaining confidence of the jury to an eminent degree. His memory was remarkably retentive, and this, with one of the best law libraries in the State. ... Judge Hoge was one of the kindest men, always ready to aid the widow and the fatherless by gratuitous legal advice and pecuniary assistance. He was a kind and indulgent father, and society at large will miss his presence and aid.”

Hoge Cemetery
Upon the death of Putnam County’s first clerk Hart Hills Forbes in 1856, James W. Hoge buried his brother-in-law in a newly created cemetery. Additional burials would include James and Sarah Hoge, 8 of their 11 children, Sarah’s parents, and one of James’ brothers. Across the 1870s and 1880s, 7 of Dr. S. B. Thompson’s patients, including his wife and daughter, were buried in the cemetery. Mrs. Thompson’s death was listed as “a sore throat,” which may 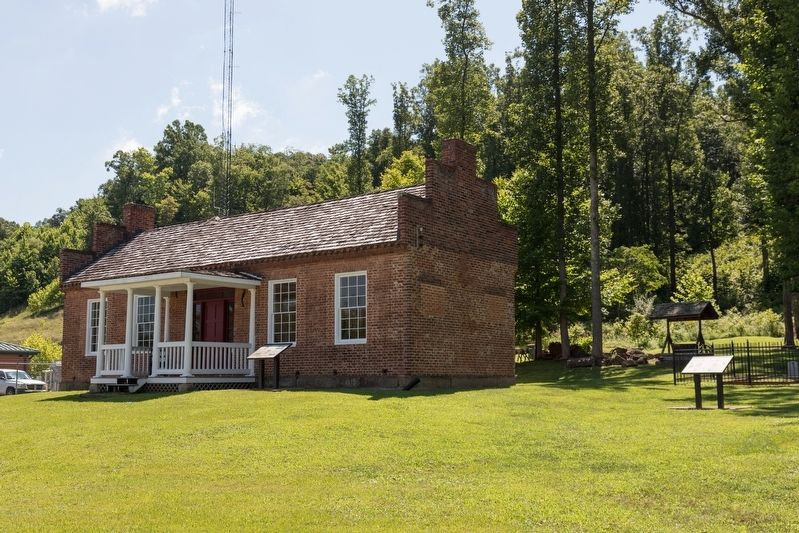 Photographed By J. J. Prats, July 13, 2019
3. Historic Hoge House and Markers
indicate a scarlet fever epidemic. There are at least 29 identified burials in the cemetery along with 8 grave depressions at the back of the cemetery. Those burials are a mystery and one hypothesis suggests that Hoge slaves may have been buried there in unmarked graves.

North? South? Neutral?
As the sole representative for Putnam County at the Virginia Secession Convention in April 1861, Judge Hoge voted against Virginia leaving the Union. After that vote passed, he left and did not further participate in the convention. Even though he had been commissioned in the Virginia Militia, Hoge did not serve the Confederacy nor did he participate in the formation of West Virginia or support the United States. He “gave us not one word of cheer or comfort,” wrote one citizen. Another called Hoge an “artful dodger” who rescued “some notorious rebels [civilians] from the custody of our Soldiers, who had been arrested for carrying rebel mail and giving information to the rebels.” After an 1864 skirmish in Winfield, the body of the only Confederate casualty was left with Hoge who had the young man properly buried expecting the family to claim the body shortly. Hoge had “southern sympathies” according to his grandson, but there is no clear evidence that James W. Hoge supported either side during the Civil War. He is best characterized as neutral.

Historical Significance
The Historic Hog House is listed on the National Register of Historic Places, the United States’ official list of places worthy of historic preservation, for local significance. It derives significance from association with Judge James W. Hoge and as a vernacular example of Federalist architecture characterized by stepped side gables, interior chimneys, and a decorative brick cornice.

The Historic Hoge House
A single story brick house was built approximately 1000 feet from its current site in 1838 on Lot #8 in what would become Winfield, West Virginia. Charles Brown had the house built and his son Tallyrand Brown occupied it upon its completion. On May 22,1848 the first session of the Putnam County Court was held in Tallyrand Brown’s house, now the Historic Hoge House. Charles Brown willed the house to Tallyrand Brown in 1849 who sold it to John Bowyer in 1852, Bower rented the premises to James W. Hoge in 1855 and sold it to him in 1857. Judge Hoge lived in this building for 25 years and his wife remained here for another 32 years. One of their daughters, known as Aunt Birdie, lived in the house until 1947 and the Hoge family owned the property until 2002; 145 years of ownership in the same family!

Architectural Terms and Features
• Federal Style — An American construction design, 1780-1840, noted for the use of symmetry, decorative cornices, and windows with double-hung sashes.
• Stepped Gables — A gable is the end of a wall that encloses the roof. Typically gables are triangular in shape, whereas this gable has a series of steps that resemble a stairway rather than a triangle.
• Decorative Brick Cornice — A cornice is the feature that appears just below the roofline. This cornice contains four rows of brick with each higher row projecting further outward than the row below it. The top row has brick with the short end projecting even further outward.
• Flemish Bond — Describes the brick pattern of alternating stretchers (long side facing outward) and headers (short side facing outward).
• Double-hung sash windows — The window has two movable parts, both bottom and top. The windows shown here are referred to as 9 over 9 (counting the individual panes in each sash). The number of panes in the original windows is unknown.
• Side Lights — A panel of lights appearing next to the door.

Topics. This historical marker is listed in these topic lists: Architecture • Government & Politics • Notable Buildings • Settlements & Settlers. A significant historical date for this entry is April 9, 1830.

Location. 38° 31.937′ N, 81° 53.38′ W. Marker is in Winfield, West Virginia, in Putnam County. Marker is at the intersection of Courthouse Drive and Emergency Lane / Sabre Street, on the right when traveling south on Courthouse Drive. It is behind the courthouse. Touch for map. Marker is in this post office area: Winfield WV 25213, United States of America. Touch for directions.

More about this marker. This interpretive panel contains a number of illustrations: