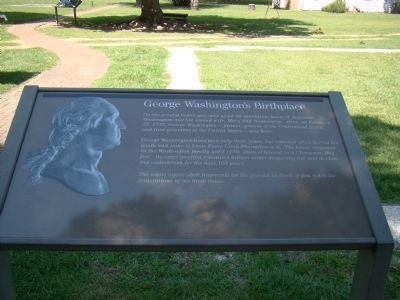 On the ground before you once stood the plantation home of Augustine Washington and his second wife, Mary Ball Washington. Here, on February 22, 1732, George Washington—farmer, general of the Continental Army, and first president of the United States—was born.

George Washington lived here only three years, but returned often during his youth and came to know Popes Creek Plantation well. The house remained in the Washington family until 1779, when it burned in a Christmas Day fire. Its exact location remained hidden under deepening soil and thickening underbrush for the next 150 years.

The white oyster shell fragments on the ground in front of you mark the foundations of the birth house.

Topics and series. This historical marker is listed in these topic lists: Agriculture • Colonial Era • Settlements & Settlers. In addition, it is included in the Former U.S. Presidents: #01 George Washington series list. A significant historical month for this entry is February 1861.

Location. Marker has been reported 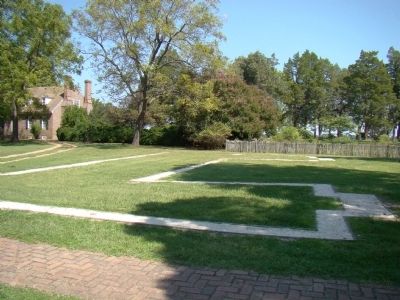 Click or scan to see
this page online
permanently removed. It was located near 38° 11.117′ N, 76° 55′ W. Marker was near Oak Grove, Virginia, in Westmoreland County. Marker could be reached from Popes Creek Drive (Virginia Route 204) north of Kings Highway (Virginia Route 3). It was at the George Washington Birthplace National Monument. Touch for map. Marker was in this post office area: Colonial Beach VA 22443, United States of America. Touch for directions.

More about this marker. While the property is where George Washington was born, the exact location is under review. It is now theorized that the site previously identified as the "Birthplace" might be incorrect. This led to the removal of the marker, which likely has inaccurate information.

Also see . . .
1. From Tobacco Plantation to National Shrine. “According to family tradition, ‘...Col. W. Aug W. ...was living at the birthplace in 1779 that on Christmas Day he had a company of neighbors and he with others returning from a ride at midday was first to discover the roof in a blaze, that the contents of the house were for the most part saved, a severe frost prevailing at the time enabled him to haul the furniture with oxen across Popes Creek on the ice to be sheltered in a house...and that the supposition as to the origin of the fire was that a spark from the chimney 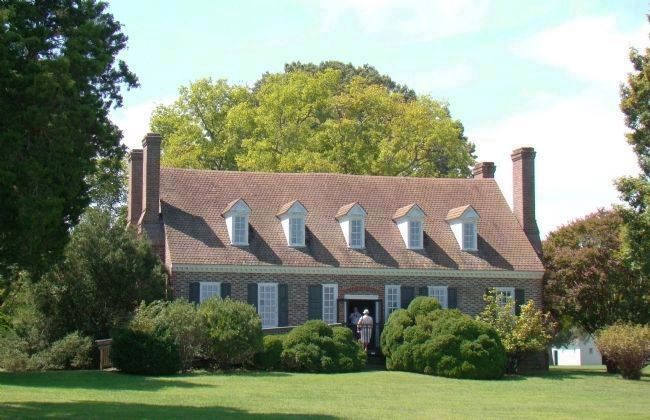 By J. J. Prats, September 5, 2009
3. George Washington’s Birthplace Memorial House
This house, an imagining of what the house of a prosperous plantation gentleman of the period would look like, was completed in 1932. In 1936 the foundation of the actual house were found and excavated. It was smaller and much different in shape. The actual house was just a few feet from this one. You can see this house in Photo 2 in the left distance. This view of the house faces the water.
had blown through the garret window to a pile of cotton in the seed stored in the garret.’ ” (Submitted on October 4, 2009.) 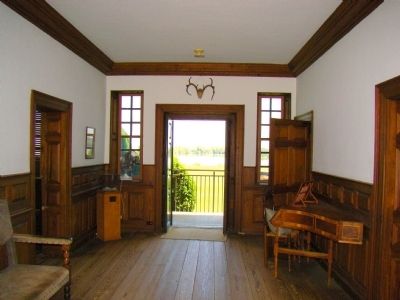 By J. J. Prats, September 5, 2009
4. Memorial House Central Hall
View is from the land-side door towards the water-side door. To the left are the dining room and the sitting room. On the right are two bedrooms. Distant door on the right leads to the stairway up. 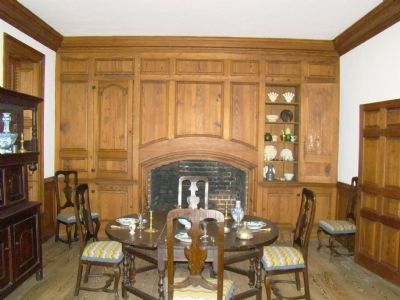 By J. J. Prats, September 5, 2009
5. Memorial House Dining Room
All furniture and furnishings in the house are reproductions created in the style of the era. This is why visitors can flash away with their cameras without restriction. 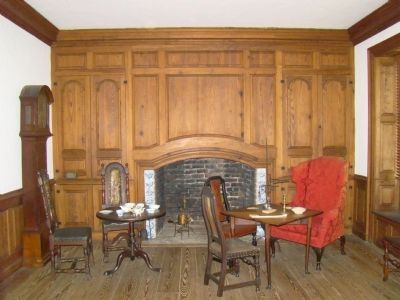 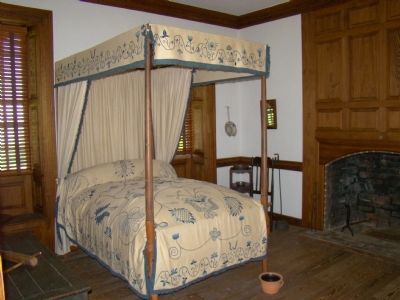 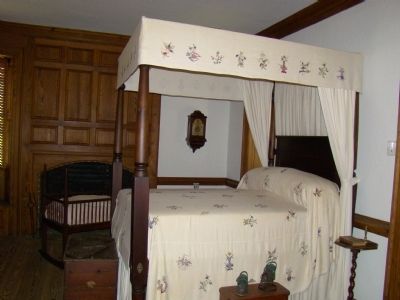 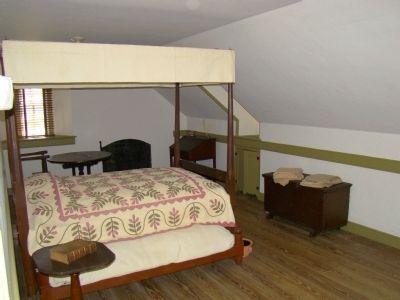 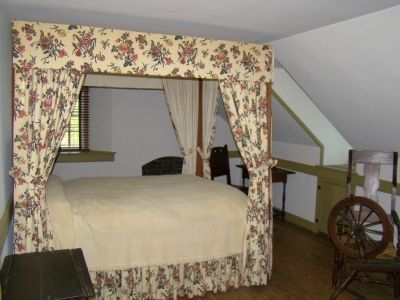 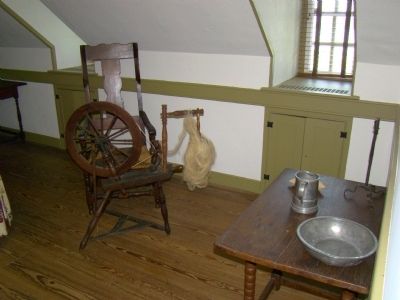 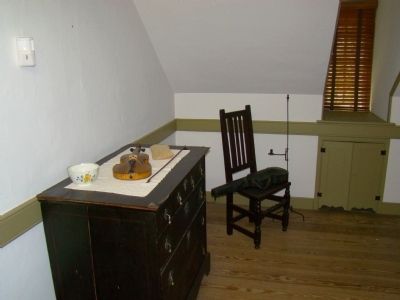 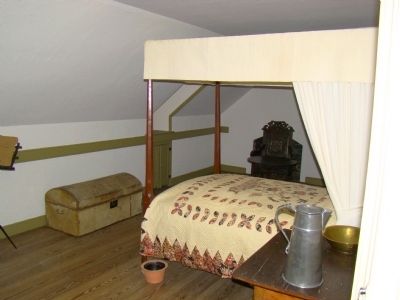 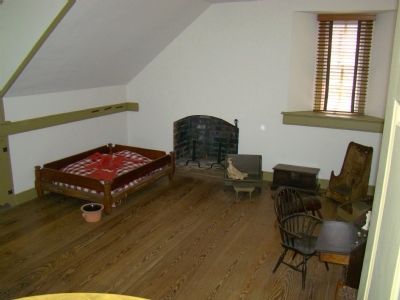 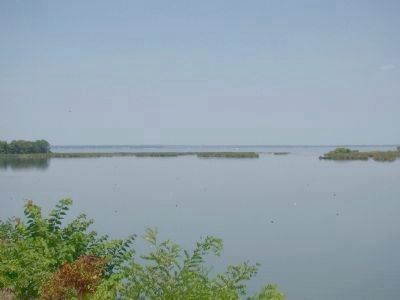 By J. J. Prats, September 5, 2009
15. View from the Front Lawn
The mouth of Popes Creek is in the foreground, then the Potomac River. On the distant horizon is the wooded Maryland shore. The Potomac River is more than four miles wide here. 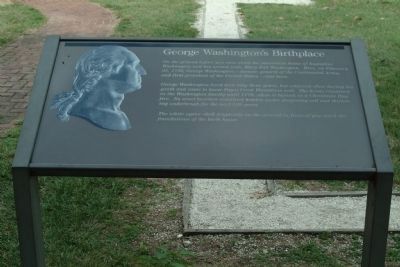 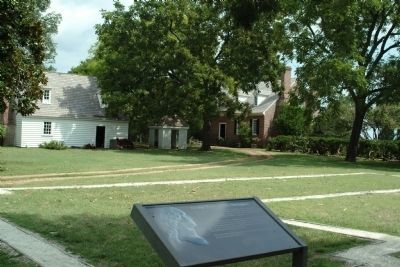