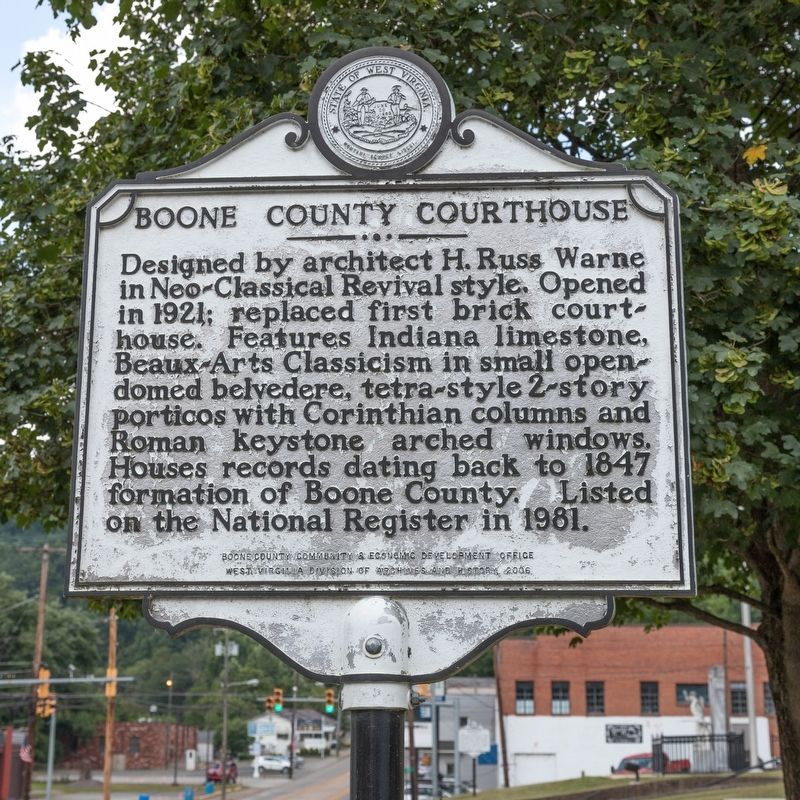 Topics and series. This historical marker is listed in these topic lists: Architecture • Political Subdivisions. In addition, it is included in the West Virginia Archives and History series list. A significant historical year for this entry is 1921.

Location. 38° 3.984′ N, 81° 49.175′ W. Marker is in Madison, West Virginia, in Boone County. Marker is at the intersection of State Street (West Virginia Route 85) and Avenue C, on the left when traveling south on State Street. It is on the courthouse lawn. Touch for map. Marker is at or near this postal address: 200 State St, Madison WV 25130, United States of America. Touch for directions. 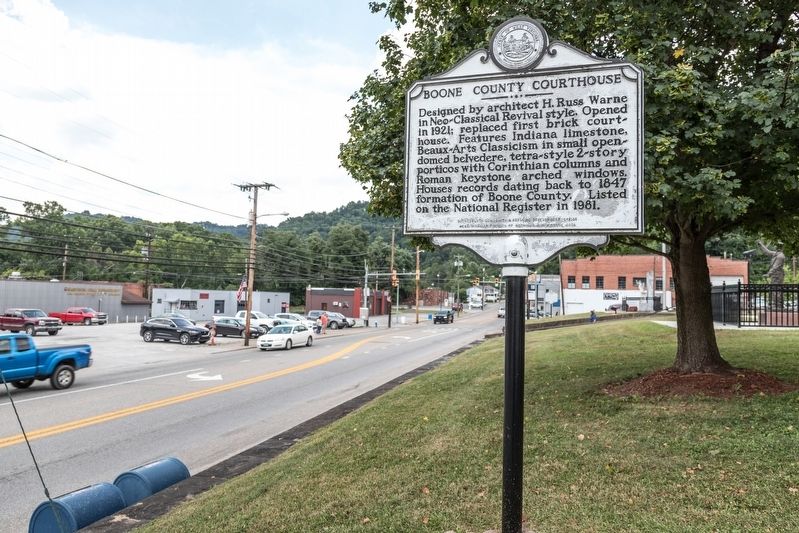 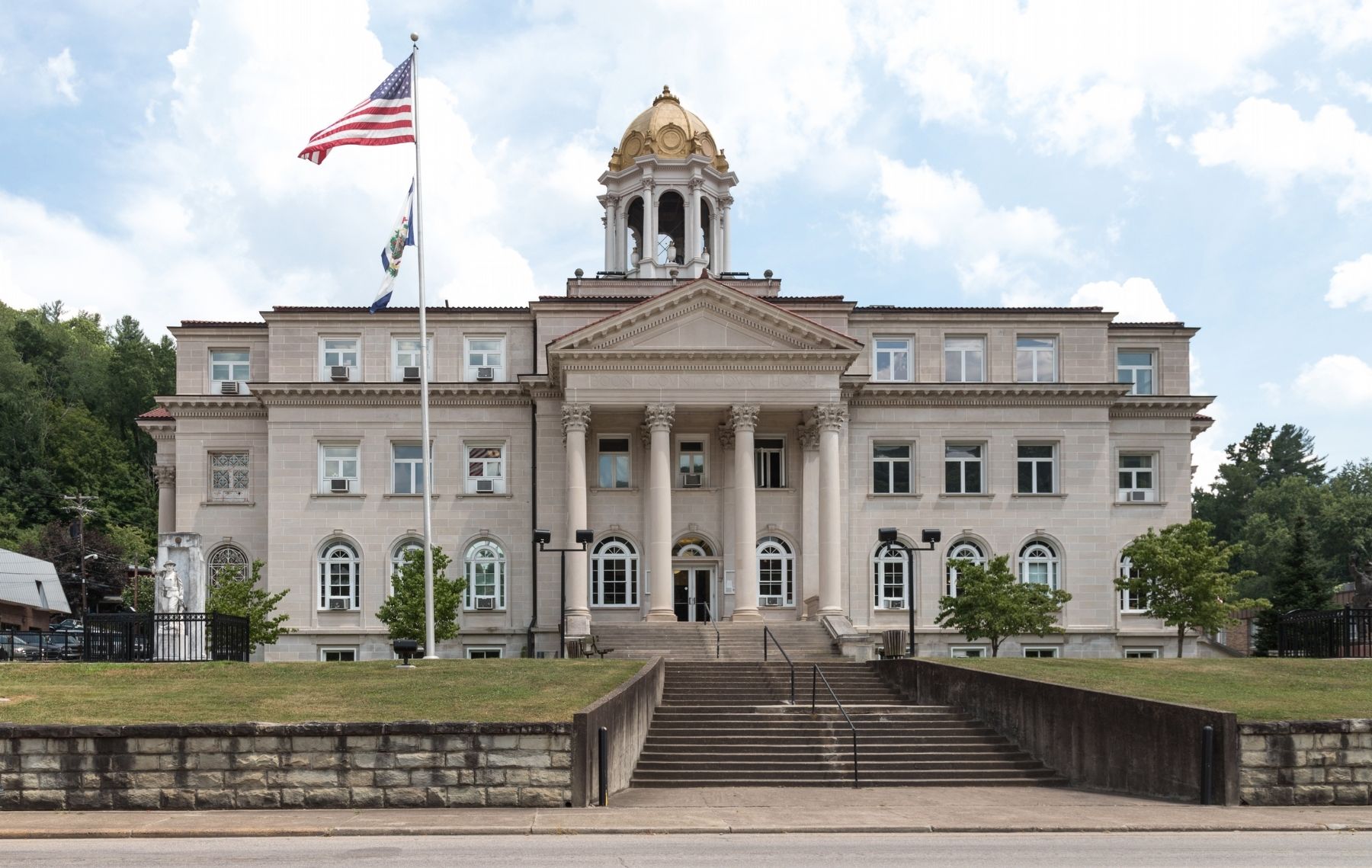 Photographed By J. J. Prats, July 15, 2019
3. Boone County Courthouse Marker
This historical marker is out of frame on the right. 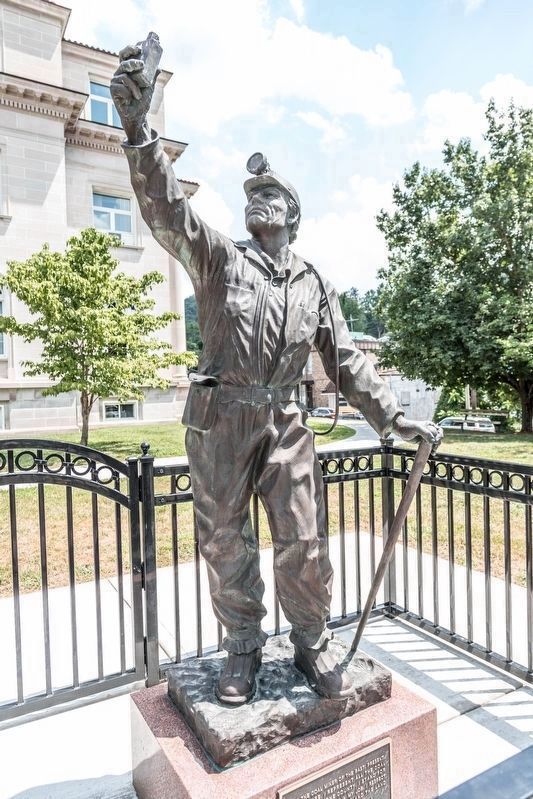 A standing figure of a miner. In his upraised proper right hand, he holds a rectangular container with a cap. His head is turned towards the container and he looks up at it. In his proper left hand, he clasps a tapered rod in front of him. The smaller end of the rod rests on the plinth beside his proper left foot. He wears a one-piece work suit, unbuttoned to the waist, with a shirt underneath. He wears a leather belt with several pouches and a battery pack attached on the rear. A cable runs from the battery pack to the lamp on his hard hat. He stands atop a rectangular stone base. 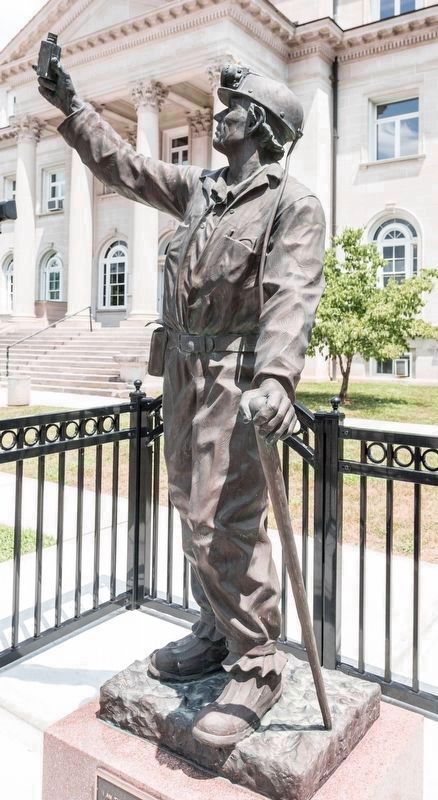 He is holding a gas detector and is checking the mine for unsafe levels of lethal gasses. Some, like carbon monoxide, can silently sicken and kill a person. Others, like methane, can ignite and set the mine afire. 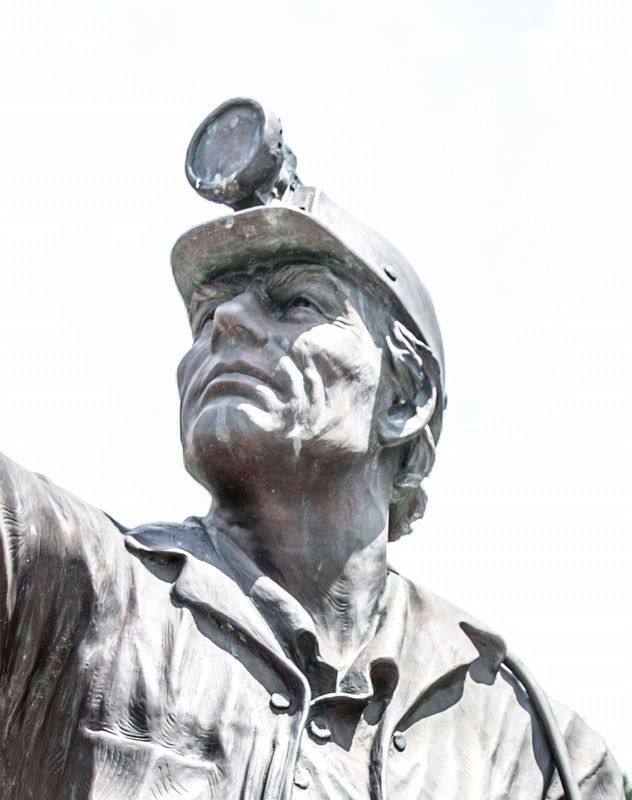 1987 bronze by Gary Prazen, photograph by J.J. Prats, July 15, 2019
6. The Sentinel
“I am the Coal Miner of the Past, Present and Future. I represent all the coal miners of Boone County. I stand for freedom and safety in my job. I respect my fellow coal miners and the land that God has blessed us with. —Mrs. Atha’s 3rd Grade Class of 1990-91, Van Elementary School.”

From the Smithsonian Art Inventories Catalog:

The cost of the statue, $30,000, was raised by the Holmes Safety Association from contributions from business, education, private and political groups. A school project was held to compose the plaque text and Mrs. Athey's third grade class was judged the winner. The base and plaque were donated by Ira Handley of Handley Funeral Home in Danville. The statue commemorates the mining tradition of West Virginia and the 100,000 miners who lost their lives in this century. Boone is the largest coal-producing city in West Virginia.