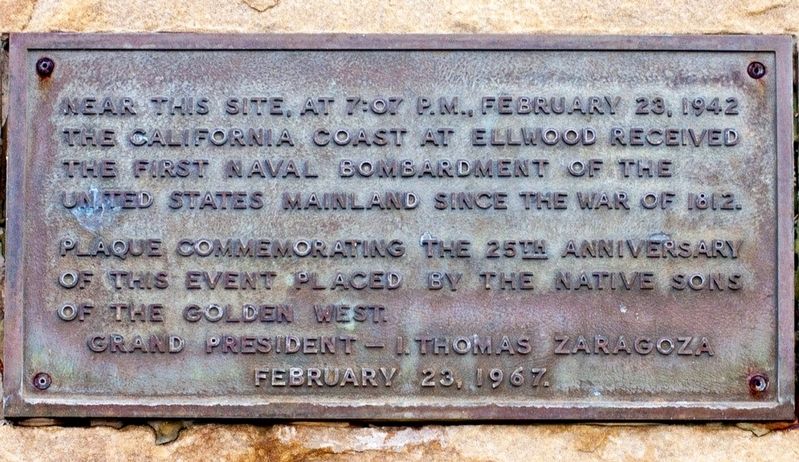 Photographed By Craig Baker, 2017
1. Japanese Attack Marker
Inscription.
Japanese Attack. . Near this site, at 7:07 P.M., February 23, 1942, the California coast at Ellwood received the first naval bombardment of the United States mainland since the War of 18 12. . This historical marker was erected in 1967 by Native Sons of the Golden West. It is in Goleta in Santa Barbara County California

Near this site, at 7:07 P.M., February 23, 1942, the California coast at Ellwood received the first naval bombardment of the United States mainland since the War of 1812.

Erected 1967 by Native Sons of the Golden West.

Topics and series. This memorial is listed in this topic list: War, World II. In addition, it is included in the Native Sons/Daughters of the Golden West series list. A significant historical date for this entry is February 23, 1942.

Location. 34° 25.826′ N, 119° 54.439′ W. Marker is in Goleta, California, in Santa Barbara County. Memorial can be reached from Hollister Avenue west of Cathedral Oaks Road, on the left when traveling west. At the Sandpiper Golf Club, south of the clubhouse. Touch for map. Marker is at or near this postal address: 7925 Hollister Ave, Goleta CA 93117, United States of America. Touch for directions.

Other nearby markers. At least 8 other markers are within 11 miles of this marker, measured as the crow flies. A different marker also named Japanese Attack (approx. half a mile away); Goleta Depot (approx. 3.2 miles away); Earle Ovington Terminal (approx. 4.1 miles away); Ovington's Hangar (approx. 4.7 miles away); Cold Spring Tavern 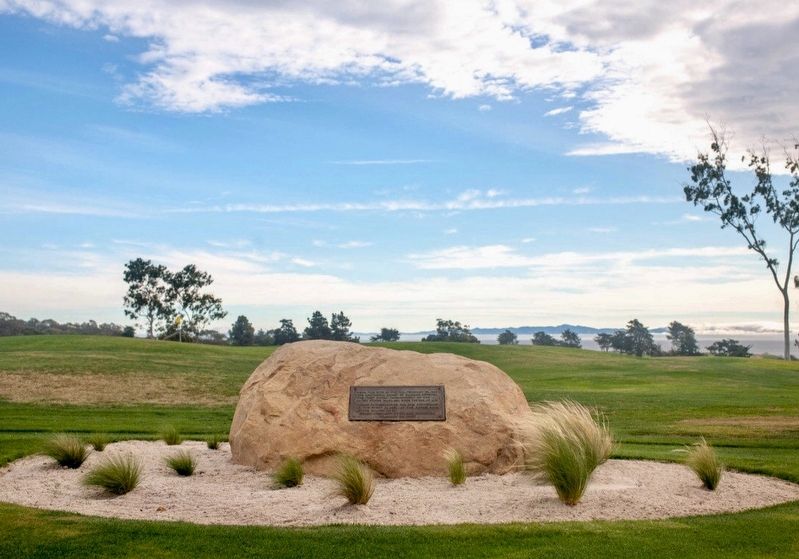 Regarding Japanese Attack. The Japanese government ordered a submarine to shell the California coast during President Roosevelt's radio speech. Captain Kozo Nishino was a naval reserve officer who, before the war, had commanded a merchant ship that stopped at Ellwood Oil Field to take on a cargo of oil. His attack damaged a derrick, pump house, pier, and catwalk. After 20 minutes, the gunners ceased fire and the submarine sailed away. Even though he caused only minor damage, Nishino had achieved his purpose, which was to spread fear along the American west coast.