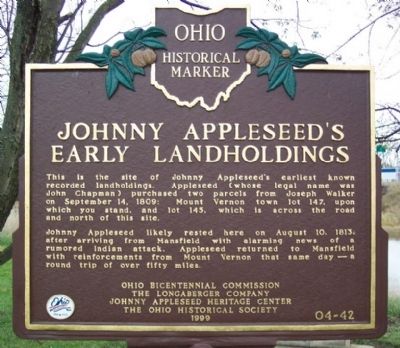 This is the site of Johnny Appleseed's earliest known recorded landholdings. Appleseed (whose legal name was John Chapman) purchased two parcels from Joseph Walker on September 14, 1809: Mount Vernon town lot 147, upon which you stand, and lot 145, which is across the road and north of this site.
Johnny Appleseed likely rested here on August 10, 1813, after arriving from Mansfield with alarming news of a rumored Indian attack. Appleseed returned to Mansfield with reinforcements from Mount Vernon that same day--a round trip of over fifty miles.

Topics and series. This historical marker is listed in these topic lists: Horticulture & Forestry • Settlements & Settlers. In addition, it is included in the Ohio Historical Society / The Ohio History Connection series list. A significant historical month for this entry is September 1924. 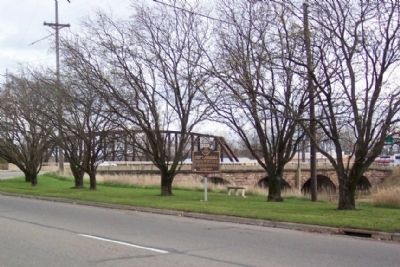 Click or scan to see
this page online
, Ohio, in Knox County. Marker is at the intersection of Phillips Street and Main Street (Ohio Route 13) when traveling east on Phillips Street. Touch for map. Marker is in this post office area: Mount Vernon OH 43050, United States of America. Touch for directions.