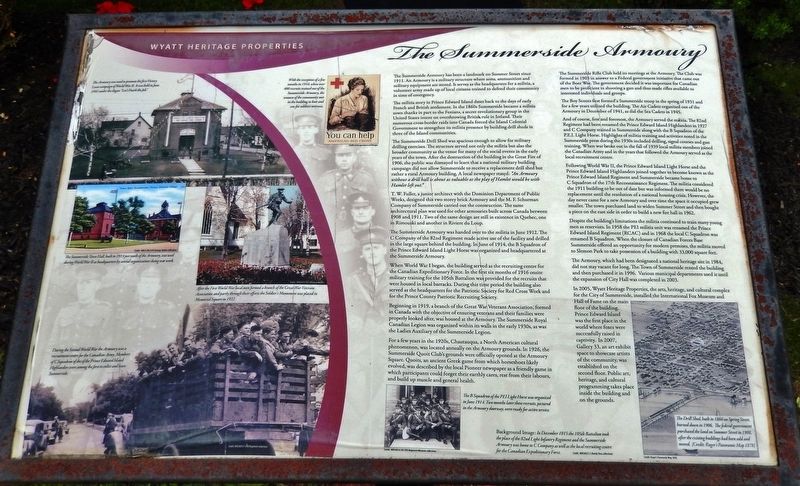 The Summerside Armoury has been a landmark on Summer Street since 1911. An Armoury is a military structure where arms, ammunition and military equipment are stored. It serves as the headquarters for a militia, a volunteer army made up of local citizens trained to defend their community in time of emergency.

The militia story in Prince Edward Island dates back to the days of early French and British settlement. In the 1860s Summerside became a militia town thanks in part to the Fenians, a secret revolutionary group in the United States intent on overthrowing British rule in Ireland. Their numerous cross-border raids into Canada forced the Island Colonial Government to strengthen its militia presence by building drill sheds in three of the Island communities.

The Summerside Drill Shed was spacious enough to allow for military drilling exercises. The structure served not only the militia but also the broader community as the venue for many of the social events in the early years of the town. After the destruction of the building in the Great Fire of 1906, the public was dismayed to learn that a national military building campaign 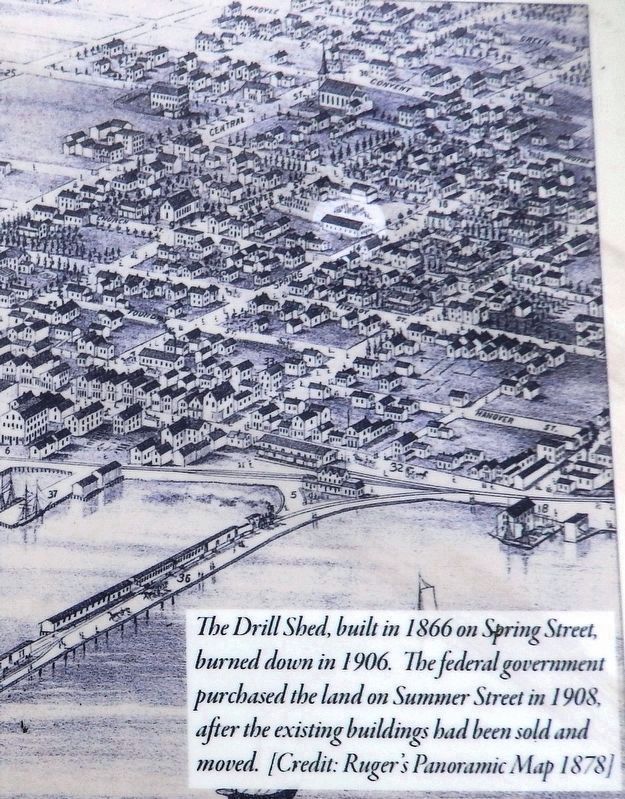 Photographed By Ruger’s Panoramic Map 1878
2. Marker detail: Summerside Drill Shed
The Drill Shed, built in 1866 on Spring Street, burned down in 1906. The Federal Government purchased the land on Summer Street in 1908, after the existing buildings had been sold and moved.

Click or scan to see
this page online
did not allow Summerside to receive a replacement drill shed but rather a rural Armoury building. A local newspaper stated: "An Armoury without a drill hall is about as valuable as the play of Hamlet would be with Hamlet left out.”

T. W. Fuller, a junior architect with the Dominion Department of Public Works, designed this two storey brick Armoury and the M. F. Schurman Company of Summerside carried out the construction. The same architectural plan was used for other armouries built across Canada between 1908 and 1911. Two of the same design are still in existence in Quebec, one in Rimouski and another in Riviere du Loup.

The Summerside Armoury was handed over to the militia in June 1912. The C Company of the 82nd Regiment made active use of the facility and drilled in the large square behind the building. In June of 1914, the B Squadron of the Prince Edward Island Light Horse was organized and headquartered at the Summerside Armoury.

When World War I began, the building served as the recruiting centre for the Canadian Expeditionary Force. In the first six months of 1916 onsite military training for the 105th Battalion was provided for the recruits that were housed in local barracks. During this time period the building also served as the headquarters for the Patriotic Society for Red Cross Work and for the Prince County Patriotic Recruiting 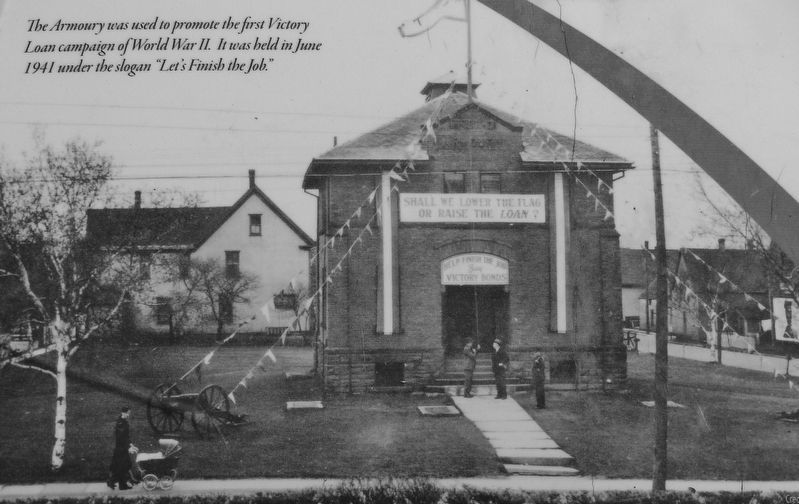 3. Marker detail: The Armoury in 1941
The Armoury was used to promote the first Victory Loan campaign of World War II. It was held in 1941 under the slogan "Let's Finish the Job."
Society.

Beginning in 1919, a branch of the Great War Veterans Association, formed in Canada with the objective of ensuring veterans and their families were properly looked after, was housed at the Armoury. The Summerside Royal Canadian Legion was organized within its walls in the early 1930s, as was the Ladies Auxiliary of the Summerside Legion.

For a few years in the 1920s, Chautauqua, a North American cultural phenomenon, was located annually on the Armoury grounds. In 1926, the Summerside Quoit Club's grounds were officially opened at the Armoury Square. Quoits, an ancient Greek game from which horseshoes likely evolved, was described by the local Pioneer newspaper as a friendly game in which participants could forget their earthly cares, rest from their labours, and build up muscle and general health.

The Summerside Rifle Club held its meetings at the Armoury. The Club was formed in 1903 in answer to a Federal government initiative that came out of the Boer War. The government decided it was important for Canadian men to be proficient in shooting a gun and thus made rifles available to interested individuals and groups.

The Boy Scouts first formed a Summerside troop in the spring of 1931 and for a few years utilized the building. The Air Cadets organized out of the Armoury in December of 1941, as did the Sea Cadets in 1945.

Credit MHCA014.1 (PEI Regiment collection)
4. Marker detail: World War II Recruits
During the Second World War the Armoury was a recruitment centre for the Canadian Army. Members of C Squadron of the Prince Edward Island Highlanders were among the first to enlist and leave Summerside.
of course, first and foremost, the Armoury served the militia. The 82nd Regiment had been renamed the Prince Edward Island Highlanders in 1927 and C Company trained in Summerside along with the B Squadron of the P.E.I. Light Horse. Highlights of militia training and activities noted in the Summerside press during the 1930s included drilling, signal courses and gun training. When war broke out in the fall of 1939 local militia members joined the Canadian Army and in the years that followed the Armoury served as the local recruitment centre.

Following World War II, the Prince Edward Island Light Horse and the Prince Edward Island Highlanders joined together to become known as the Prince Edward Island Regiment and Summerside became home to C Squadron of the 17th Reconnaissance Regiment. The militia considered the 1911 building to be out of date but was informed there would be no replacement until the resolution of a national housing crisis. However, the day never came for a new Armoury and over time the space it occupied grew smaller. The town purchased land to widen Summer Street and then bought a piece on the east side in order to build a new fire hall in 1962.

Despite the building's limitations the militia continued to train many young men as reservists. In 1958 the PEI militia unit was renamed the Prince Edward Island Regiment (RCAC) and in 1968 the local C Squadron 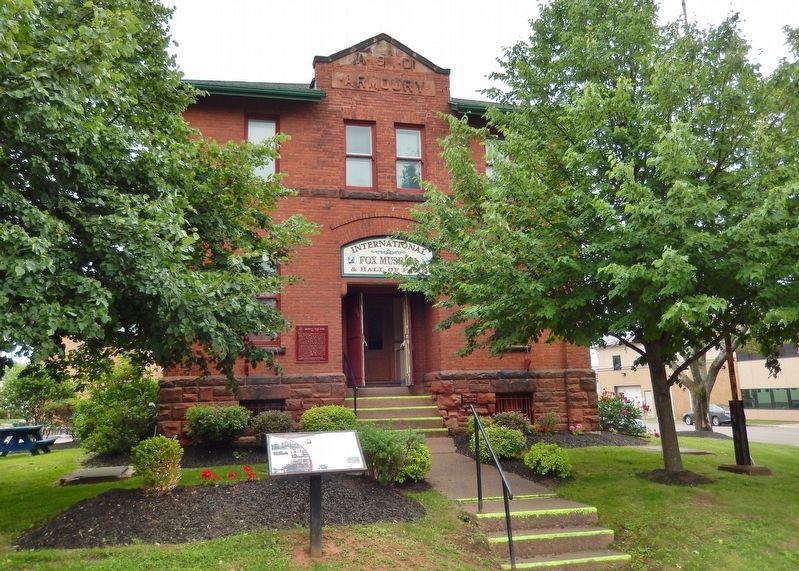 Photographed By Cosmos Mariner, July 17, 2019
5. The Summerside Armoury Marker (wide view)
was renamed B Squadron. When the closure of Canadian Forces Base Summerside offered an opportunity for modern premises, the militia moved to Slemon Park to take possession of a building with 33,000 square feet.

The Armoury, which had been designated a national heritage site in 1984, did not stay vacant for long. The Town of Summerside rented the building and then purchased it in 1996. Various municipal departments used it until the expansion of City Hall was completed in 2003.

In 2005, Wyatt Heritage Properties, the arts, heritage, and cultural complex for the City of Summerside, installed the International Fox Museum and Hall of Fame on the main floor of the building. Prince Edward Island was the first place in the world where foxes were successfully raised in captivity. In 2007, Gallery 33, an art exhibit space to showcase artists of the community, was established on the second floor. Public art, heritage, and cultural programming takes place inside the building and on the grounds.

(photo captions:)
• With the exception of a few months in 1916, when over 400 recruits trained out of the Summerside Armoury, the women of the community met in the building to knit and sew for soldiers overseas.
• The Summerside Town Hall, built in 1914 just south of the Armoury, was used during World War II as a headquarters by several organizations doing 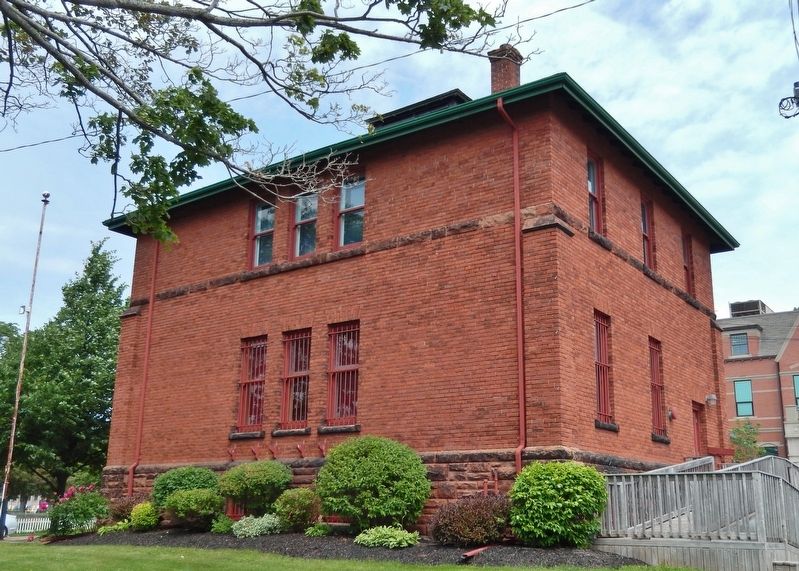 Photographed By Cosmos Mariner, July 17, 2019
6. The Summerside Armoury (southeast corner view)
war work.
• After the First World War local men formed a branch of the Great War Veterans Association and partly through their efforts the Soldier’s Monument was placed in Memorial Square in 1922.
• The B Squadron of the PEI Light Horse was organized in June 1914. Two months later these recruits, pictured in the Armoury doorway, were ready for service.

(background image:)
In December 1915 the 105th Battalion took the place of the 82nd Light Infantry Regiment and the Summerside Armoury was home to C Company as well as the local recruiting centre for the Canadian Expeditionary Force. Credit: MHCA027.2 (Randy Ross collection)

Topics. This historical marker is listed in these topic lists: Fraternal or Sororal Organizations • Patriots & Patriotism • War, World I • War, World II. A significant historical year for this entry is 1911.

Location. 46° 23.568′ N, 63° 47.453′ W. Marker is in Summerside, Prince Edward Island, in Prince County. Marker is on Summer Street south of Fitzroy Street, on the left when traveling south. Marker is located beside the sidewalk, directly in front of the 1911 Armoury Building. Touch for map. Marker is at or near this postal address: 33 Summer Street, Summerside PE C1N 0A2, Canada. Touch for directions.