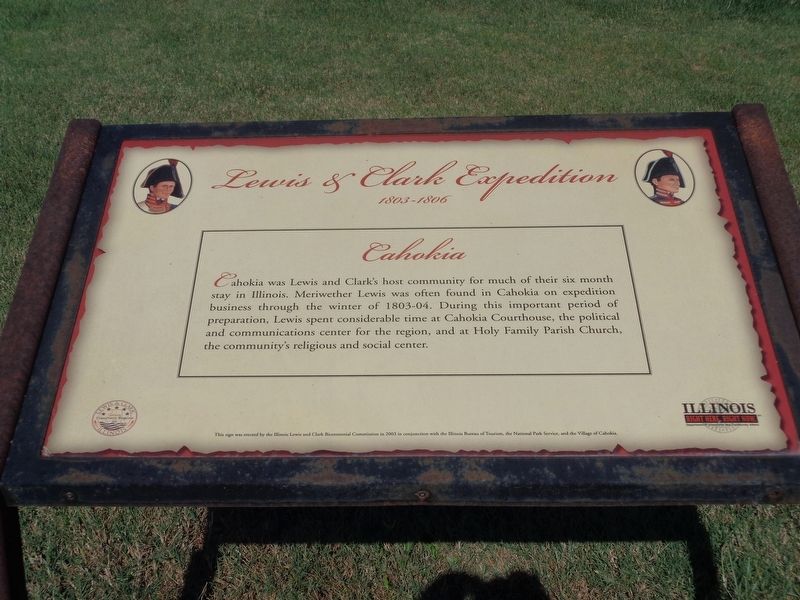 By Jason Voigt, October 1, 2019
1. Cahokia Marker
Inscription.
Cahokia was Lewis and Clark's host community for much of their six month stay in Illinois. Meriwether Lewis was often found in Cahokia on expedition business through the winter of 1803-04. During this important period of preparation, Lewis spent considerable time at Cahokia Courthouse, the political and communications center of the region, and at Holy Family Parish Church, the community's religious and social center. . This historical marker was erected in 2003 by The Illinois Lewis and Clark Bicentennial Commission. It is in Cahokia in St. Clair County Illinois

Cahokia was Lewis and Clark's host community for much of their six month stay in Illinois. Meriwether Lewis was often found in Cahokia on expedition business through the winter of 1803-04. During this important period of preparation, Lewis spent considerable time at Cahokia Courthouse, the political and communications center of the region, and at Holy Family Parish Church, the community's religious and social center.

Erected 2003 by The Illinois Lewis and Clark Bicentennial Commission.

Topics and series. This historical marker is listed in these topic lists: Churches & Religion • Exploration. In addition, it is included in the Lewis & Clark Expedition series list. A significant historical year for this entry is 1803.

Location. 38° 34.254′ N, 90° 11.332′ W. Marker is in Cahokia, Illinois, in St. Clair County. Marker is on East 1st Street just west of Church Street, on the right when traveling west. Marker is located at Cahokia Wedge (a grassy area), across from the Church of the Holy Family. Touch for map. Marker is at or near this postal address: 105 Church Street, East Saint Louis IL 62206, United States of America. Touch for directions. 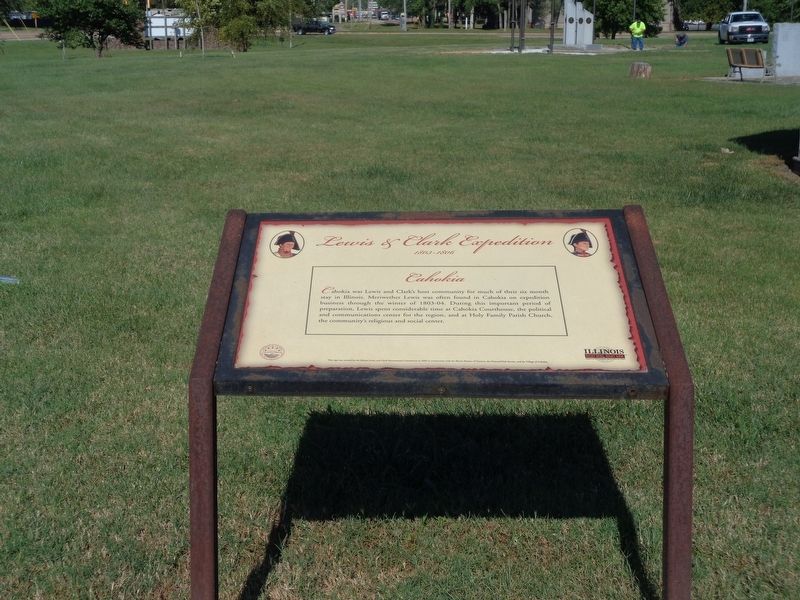 By Jason Voigt, October 1, 2019
2. Cahokia Marker
It is located in front of a gazebo and a war memorial on the Cahokia Wedge.

On or about March 8, 1803, First Civil Commandant (and interim governor) of Upper Louisiana, Captain Amos Stoddard, with his company of artillerists, commanded by 1st Lieut. Stephen Worrall, rendezvoused with Capt. Meriwether Lewis at Cahokia. The next day, March 9th, they proceeded across the Mississippi River to St. Louis where they marched to Government House to conduct the transfer of the Upper Louisiana, first from Spain to France, and the next day, March 10th, from France to the United States.

Upon his arrival at St. Louis, the Spanish governor sponsored a public dinner for the new governor, Amos Stoddard. The next day, after the completion of the transfer ceremony, the inhabitants of the town sponsored a public dinner and ball for the new federal government representative, Amos Stoddard. In such a situation, as Governor Stoddard shared in a letter to his mother, “these acts of civility I was obliged to return, and my station required it.” However, as a military officer on the frontier, Governor Stoddard had limited funds available to him to sponsor such an extravagant event. Therefore, he requested help from Capt. Meriwether Lewis and William Clark. Expecting that the governor would be reimbursed by the government (he was), they “loaned” Governor Stoddard $200 each. According to the letter to his mother from St. Louis in June 1804, the cost of the dinner and ball sponsored by Governor Stoddard was “622 dollars and 75 cents.” This was a considerable sum at that time.

The last letter ever written by Meriwether Lewis was to Major Amos Stoddard, dated September 22, 1809. He mentions the $200 Major Stoddard reported he was holding for him, writing, “...I hope you will therefore pardon me for asking you to remit as soon as is convenient the sum of $200 which you informed me you hold for me...” Meriwether Lewis then committed suicide on October 11, 1809. His financial situation at the time was certainly a contributing factor in his death.

After Major Stoddard’s death at Fort Meigs (Ohio) in May 1813, William Clark wrote to Lieut John O’Fallon, aide de camp to General Harrison, on June 18, 1813 regarding Amos Stoddard’s death. He wrote, “...Major Amos Stoddard I am informed is dead he owes me $200 cash which I lent him at St. Louis in the year 1804 for a public Dinner at that place, which given he was allowed for in his public accounts by the government...The Majr promised to pay as long he could raise funds, and as I was not in want of money when I saw him last at Pittsburgh, agreed that he should postpone payment until he should find it more convenient this spring.” He requested O’Fallon inquire with the executor of the estate for payment of the debt.

Apparently, transferring money to folks back in those days was far more difficult. In both accounts, Major Stoddard had informed these heroic men that he had not forgotten the debt and that he was holding the money for them. Unfortunately, he was not able to place the money into their hands. But it adds a previously unknown historical explanation to the reference of $200 in the famous Meriwether Lewis letter.