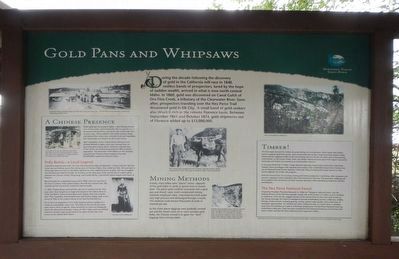 During the decade following the discovery of gold in the California mill race in 1848, restless bands of prospectors, lured by the hope of sudden wealth, arrived in what is now north-central Idaho. In 1860, gold was discovered on Canal Gulch of Oro Fino Creek, a tributary of the Clearwater River. Soon after, prospectors traveling over the Nez Perce Trail discovered gold in Elk City. A small band of gold-seekers also struck it rich in the remote Florence basin. Between September 1861 and October 1874, gold shipments out of Florence added up to $13,000,000.

Mining Methods
Initially, most strikes were “placer” mines - deposits of fine gold flakes in sandy or gravel areas of stream beds. The placer gold could be recovered with a gold pan and shovel. Later, more complicated mining methods employed water, channeled downhill under very high pressure and discharged through a nozzle. This method could remove thousands of yards of material per day.
As the richer placer diggings were gradually worked out and the miners went on to more lucrative gold fields, the Chinese moved in to glean the “skim” 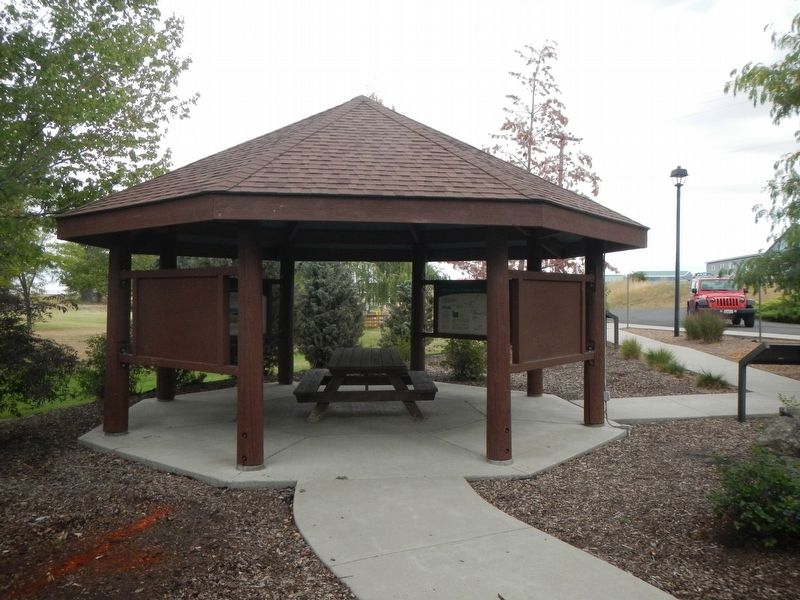 (side-bar on rleft:)
A Chinese Presence
When gold was discovered in Idaho, a few Chinese filtered into mining camps and communities like Grangeville to run restaurants and laundries, and doctor the miners with their country cures. Others settled in the warm canyons along the Salmon River where they cultivated fruits and vegetables and raised hogs and chickens to sell to the miners.
After completion of the Central Pacific Railroad, more Chinese flocked to Idaho when laws allowed them to buy exhausted mining claims. Historians estimate that in the 1870s, the Chinese accounted for 28% of Idaho’s population. The December 1904 edition of The Standard reported that Chinese miners shipped more than $5,000,000 in gold from Florence alone.
Polly Bemis - a Local Legend
Sometimes legends start small. She was only broomstick high and beautiful - a dance hall girl. Her real name was Lau Nathoy, but in the mining town of Warrens, Idaho, they called her Polly. She was born in China and when she was 14, her father sold her for some seed and pieces of gold. She was smuggled into Portland and sold for $2,500. At nineteen, so the story goes, Poly was pot of a poker game between her Chinese master, Hong King, and Charley Bemis, a prominent saloon keeper and mayor of Warrens.
Bemis bought her a boarding house and in 1890, when he was shot in the face in a fracas, Polly saved Charley's life with her crochet hook. She cleaned out his wounds and nursed him back to health.
In 1894, Charley Bemis married Polly; she was 41 and he was 46. Four years later, they bought acreage and moved to the Salmon River. In 1922, the Bemis house burned down and Charley died a few months later. Their neighbors, Pete Klinkhammer and Charley Shepp, built a new house for Polly so she could continue to live near her beloved river.
On a visit to Grangeville in 1923, Polly experienced the wonders of a movie, an automobile, and a train. She lived on the river for ten more years, but in 1933, at age 81, illness forced her to return to Grangeville where she died and was buried. In June of 1987, Polly's wish was fulfilled when here remains were moved back to her place on the river, now known as the Salmon River Resort. (side-bar on right:)
Timber!
The first major demand for timber occurred during the mining boom. Sluice boxes and rockers used to separate gold from gravel, were constructed with lumber whipsawed from nearby timber. Small sawmills supplied lumber to the new mining towns in the Elk City basin and to the growing communities on the Camas Prairie. Soon, the timber industry became part of the region’s economic landscape and timber was viewed as an inexhaustible resource.
In the post-World War II 1940s, a huge demand nationally made timber production a booming industry. More and bigger mills required more timber. Over a half-billion board feet of timber was cut on National Forest System between 1944 and 1956, prompting the Forest Service to more closely regulate the timber sale program.
With the arrival of the 21st Century, mining and timber production is declining, while recreation and tourism is playing a more important role in the economy of the area. The long-term challenge will be to balance new recreation and other resource demands while maintaining traditional activities and lifestyles.
The Nez Perce National Forest
Created by President Theodore Roosevelt in 1908, the “Nezperce National Forest” was the traditional home of the Nez Perce people. Nearly half of the Forest’s 2.2 million acres is classified as wilderness. From the dry, rugged canyons of the Salmon River to the moist cedar forests of the Selway drainage, the forest is managed to provide breathtaking scenery, wilderness, wildlife, fisheries, timber harvest, livestock grazing, mining, pristine water quality, and a wide array of recreation opportunities. So, whether you seek a wilderness hike or a scenic drive, a campsite away from all civilization or a spot in a bustling campground, the Nez Perce National Forest has something to offer you. There are many recreational and historical brochures at the Eimers Park Visitor Center and the Nez Perce National Forest Supervisor’s Office.

More about this marker. This marker is located in Eimers Park.

Regarding Gold Pans and Whipsaws. The story of Polly and Charley Bemis is told in the biographical novel A Thousand Pieces of Gold by Ruthanne McCunn and the 1991 fictionalize film by the same name.