The Cross at the Loop 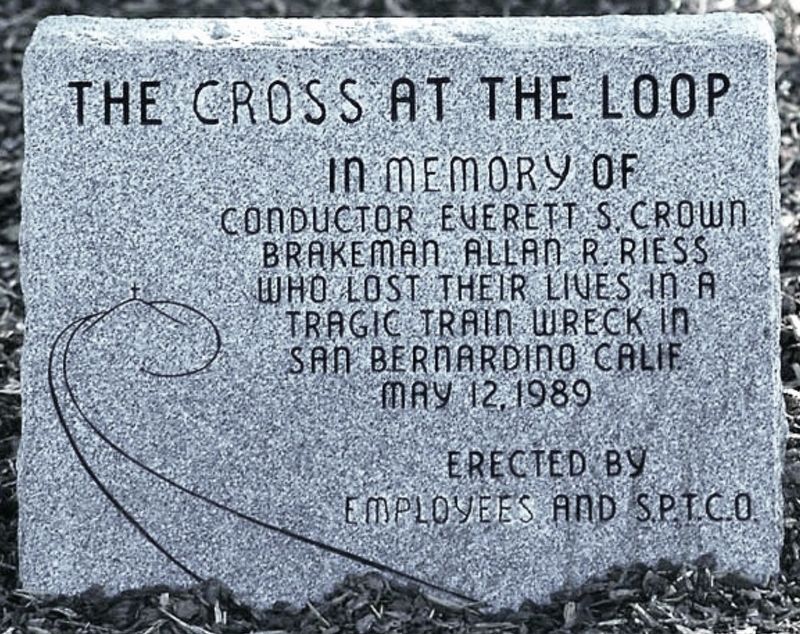 By Craig Baker, September 21, 2019
1. The Cross at the Loop Marker
Inscription.
The Cross at the Loop. . . In memory of conductor Everett S. Crown, brakeman Allan R. Riess, who lost their lives in a tragic train wreck in San Bernardino Calif. May 12, 1989. . . Erected by employees and S.P.T.C.O. . This historical marker was erected by Southern Pacific Railroad. It is Near Tehachapi in Kern County California

In memory of conductor Everett S. Crown, brakeman Allan R. Riess, who lost their lives in a tragic train wreck in San Bernardino Calif. May 12, 1989.

Erected by employees and S.P.T.C.O.

Topics. This historical marker is listed in these topic lists: Disasters • Railroads & Streetcars.

Location. 35° 11.948′ N, 118° 32.285′ W. Marker is near Tehachapi, California, in Kern County. Marker can be reached from Broome Road 0.3 miles north of Woodford-Tehachapi Road, on the left when traveling north. Located at the Tehachapi Loop, on private property. Touch for map. Marker is in this post office area: Keene CA 93531, United States of America. Touch for directions. 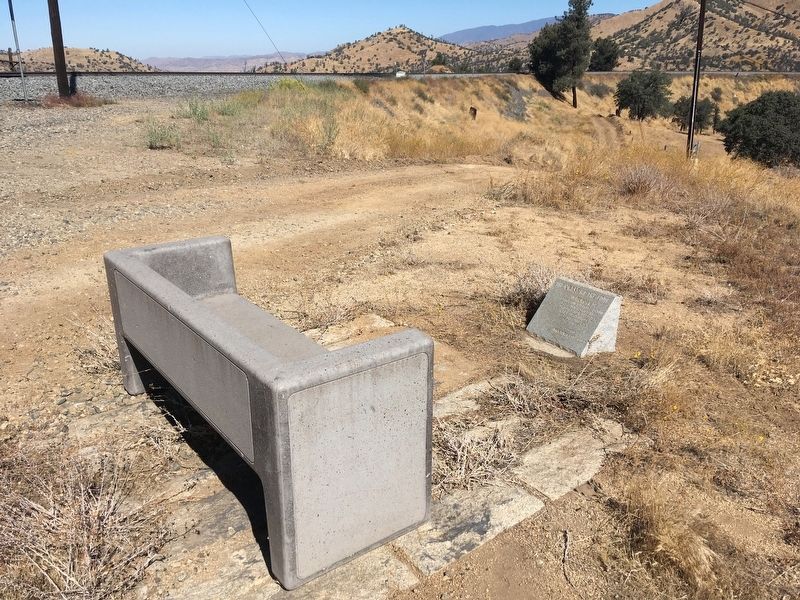 Regarding The Cross at the Loop. On May 12, 1989, at 7:30 am, an out-of-control Southern Pacific freight train speeding down the Cajon Pass derailed at a curve in San Bernardino. It was more than 3,000 tons heavier than estimated, and some of the brake systems were not working. The conductor could not slow the train as it approached a bend in the tracks adjacent to the Duffy Street neighborhood. The train was going more than 90 mph in a 40 mph zone when it derailed. The careening cars destroyed 7 homes, killing 2 trainmen, and 2 children in their home.

Two weeks later, a gasoline pipeline near the tracks erupted in flames hundreds of feet high, spraying 300,000 gallons of burning fuel onto homes and streets, killing 2 more residents and destroying 11 more homes. The pipeline had been damaged by the cleanup crews’ heavy equipment.

After the accidents, the railroad bought the homes that were damaged or destroyed, promising to turn the land into a memorial park. Thirty years later, this 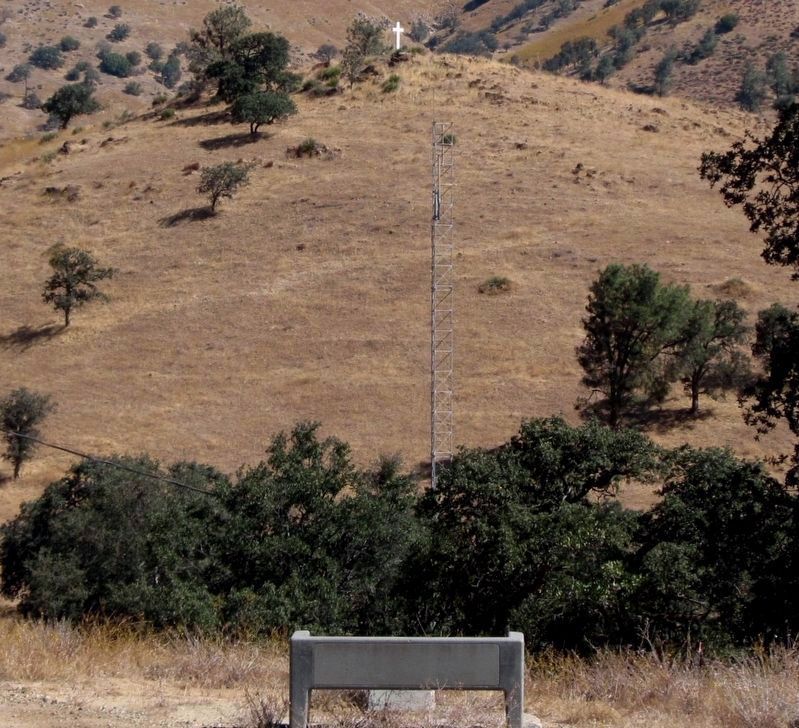 By Craig Baker, September 21, 2019
3. The Cross
On a hilltop within the Loop.
has still not happened. 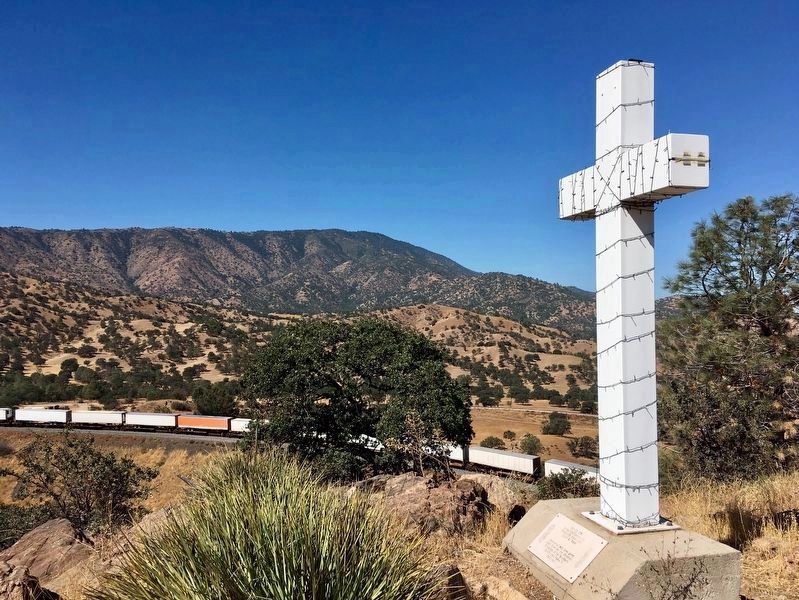 By Craig Baker, September 21, 2019
4. The Cross
With a string of lights wrapped around it, and a freight train in the Loop. 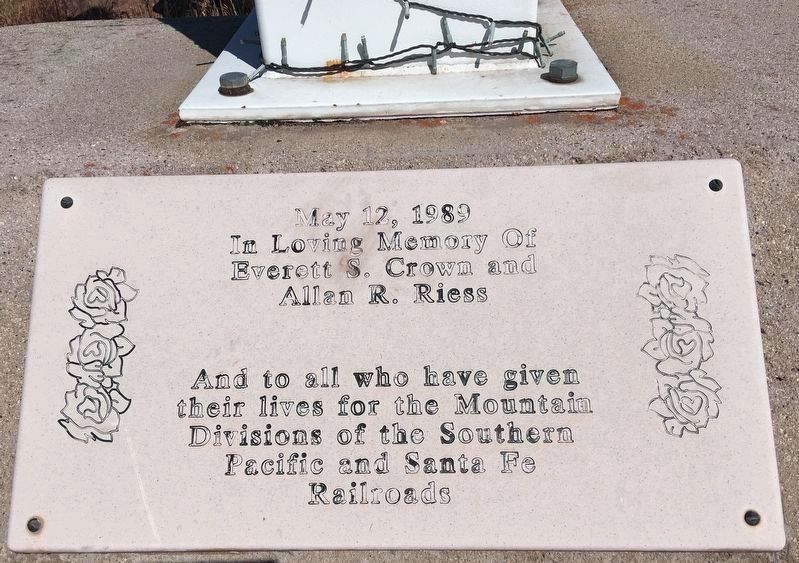