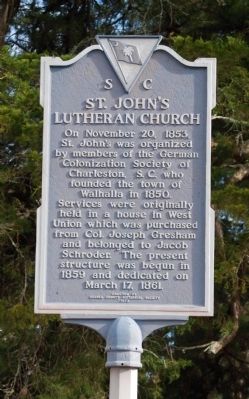 Photographed By Brian Scott, November 28, 2008
1. St. John's Lutheran Church Marker - Front
Inscription.
St. John’s Lutheran Church. . On November 20, 1853, St. John's was organized by members of the German Colonization Society of Charleston, S.C. who founded the town of Walhalla in 1850. Services were originally held in a house on West Union which was purchased from Col. Joseph Gresham and belonged to Jacob Schroder. The present structure was begun in 1859 and dedicated on March 12, 1861., John Kaufmann designed and directed the building of St. John's with the assistance of August Brennecke and members of the congregation. Most of the heart pine timbers were cut from the site on which the church stands. Many of the architectural features are distinctive and unique to St. John's. Except for the stained glass windows, placed in 1910, the church has changed little since 1861. . This historical marker was erected in 1972 by Oconee County Historical Society. It is in Walhalla in Oconee County South Carolina

On November 20, 1853, St. John's was organized by members of the German Colonization Society of Charleston, S.C. who founded the town of Walhalla in 1850. Services were originally held in a house on West Union which was purchased from Col. Joseph Gresham and belonged to Jacob Schroder. The present structure was begun in 1859 and dedicated on March 12, 1861.

John Kaufmann designed and directed the building of St. John's with the assistance of August Brennecke and members of the congregation. Most of the heart pine timbers were cut from the site on which the church stands. Many of the architectural features are distinctive and unique to St. John's. Except for the stained glass windows, placed in 1910, the church has changed little since 1861.

Topics. This historical marker is listed in these topic lists: Architecture • Churches & Religion • Settlements & Settlers. A significant historical month for this entry is March 1822. 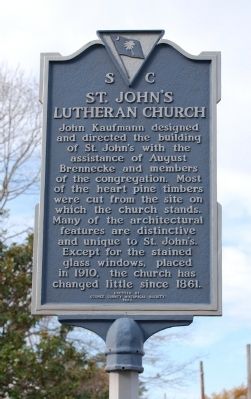 Also see . . .
1. St. John's Lutheran Church. St. John’s Lutheran Church was constructed between 1859 and 1861 under the direction of John Kaufmann, master builder from Baden, Germany, for the German Lutheran congregation of Walhalla. (Submitted on December 6, 2008, by Brian Scott of Anderson, South Carolina.) 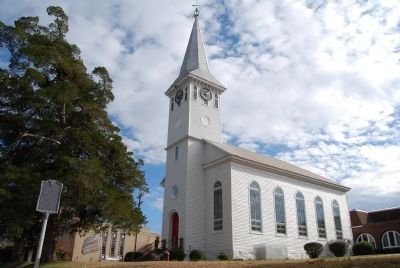 Exterior
St. John’s Lutheran Church is rectangular in shape, with a tower centered on the façade. An arched entrance with an archivolt door surround is at the base of the tower. Two arched windows of stained glass flank the tower. A small rose window and a round headed window are located in the first state of the tower, above the door. A molding projecting from the juncture of tower and gable roof separates the two stages of the tower. The upper stage of the tower had blind bulls-eyes and triple arched louvers on all four elevations. An octagonal broach spire with flared base terminates the tower. The pyramidal composition of the tower and the body of the church is repeated in the fenestration of the façade.

East and west elevations are five bays wide. The arched windows have pronounced moldings with keystones. Three arched windows are employed on the rear (south elevation) of the church, which is connected via a walkway to a modern education building. A Sunday School building occupies the 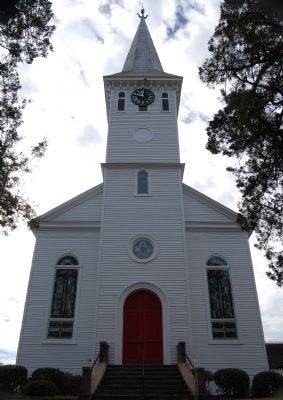 Photographed By Brian Scott, November 28, 2008
4. St. John's Lutheran Church - Front (North) Side
western segment of the site and is joined to the church by a brick arcade.

Interior
The interior of St. John’s have a stained glass panel in the anteroom behind the main entrance. Entrance to the nave is through double leaf, round headed doors placed on the east and west walls of the antechamber. Two aisles dive the name into three sections, with paneled wooden pews. At the south end of the interior is the pulpit which is “of the style used by the High Church of Germany and (is) built of ‘twisted wood.’ It is (attached to) the foundation of the Church and is raised above the altar.” Behind the altar are three stained glass windows with semicircular arches and double leaf doors inset in the bottom half of the windows flanking the pulpit.

A choir loft at the north end of the church is accessible via quarter turn staircases at either side. A large arched enclosure surrounds the organ, at the center of the lost, while a paneled rail embellished with six depressed arches spans the width of the church at the front of the loft. Massive cantilevered brackets support the loft, and the depressed arches are repressed below the loft, between the piers framing the staircases and the narthex.

The ceiling has an elliptical vault with a crown molding defining the wall surface from the ceiling. Due to its height the early heating system consisted 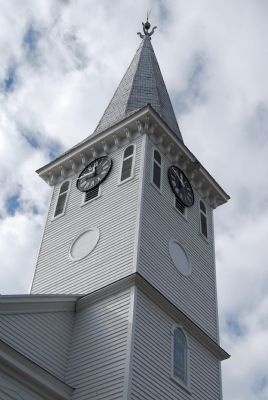 Structurally, St. John’s Lutheran Church is an unusual example of braced frame construction. The roof consists of rafters connected at the apex by a ridge, which is supported by a succession of posts through its length. Posts are joined to the ridge pole by “Y” braces. A large twelve by twelve beam rests on the ceiling joists and is situated directly beneath the ridge pole and is the foundation for the posts. Lateral thrust is controlled by a system of collar beams with additional braces. Ceiling joists are constructed by a system in three parts, the shorter east and west sections set at an upward angle. These are joined by a long middle joist, thus allowing for the vaulted ceiling. Diagonal beams extend from each corner of the attic and rest on the joists, giving added stability. The tower and steeple employ four fifteen by sixteen beams approximately sixty feet in length. These are secured by cross braces connecting the four principle uprights. A scaffolding of massive beams is the foundation for the steeple.

A brick Sunday School building, with gable roof, was built in 1931-1932 to the west of the church. It is connected to the church 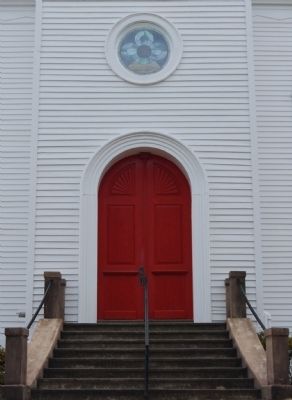 The church cemetery was established during the first years of the settlement of Walhalla. The earliest gravestone is dated 1851.

Surroundings
The church is situated on the fringes of Walhalla’s commercial district; however, since it occupies a large northwest corner lot, surrounding buildings of different or intrusive architectural character do not impinge on it. The presence of a large tree lined median on West Main Street also visually isolates the church from its relatively modern surroundings.

Significance
St. John’s Lutheran Church is located at 301 West Main Street in downtown Walhalla, South Carolina. Constructed between the years of 1859 and 1861 by John Kaufmann, the church is significant as a frame interpretation of a German vernacular church form, as influenced by the Victorian medieval revival trends. The church is also significant for its role in the religious history of Walhalla.

In 1848, a group of German immigrants formed the German Colonization Society in Charleston, South Carolina, with their purpose to settle in the South Carolina Piedmont. Under the leadership of John A. Wagener, Charleston’s most renowned citizen of German origin, the Colonization Society purchased land from Col. Joseph Gresham in what was then known as the Pickens District. Settlement followed and in 1853 St. John’s Evangelical Lutheran Church was formally organized and consisted of thirty-eight members. Six years later on January 21, 1859, the members resolved to start construction of St. John’s. Under the direction of John Kaufman, master builder, the church was erected with the help of the congregation. Completed on March 17, 1861, the church has been in continuous use since that time and presently retains a membership of approximately 250 individuals.

Religion
In its capacity as a religious organization, St. John’s fostered Newberry College between the years of 1868 and 1877. The college, a Lutheran institution located in Newberry, South Carolina, has suffered severe financial setbacks because of investments in Confederate bonds. After the conclusion of the Civil War, the college buildings were sold to pay debts. St. John’s with the general approver of the congregation set aside a building for the school, and in 1868 Newberry College and its president, Reverend Dr. J.P. Smeltzer, moved to Walhalla. To accommodate the professors and students, Reverend Smeltzer instituted English language services. After the departure of the college in 1877, the English Lutheran congregation was ultimately absorbed into St. John’s.

One of the first Lutheran churches in the Piedmont of South Carolina, St. John’s gave encouragement to the establishment of the New Bethlehem Lutheran Church of Anderson in 1876, and in the early part of the twentieth century it assisted in the formation of Trinity Lutheran Church of Greenville. At various times during the church’s history (1868, 1886, 1916) it hosted the annual convention of the South Carolina Lutheran Synod.

The church also has associations with a prominent Lutheran minister, Reverend John P. Smeltzer. Smeltzer, a supplemental pastor at St. John’s, was president of Newberry College before and during its interim in Newberry. Smelzter “organized an English Lutheran Church to accommodate the professors and students in Walhalla and St. John’s granted them the use of the German church.” When Newberry College left Walhalla in 1877, the Reverend remained and created the Walhalla Female College. He helped to organize the New Bethlehem Lutheran Church congregation on September 16, 1876, and was the president and vice-president of the South Carolina Lutheran Synod in 1872 and 1882, respectively.

Local History
A number of charter members of the organization of St. John’s were members of the German Colonization Society, the organization responsibly for the development of Walhalla. Selected from this same group came three intendants, five of town wardens, and one state senator, all of which indicates that St. John’s German Evangelical Lutheran Church had a socially and politically influential congregation, who actively participated in the founding and management of the town of Walhalla.

Architecture
St. John’s Lutheran Church is architecturally significant for its translation of the vernacular German church into frame construction. The broach spire with the low flared base, and the central tower, projecting from the façade, are elements common to German church architecture from the medieval era to the nineteenth century. The pulpit of “twisted wood” is of the style used by the High German Church. Structurally, the complex arrangement of trustees, collar beams, and braces which support and stabilize the tower, are significant as evidence of the builder’s competence.
(Source: National Register nomination form.)

Editor’s Note: It appears that the Rev. J. P. Smeltzer’s first name is not “John” as listed in the National Register nomination form reproduced above, but “Josiah.” Correspondent John F. Smeltzer of Fort Collins, Colorado, alerted us to this error. He cited one of the Newberry College historical markers in this database. The Rev. Smeltzer was president of the college starting in 1861 and Smeltzer Hall is named after him. Also, Contributing Editor Brian Scott reports that the first name “Joshua” is corroborated by George Benet Shealy in his 1990 book Walhalla: A German Settlement in Upstate South Carolina: The Garden of the Gods. In the book the reverend’s full name is listed as Josiah Pierce Smeltzer.
— Submitted August 6, 2009, by Brian Scott of Anderson, South Carolina.
Credits. This page was last revised on February 2, 2020. It was originally submitted on December 6, 2008, by Brian Scott of Anderson, South Carolina. This page has been viewed 1,823 times since then and 40 times this year. Photos:   1, 2, 3, 4, 5, 6. submitted on December 6, 2008, by Brian Scott of Anderson, South Carolina.
Share this page.