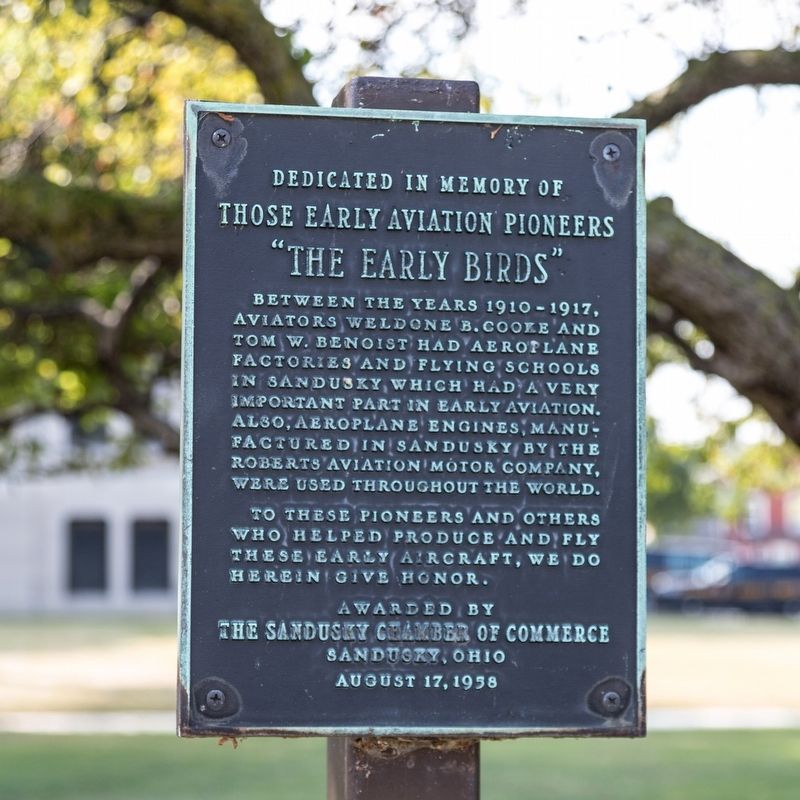 Photographed By J. J. Prats, August 7, 2019
1. “The Early Birds” Marker
Inscription.
“The Early Birds”. . Dedicated in memory of those early aviation pioneers “The Early Birds.” , Between the years 1910-1917, aviators Weldone B. Cooke and Tom W. Benoist had aeroplane factories and flying schools in Sandusky which had a very important part in early aviation. Also, aeroplane engines, manufactured in Sandusky by the Roberts Aviation Motor Company, were used throughout the world. , To these pioneers and others who helped produce and fly these early aircraft, we do herein give honor. . This historical marker was erected in 1958 by The Sandusky Chamber of Commerce, Awarded on August 17.. It is in Sandusky in Erie County Ohio

Dedicated in memory of those early aviation pioneers “The Early Birds.”

Between the years 1910-1917, aviators Weldone B. Cooke and Tom W. Benoist had aeroplane factories and flying schools in Sandusky which had a very important part in early aviation. Also, aeroplane engines, manufactured in Sandusky by the Roberts Aviation Motor Company, were used throughout the world.

To these pioneers and others who helped produce and fly these early aircraft, we do herein give honor.

Erected 1958 by The Sandusky Chamber of Commerce, Awarded on August 17.

Topics. This historical marker is listed in this topic list: Air & Space. A significant historical year for this entry is 1910.

Location. 41° 27.269′ N, 82° 42.715′ W. Marker is in Sandusky, Ohio, in Erie County. Marker is on West Washington Street (Route 6) west of Jackson Street, on the right when traveling east. It is in Washington Park. Touch for map. Marker is in this post office area: Sandusky OH 44870, United States of America. Touch for directions.

Other nearby markers. At least 8 other markers are within walking distance of this marker. The Boy with the Boot (a few steps from this marker); Sandusky / Erie County (within shouting 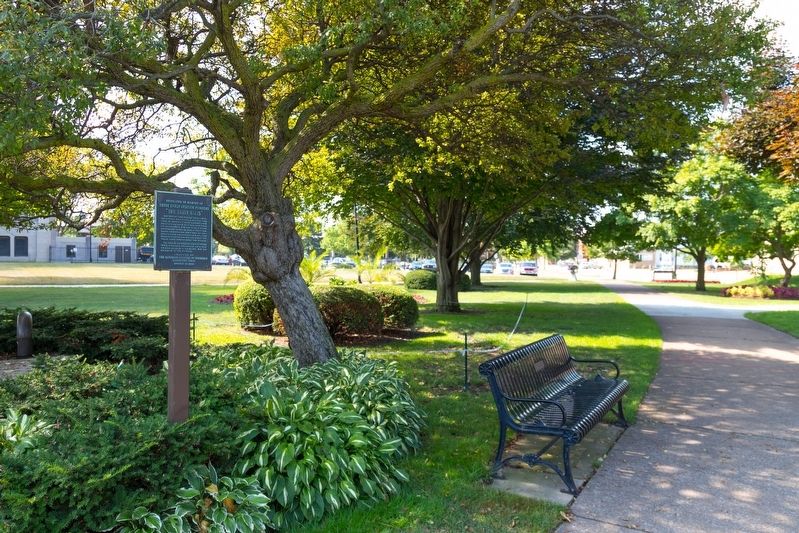 Regarding “The Early Birds”. “The Early Birds of Aviation” is an organization of aviation pioneers who flew solo before December 17, 1916. There were 598 original Early Birds. There is a bronze plaque with their names that hangs at the Smithsonian Institution’s Udvar-Hazy Center in northern Virginia.

Basis for membership in E.B. was actual solo flight as a pilot prior to December 17, 1916, which meant prior to America's entry into the First World War, or for European pilots prior to August 4, 1914. Although the ranks of

via Wikipedia Commons, June 10, 2017
3. Early Birds of Aviation Logo
these old timers is thinning somewhat, new eligible pioneers are being found today, with the result that new members are still being taken into the organization. Nearly every issue of the CHIRP introduces another bird who flew prior to World War I and whose exploits have been authenticated to make him eligible for membership. Today, 29 years after the founding, the Early Birds are very much a live organization interested in aviation progress as well as past history, and meeting as opportunities permit, both on a sectional and national basis. Their presence at national air races and shows has always been symbolized by the checkered caps they wear.

2. Early Aviation in the Sandusky Area. This is a 12 page transcript of a 1969 radio talk by Reinhadrt Ausmus, an aviation pioneer and an Early Birds member who worked closely with Tom Benoist, on WLEC in Sandusky. Excerpt:

Then another time, I broke the engine. I took it to a garage and had it on four stilts and said, now look at it and fix this crankcase, but for God’s sake, dont’s start it unless I'M HERE! Don't let anybody else start it.

I went back to the garage a couple of days later and a fellow told me —you and the garage are in trouble— some foolish mechanic decided he wanted to hear the doggone airplane engine run, so he pulled the propeller over and away she went. It 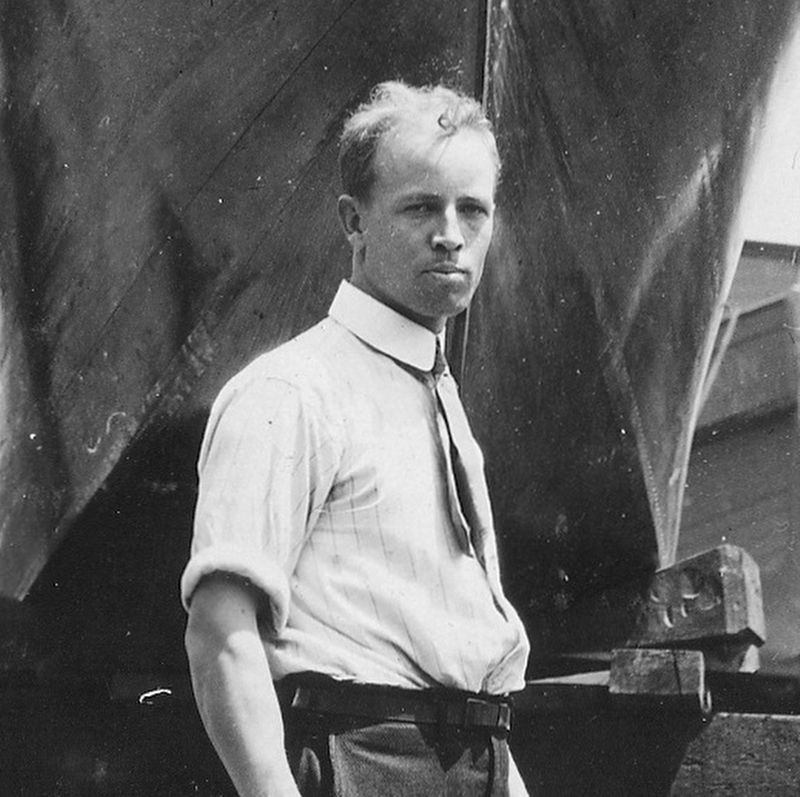 I was an innocent kid and they said they were going to lock me up if I didn’t pay for the damage to all those cars, and took my engine away from me until I paid the damages. Not having the money to hire a lawyer, I just simply lost out on the thing.

... By late 1912, Cooke had arrived in Sandusky, Ohio where he formed the Cooke Aeroplane Co. to build aircraft of his own design. The Roberts Motor Company let him use a portion of their facility to work on his aircraft. ... Cooke died on September 6, 1914 in an aircrash in Pueblo, Colorado.

Thomas W. Benoist (1874–1917) was an American aviator and aircraft manufacturer. In an aviation career of only ten years, he formed the world's first aircraft parts distribution company, established one of the leading early American aircraft manufacturing companies and a successful flying school, and from January to April 1914 operated the world's first scheduled airline.
...
On June 14, 1917, Benoist 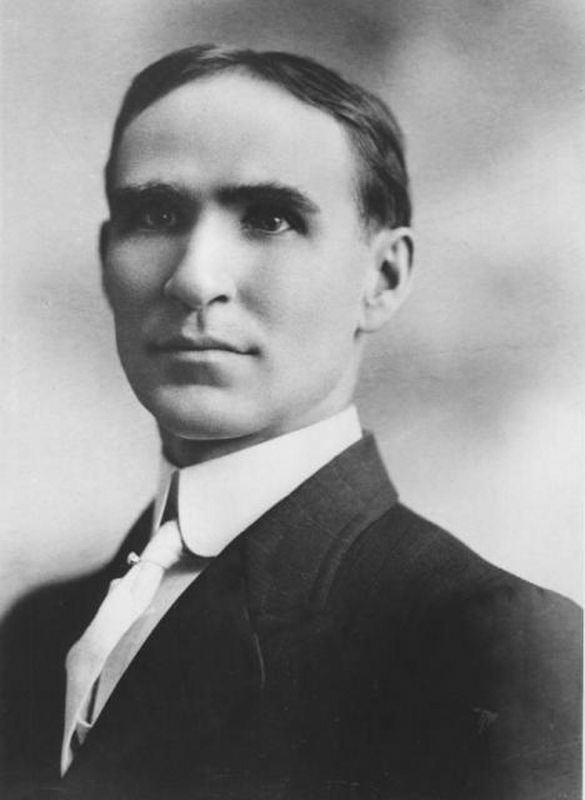 by unknown photographer via Wikipedia English, undated
5. Thomas W. Benoist (1974–1917)
died when he struck his head against a telephone pole while stepping off a streetcar in front of the Roberts Motor Company in Sandusky. With him gone and facing continued financial problems, the Benoist Aircraft Company and the Roberts Motor Company both went out of business in early 1918. Benoist Aircraft had built just over 100 airplanes in its history by the time it ceased operations. 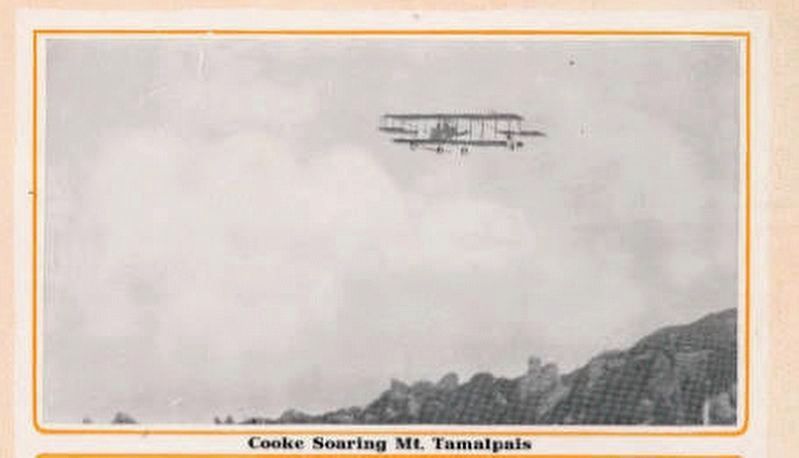 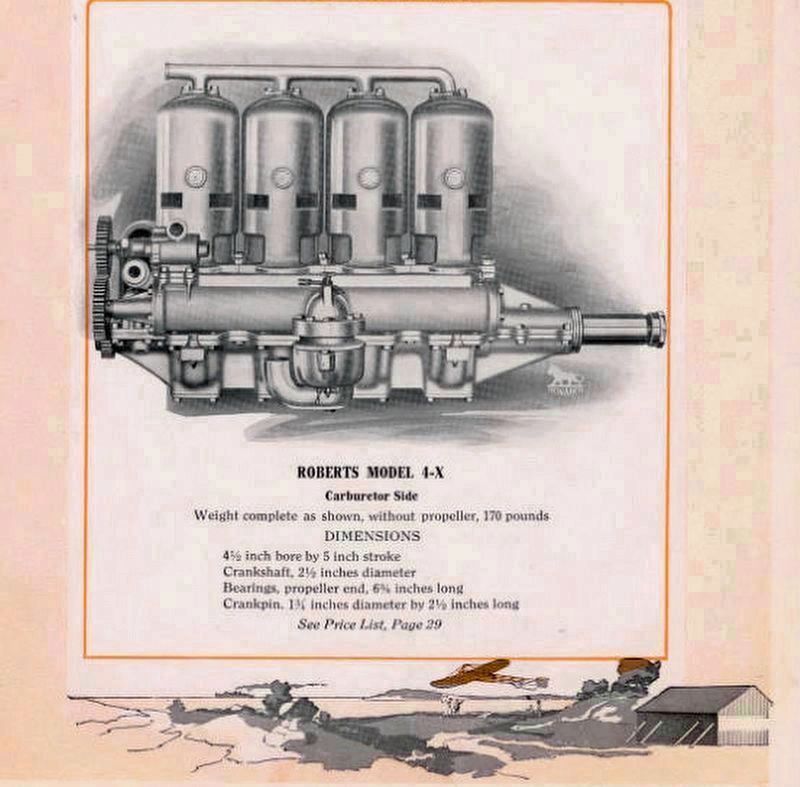