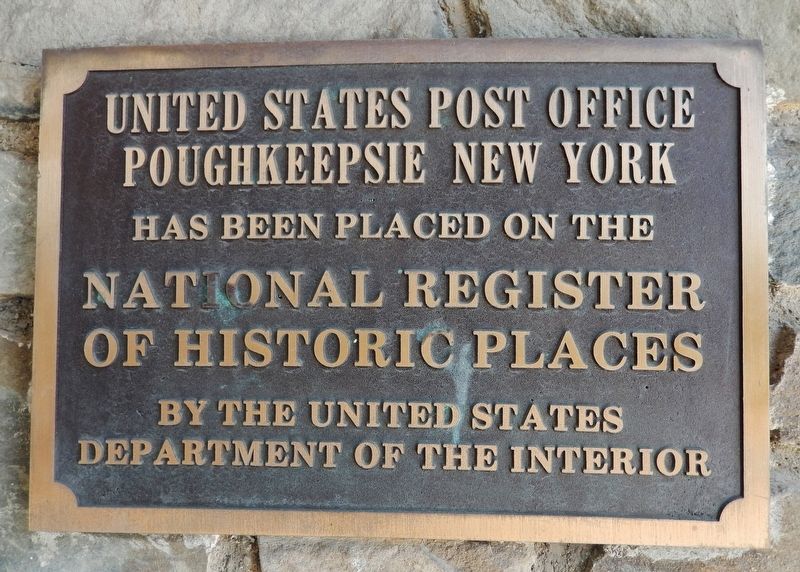 Location. 41° 42.435′ N, 73° 55.657′ W. Marker is in Poughkeepsie, New York, in Dutchess County. Marker can be reached from the intersection of Mansion Street and Civic Center Plaza, on the right when traveling west. Marker is mounted at eye-level, directly on the subject building, just to the right of the main front entrance. Touch for map. Marker is at or near this postal address: 55 Mansion Street, Poughkeepsie NY 12601, United States of America. Touch for directions. 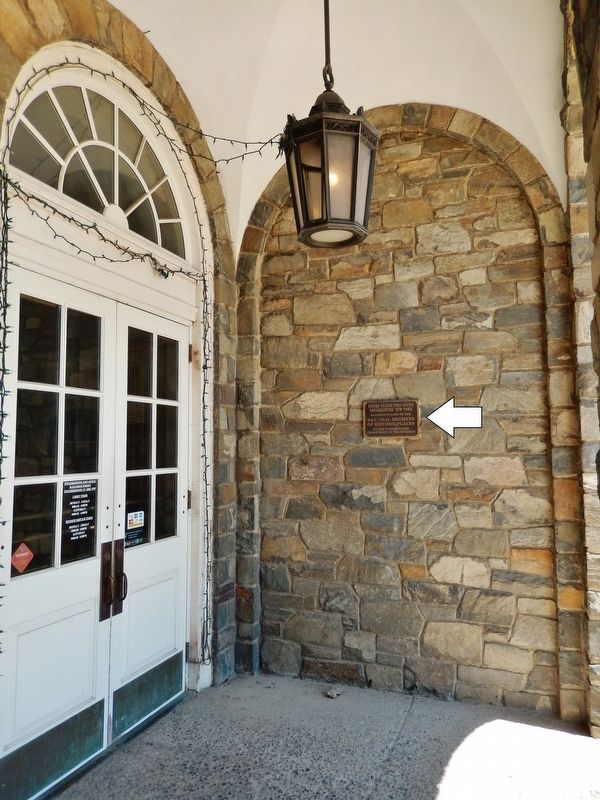 More about this marker. There is a near-duplicate of this marker mounted at knee-level, near the Mansion Street sidewalk, on the right side of the main front staircase.

Regarding United States Post Office Poughkeepsie New York. National Register of Historic Places #88002413. Dedicated in 1937 by President Franklin D. Roosevelt, a Hyde Park native who insisted on preserving the Dutch heritage of the area through the use of fieldstone and was heavily involved in the design process. 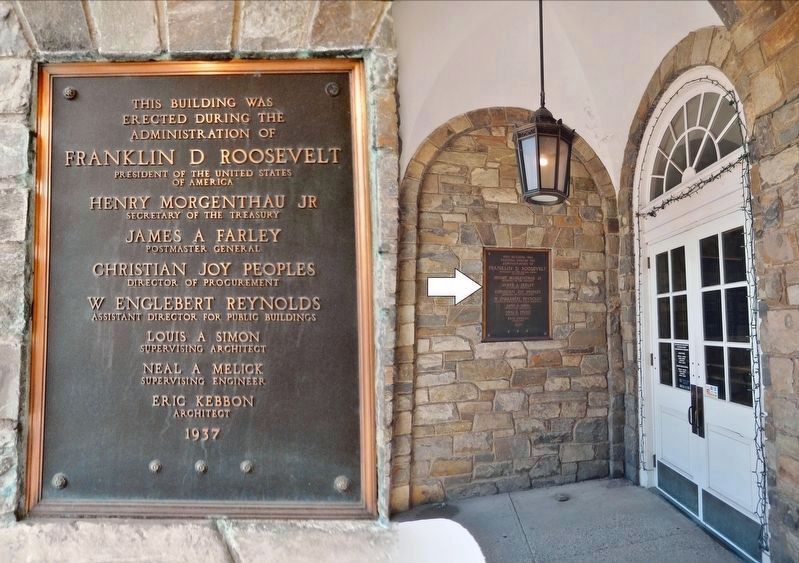 (near-duplicate of the building cornerstone inscription) 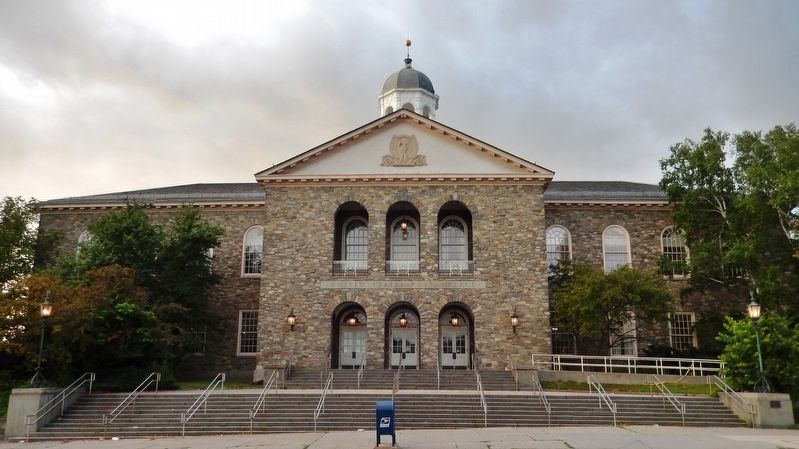 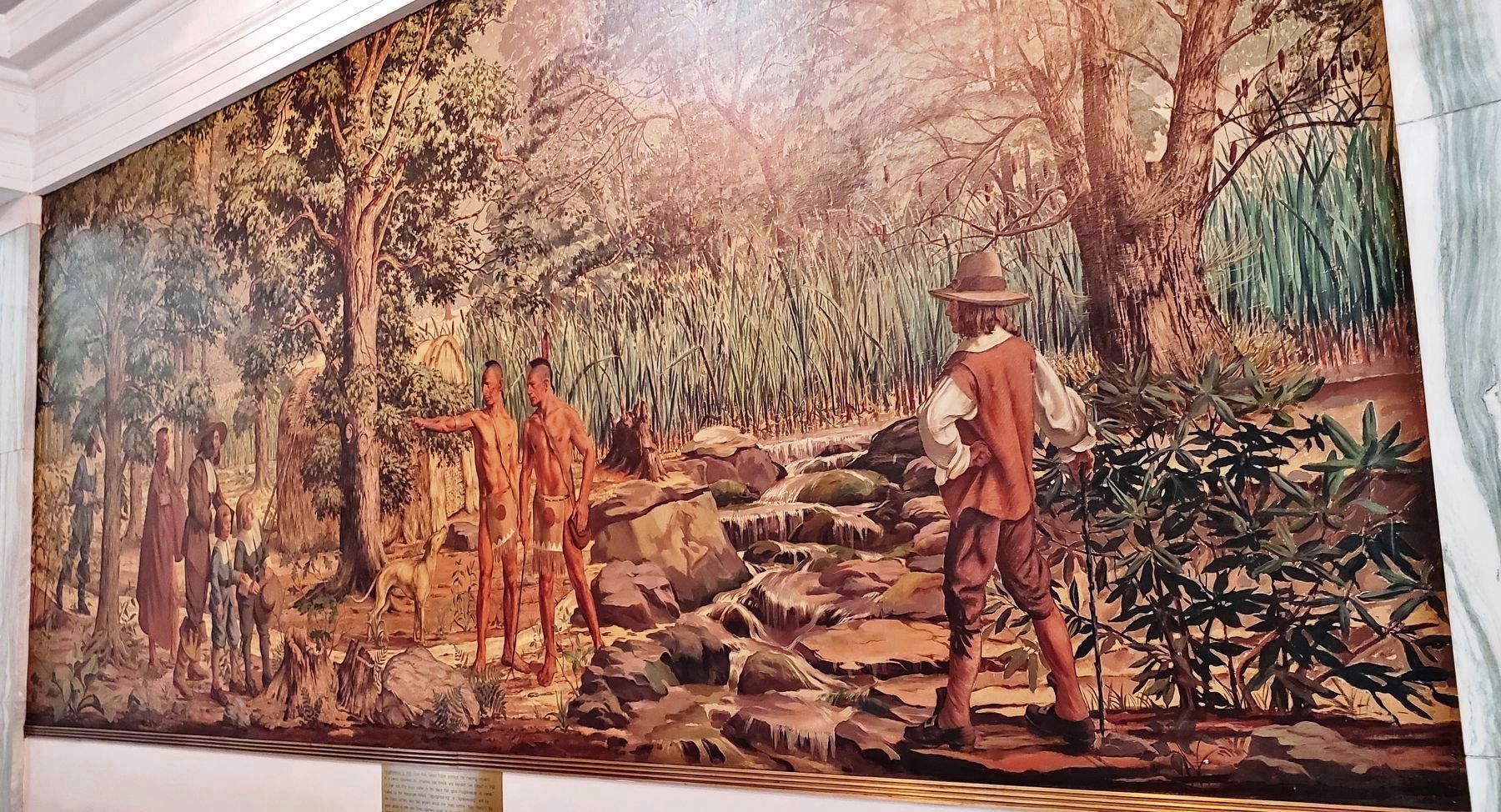 By Cosmos Mariner, July 1, 2019
7. Poughkeepsie 1692 Mural (Post Office lobby • 2nd floor • east wall)
(from legend below mural) Poughkeepsie c. 1692. East Wall. Gerald Foster portrays the meeting, recalled in a sworn statement by Johannes Van Kleeck and Myndert Den Bogert in 1742 of their visit fifty years earlier to the place that gave Poughkeepsie its name. Called by the Wappinger Indians "Uppuqui-ipis-ing" or "Apokeepsing" and by the Dutch settlers who had arrived about five years before "Rust Plaets", this area about a mile and three quarters south of the present Courthouse was a resting place for travelers in the woods by a stream and waterfall. Shown are the two men as children, accompanied by several settlers, encountering Wappinger Indians along the path that began as an Indian trail and eventually became the Post Road from Albany to New York. In the woods, in the background, is a hut made of reeds such as the Indians would have used as a wayside shelter. Poughkeepsie translates to "reed covered lodge by the little watering place". 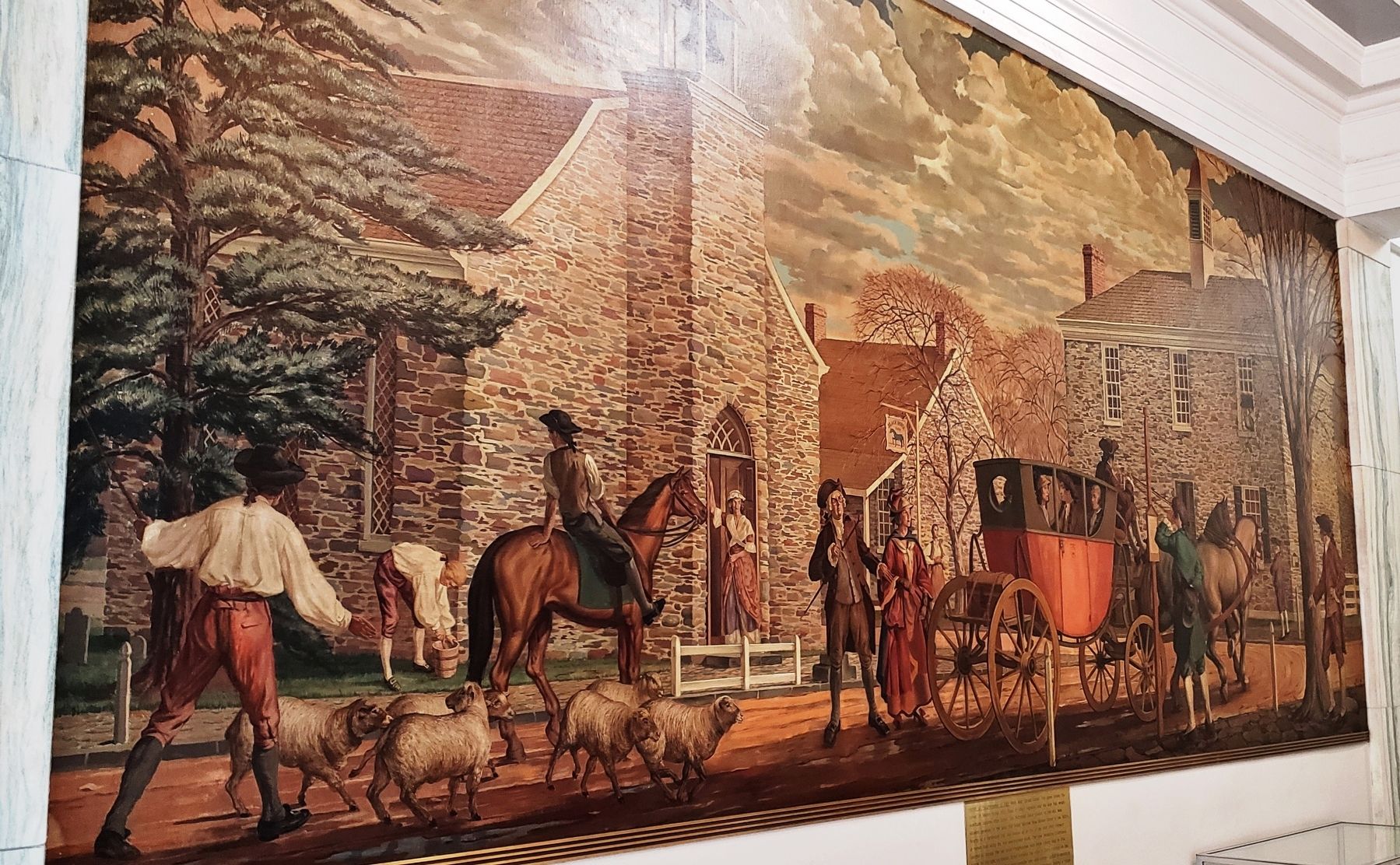 By Cosmos Mariner, July 1, 2019
8. Hamlet of Poughkeepsie 1750 Mural (Post Office lobby • 2nd floor • west wall)
(from legend below mural) Hamlet of Poughkeepsie c. 1750. West Wall. Gerald Foster. The panel shows the corner of Market Street (Post Road or King's Highway) and the lane that would eventually become Main Street. The Reformed Dutch Church, to the left, was situated generally in the area that would become New Market Street in the 1920’s. Nearby is a farmhouse that also serves as an inn, a use that often followed in homes built along the few well-traveled roads. The new fieldstone Courthouse, second to occupy the site since Poughkeepsie was made county seat in 1714, stands to the right on Market Street between the road to Union Landing on the river and Filkintown Lane. The artist portrays men and women typical of provincial inhabitants of the era going about their occupations and travelers making a stage stop along the King's Highway. Public notices have been posted outside the stone courthouse for the benefit of those who could read. 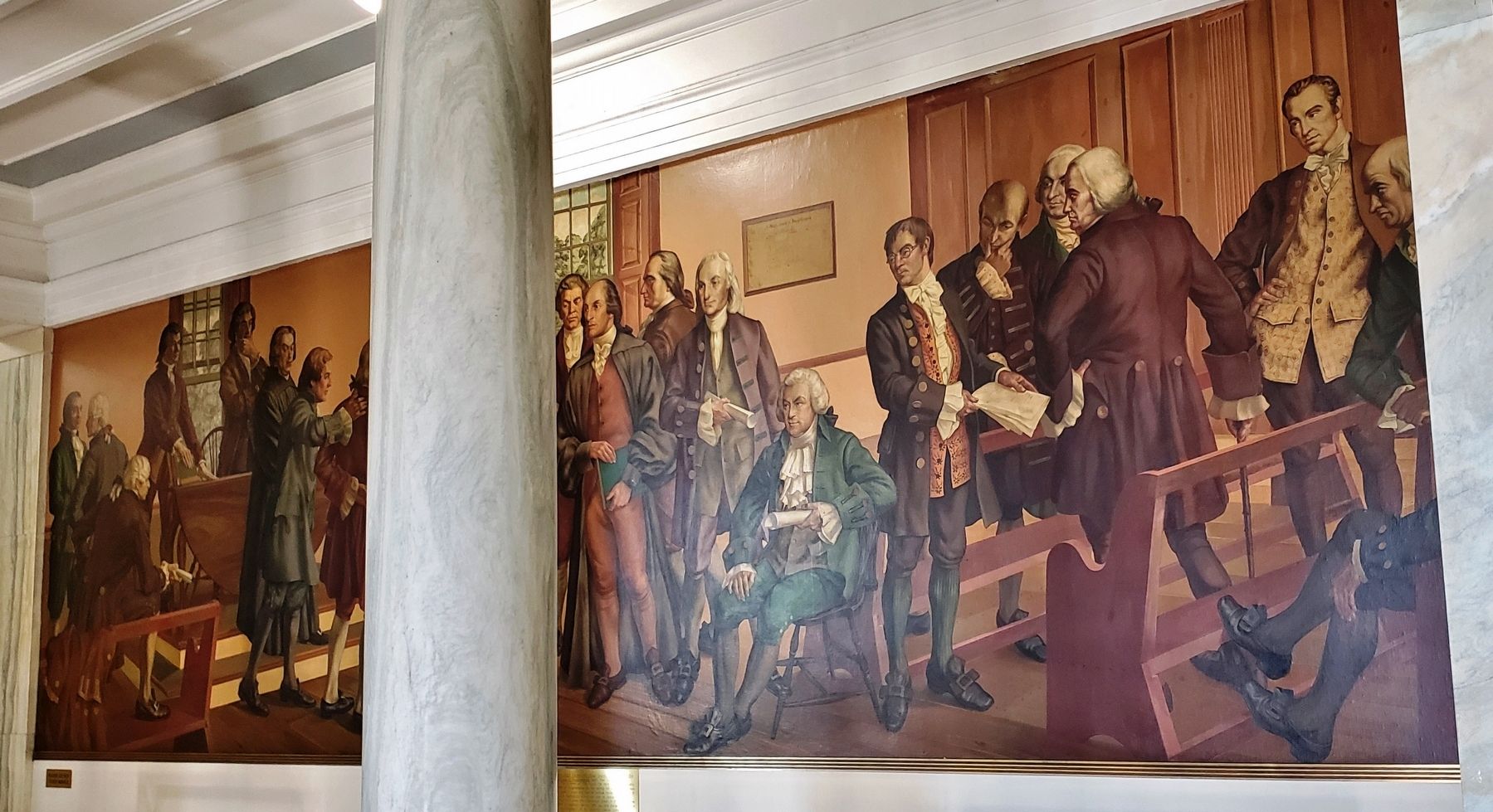 By Cosmos Mariner, July 1, 2019
9. New York Ratifies the U.S. Constitution (Post Office lobby • 2nd floor • North Wall)
(from legend below mural) July 26, 1788. New York State Ratifies the United States Constitution in the Dutchess County Courthouse in Poughkeepsie. North Wall. Gerald Foster. Canvas Installed 1938. The summer of 1788 found the third Dutchess County Courthouse in the hamlet of Poughkeepsie as the setting for one of the most dramatic ideological struggles in state and national political history. From June 17 to July 26 the New York Ratification Convention met to debate our entry into the new republic proposed under the Constitution drawn in Philadelphia the previous year. Proponents of ratification led by John Jay and Alexander Hamilton were in the minority. Anti-federalists led by Governor Clinton, comprised the Majority of delegates. They opposed ratification based upon the absence of provisions that would guarantee personal freedoms and clarify state's rights. Failure to ratify could have brought down the fledgling nation, but of what good would have been our struggles, if liberty were to succumb? Foster's painting shows the moment following six weeks of protracted and difficult debate when the followers of Clinton and those of Hamilton were brought to accommodation by the diplomacy of Dutchess County delegate Melancthon Smith. In a close vote of 30 to 27 the Convention voted to ratify in "full confidence” that its concerns would be dealt with promptly. The result was a stronger nation and the Bill of Rights.

The artist's rendition of the interior of the Courthouse is based upon careful historical and architectural research of the period, reviewed closely by FDR. The painting was developed as a popular poster by the New York State Commission on the Bicentennial of united States Constitution for its 1988 celebration.