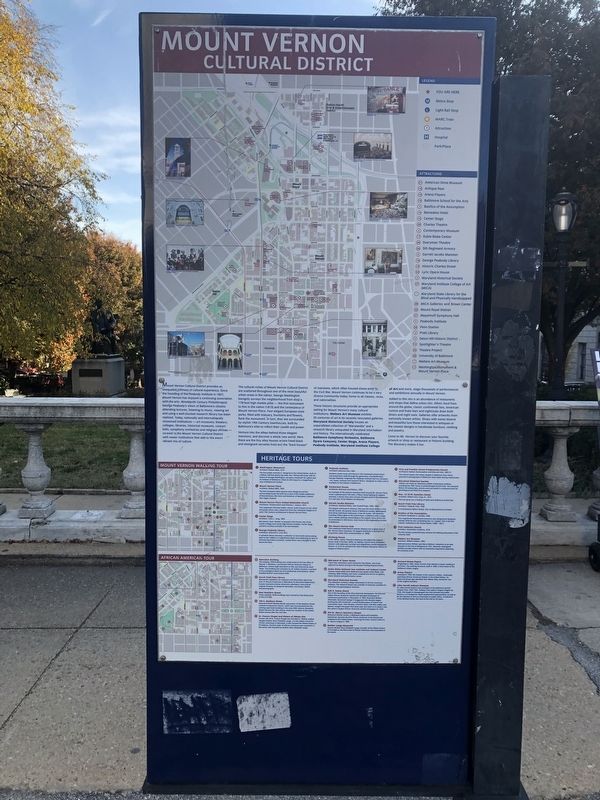 The cultural riches of Mount Vernon Cultural District are scattered throughout one of the most beautiful urban areas in the nation. George Washington benignly surveys the neighborhood from atop a 178-foot high marble pillar — the first monument to him in the nation (1815) and the centerpiece of Mount Vernon Place. Four elegant European-style parks, filled with statuary, fountains and flowers, flank the monument. In turn, they 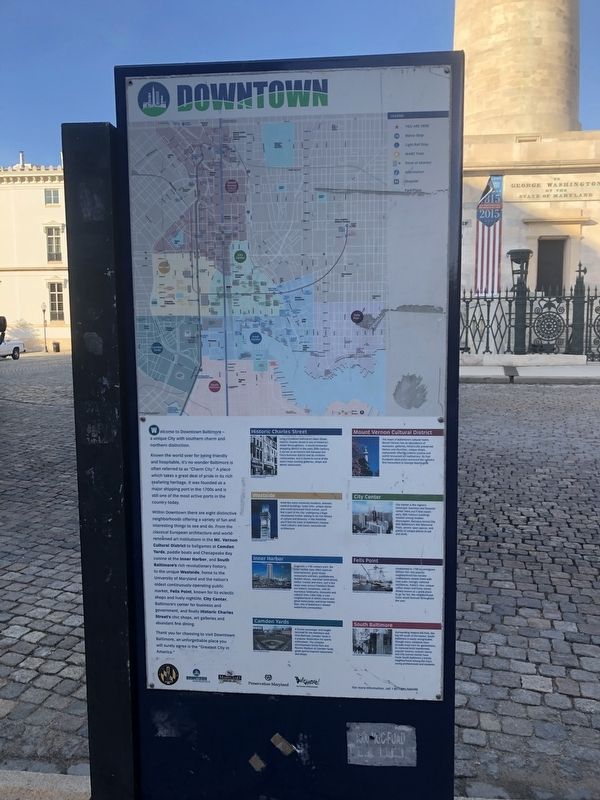 Venture into alleys behind these elegant mansions, and discover a whole new world. Here there are the tiny alley houses where freed black and immigrant servants lived and the "back houses" of mansions, which often housed slaves prior to the Civil War. Mount Vernon continues to be a very diverse community today, home to all classes, races and nationalities.

Added to this mix is an abundance of restaurants and shops that define urban chic. Ethnic food from around the globe, classic continental fare, American cuisine and lively bars and nightclubs draw both diners and night owls. Galleries offer artworks from nationally known artists. Shops with wares bizarre and beautiful lure those interested in antiques or the newest design in handmade furniture, clothing and jewelry.

Come to Mt. Vernon to discover your favorite artwork or shop or restaurant or historic building. The discovery makes it fun.

Heritage Tours
Mount Vernon Walking Tour
1. Washington Monument
Architect: Robert Mills, 1815
The first public monument designed in the United States, built on a hilltop 100 feet above sea level, the 178-foot tall tower with its statue of George Washington, became a landmark for sailors and an emblem of Baltimore. Climb its 225 steps for a magnificent view of Baltimore's harbor.

5. George Peabody Library
Architects: Edmund G. Lind, 1876
A scholarly library housing a collection of rare books (some dating back to the 1400s) in a magnificent stack room featuring six tiers of intricate decorative ironwork, marble floors and a skylight 61 feet above the floor.

6. Peabody Institute
Architect: Edmund Lind, 1860
Students study music and dance in this renowned conservatory and preparatory built through the generosity of philanthropist George Peabody. Originally the Peabody Institute had four divisions—art, music, lectures and research library—designed to make culture available to the citizens of Baltimore.

7. Hackerman House
Architects: Niernsee and Nielsen, 1850
An example of the opulent mansions built around Mt. Vernon Place, it has a palatial entry hall with a Tiffany dome lighting its elegant stairway, a secret room and a former terrapin pond in the basement. It is now part of the Walters Art Museum.

8. Garrett Jacobs Mansion
Architects: Sanford White, John Russell Pope, 1884, 1902
The largest rowhouse in America, this was the home of Mary Frick Garrett Jacobs, the grande dame of Baltimore society. Redesigned from three individual rowhouses, it has 40 rooms, 100 windows including Tiffany glass in the Grand Foyer, a ballroom with a state and a marble stairway descending to the supper room, which can accommodate to 200 diners. Now home to the Engineering Society of Baltimore.

9. The Mount Vernon Club
This unaltered Greek Revival exterior displays the original style of Mt. Vernon Place mansions. Its elegant simplicity is derived from proportion rather than ornamentation. (c. 1840)

10. Marburg House
In the 1890s, owner Theodore Marburg remodeled the original house, built in the late 1840s, by adding a fourth story, limestone exterior with elaborate carvings and magnificent carved woodwork interior. In 1915 he worked here with President Woodrow Wilson on League of Nations plans.

11. First and Franklin Street Presbyterian Church
Architects: Nathan Starkweather and Edmund Lind, 1853-74
This church boasts the tallest steeple in Baltimore from which panoramic photographs of Baltimore were taken during construction.

12. Maryland Historical Society
Visitors can enjoy an extensive exhibit of Maryland artifacts, including the 1847 home of philanthropist Enoch Pratt. The research library of manuscripts, photos and rare books is a treasure trove for genealogical and historical research.

15. Basilica of the Assumption
Architect: Benjamin H. Latrobe, 1806
This magnificent Neoclassical structure was designed by Benjamin Latrobe while he was completing the U.S. Capitol. This is the first Catholic Cathedral in the United States. (1806-1821)

African American Tour
1. Banneker Building
The existing 1903 building was constructed as the law office of Warner T. McGuinn, a prominent African American lawyer in Baltimore, whose legal education at Yale was financed by Mark Twain. The building was overseen by W. Ashbie Hawkins, a partner in the prestigious black law firm McMechan and Hawkins, which handled NAACP cases before WWI.

3. East Hamilton Street
These existing 1840s buildings were owned by free blacks prior to the Civil War.

104 E. Madison Street
Reverend Hiram Rhodes Revels was pastor of the Madison Street Colored Presbyterian Church, which was incorporated into the existing apartment building in the early 20th century. Reverend Revels became the first African American member of the United States Senate after the Civil War.

5. St. Francis Chapel and Sisters of Oblate Site
Former site of St. Francis Chapel was founded in 1828 by Haitian refugee Mother Mary Elizabeth Lange. It is the oldest school for African Americans in Maryland. It also housed the Oblate Sisters of Providence, the first order of African American nuns anywhere in the world, also founded by Mother Mary Elizabeth Lange.

6. 800 block of Tyson Street
These tiny rowhouses were owned by free blacks, who lived adjacent to slaves serving in the houses fronting Howard Street.

8. Maryland Historical Society
The collection contains a large assortment of African American artifacts. The research library has a wealth of materials available for historical and genealogical research.

9. 628 N. Eutaw Street
Site of the founding of the Afro-American Newspaper, the first and oldest African American owned and operated newspaper in continuous publication in Maryland. In 1892, Reverend William Alexander, Reverend George F. Bragg and John Murphy began printing the Afro-American, a small weekly paper of church and community news. John Murphy, a former slave, Civil War soldier and laborer, bought the paper that same year and went on to build it into the nation's largest African American owned newspaper by 1922.

12. Orchard Street Church
Originated in 1825, when Truman Pratt started a prayer meeting in his home. The existing structure, built in 1882, is now home to the Baltimore Urban League.

13. Arena Players
Founded in 1952, the theater is the country's oldest, continually operating African American theater in the United States. An historical street sign identifies Sam Wilson Way, named for one of the original founders.

14. Lillie Carroll Jackson Museum
Dr. Lillie Carroll Jackson was president of the Baltimore NAACP chapter from 1935-1969, making it the nation's largest chapter by 1946. She fought to desegregated the City's private and public facilities and worked for equal employment opportunities, as well as for the election of African-Americans to public office. A matriarch of the Mitchell family, she lived at the site for 25 years.

Known the world over for being friendly and hospitable, it's no wonder Baltimore is often referred to as "Charm City." A place which takes a great deal of pride in its rich seafaring heritage, it was founded as a major shipping port in the 1700s and is still one of the most active ports in the country today.

Camden Yards
A former passenger and freight terminal for the Baltimore and Ohio Railroad, Camden Yards is a popular destination for sports enthusiasts. The complex encompasses Oriole Park and Ravens Stadium at Camden Yards, great sports-inspired restaurants and shops.

South Baltimore
Surrounding Federal Hill Park, the big hill south of the harbor, South Baltimore is easily recognizable. Though many residents have proudly lived here for generations, its restored brick townhomes, popular taverns eclectic stores and City-owned market have made South Baltimore a trendy neighborhood among the City's young professionals and students.

Editor’s want-list for this marker. A wide-view shot of the marker in context. • Can you help?
Share This Page.