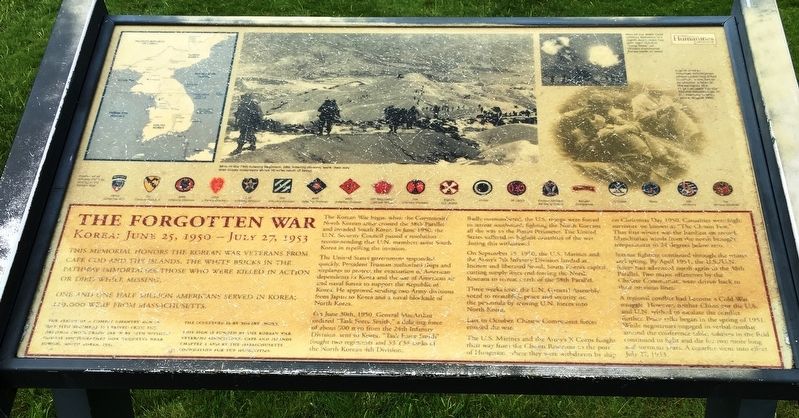 This memorial honors the Korean War veterans from Cape Cod and the Islands. The white bricks in the pathway immortalize those who were killed in action or died while missing.
One and one half million Americans served in Korea; 129,000 were from Massachusetts.

The statue of a combat infantry man of the 35th Regiment is derived from the original photograph taken by 35th Division combat photographer Don Duquette near Suwon, North Korea, 1951.
The sculpture is by Robert Shure.

This sign is funded by the Korean War Veterans Association Cape and Islands Chapter 1 and by the Massachusetts Foundation for the Humanities.

The United States government responded quickly. President Truman authorized ships and airplanes to protect the evacuation of American dependants in Korea and the use of American air and naval to support the Republic of Korea. He approved 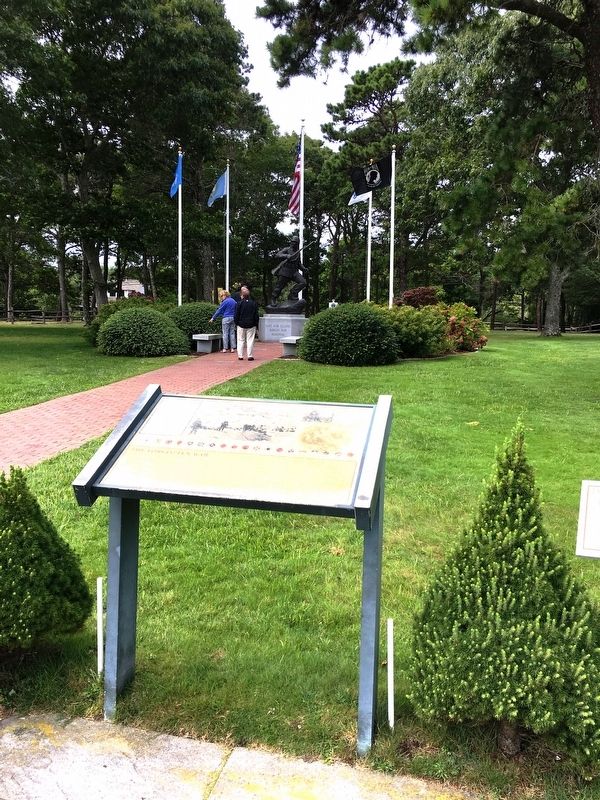 Erected 2000 by The Korean War Veterans Association Cape and Islands Chapter 1 and by the Massachusetts Foundation for the Humanities.

Location. 41° 38.483′ N, 70° 16.72′ W. Marker is in Hyannis, Massachusetts, in Barnstable County. Marker can be reached from Ocean St 0.2 miles north of Gosnold St, on the left when traveling south. Marker located within the Hyannis Veterans Park just south of the John F. Kennedy Memorial. Touch for map. Marker is in this post office area: Hyannis MA 02601, United States of America. Touch for directions. 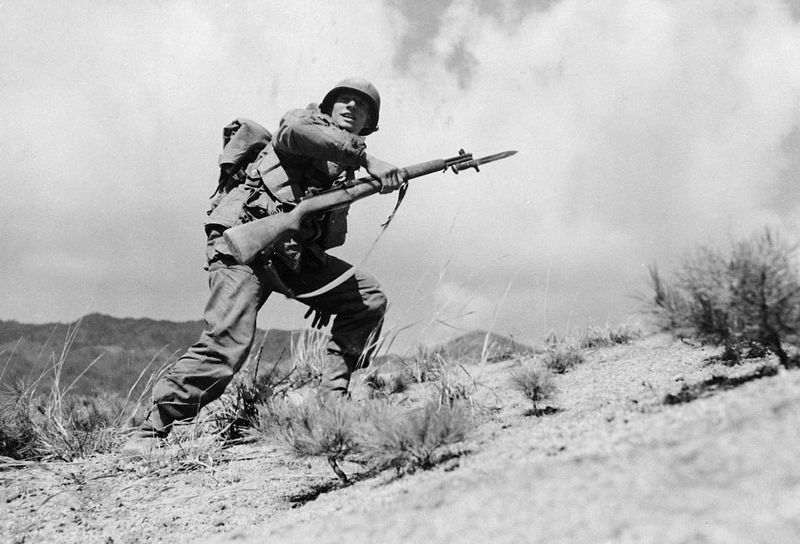 By Cpl. Don Duquette, US Army, March 30, 1951
3. PFC John J. Allen of Company E in the 25th Infantry Division leads his men in attack
This photo is likely that mentioned as the model for the nearby statue. The photo is also known as "The 38th Parallel." 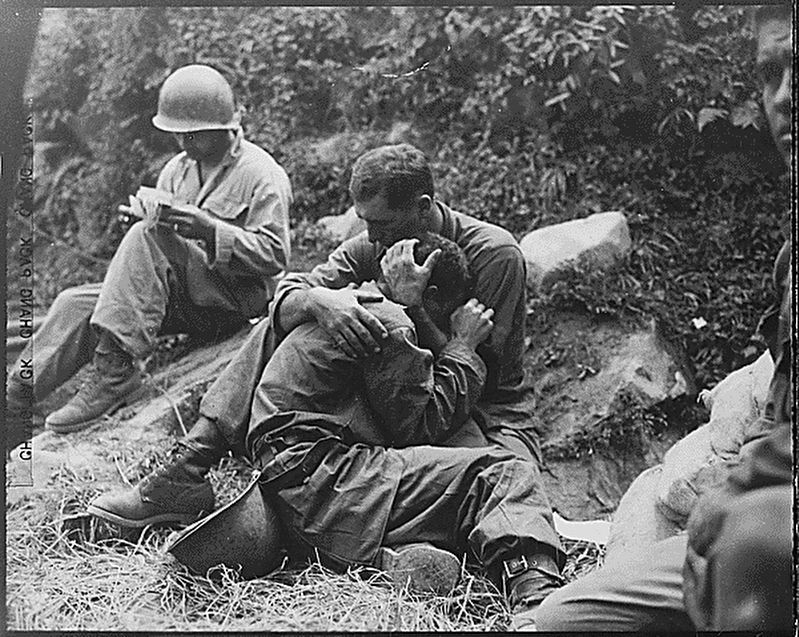 August 28, 1950
4. A grief stricken American infantryman whose buddy has been killed in action is comforted by another
soldier. In the background a corpsman methodically fills out casualty tags, Haktong-ni area, Korea. Photo from the War Department, Army War College, Historical Section. This photo is shown on the right of the marker but reversed. 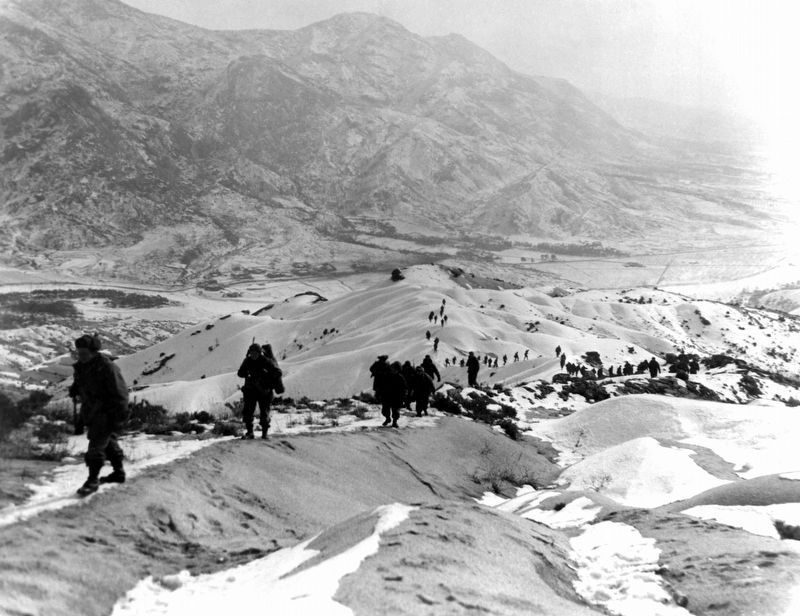 March 1, 1951
5. Men of the 3rd Battalion, 19th Infantry Regiment, U.S. 24th Infantry Division, work their way over
the snowy mountains about 10 miles north of Seoul, Korea, attempting to locate the enemy lines and positions. NARA File#: 111-SC-355544, US Army. This photo is shown along the top center of the marker. 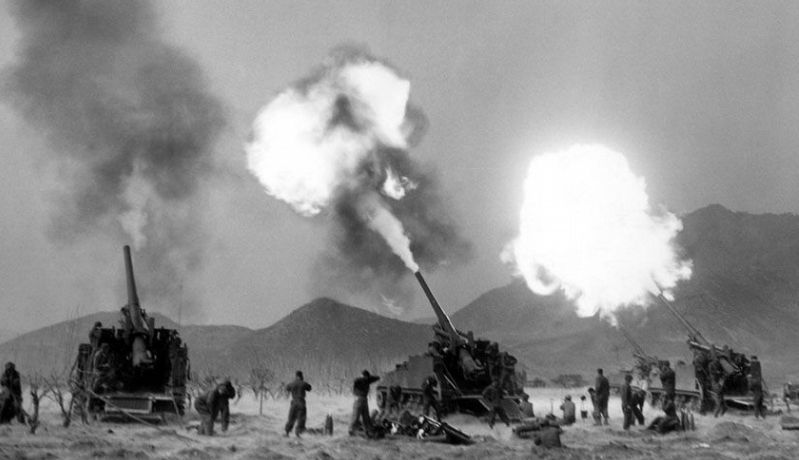 6. Men of the 204th Field Artillery Battalion, U.S. Eighth Army, ... 150 mm "Long Toms" on Chinese
Communist forces north of Seoul. This photo is used on the top right of the marker, although cropped from the original.
More. Search the internet for The Forgotten War.