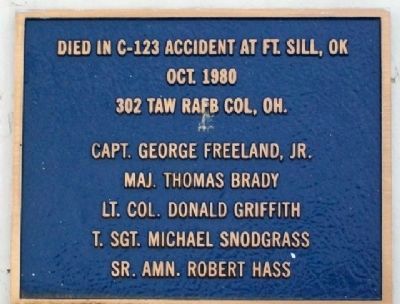 Location. 39° 26.746′ N, 83° 48.576′ W. Marker is in Wilmington, Ohio, in Clinton County. Memorial is near the flagpole in the chain-link fenced enclosure in Denver Williams Memorial Park, about 0.1 miles south of the park entrance off Rombach Avenue (US Route 22). Touch for map. Marker is in this post office area: Wilmington OH 45177, United States of America. Touch for directions. 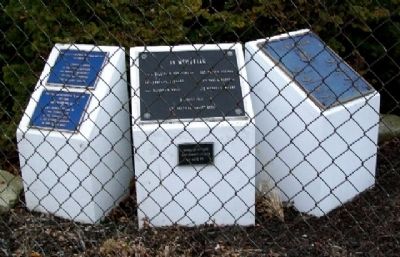 Additional comments.
1. My sincerest gratitude and heartfelt thanks to the contributors who put this together
My father, Major Thomas Brady, was on this aircraft. I did not know that this marker existed and this accident occurred over 36 years ago. To this day I have been trying to gather more information about my father and the crash as well as anything else that would bring closure. I am eternally grateful that someone is taking the time to put this page together. I am including a picture of the aircraft as I found it through 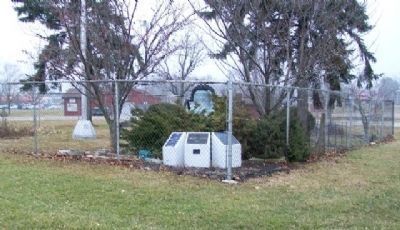 By William Fischer, Jr., January 18, 2010
3. 302 TAW C-123 Accident Memorial
Leftmost of the three markers. Looking NW.
research the same day that I found this website and its picture of the marker. 36 years has gone by since this happened but with the age of the internet I was able to gather all of this information within a few hours. The link to this page was found on Aviation safety Network. My brothers do not yet know of the fortunate find but I will be surprising them with a short trip this coming November to be able to visit this marker. Your website is helping a family bring closure to an unfortunate incident. Again, I thank you for all that you've done. Note To Editor only visible by Contributor and editor
— Submitted October 25, 2016, by Robert P Brady of Clarksville, Tennessee.
2. Info on the aircraft accident
I am looking for Robert P. Brady. I have information about the aircraft accident. I was one of the air traffic controllers on duty at Fort Sill the morning of the accident. I still have pictures of the aircraft before and after the accident. I would like to share some things with you that would help both of us. Note To Editor only visible by Contributor and editor
— Submitted August 21, 2017, by Randall B Burwell of New Brockton, Alabama. 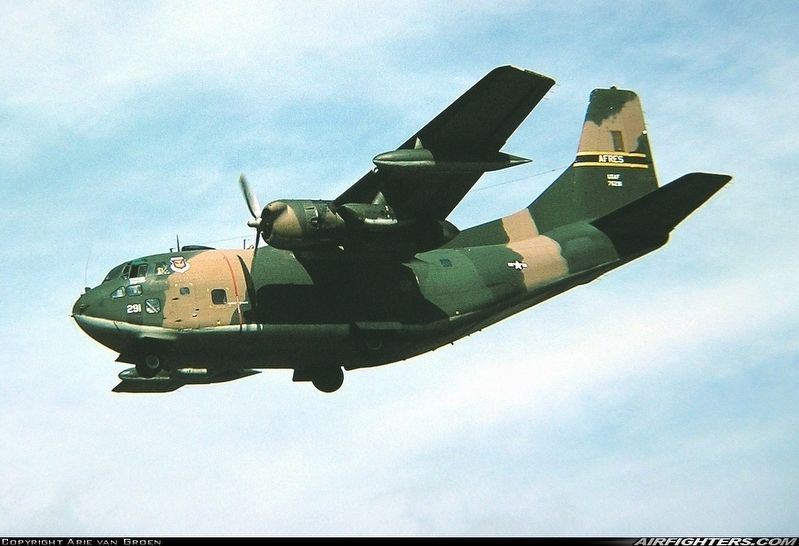 By Arie Van Groen, circa 1978
4. 302 TAW C-123 Aircraft
According to my research, this is the actual plane.
3. First Responder 4/507th Med Co.
I was the pilot of the Medivac aircraft from 4/507th Med Co FT Sill that arrived on the scene shortly after the accident. We transported the crew to Reynolds Army Hospital. I don’t know where he came from but there was an Army Chaplain on the scene when we arrived performing last rights for the crew members as they were removed from the wreckage.
I visited the memorial on Memorial Day several years ago with the Doctor that was our flight surgeon at the time. Note To Editor only visible by Contributor and editor
— Submitted November 17, 2018, by Mark Edward Williams of Norman, Oklahoma.
4. So grateful for the response to my inquiry
Due to the wonderful effort of the creator and manager of this website I must report that I have been in touch with two of the many people that were on scene that fateful day. While my quest is still on going for information, stories, and details lifelong friendships have emerged for my brothers and I with the people who have responded. May you be blessed for the work you have done!
— Submitted December 27, 2018, by Robert P Brady of Clarksville, Tennessee.

5. I was there...
My name is Bobby Joe Brown. I was there at the scene of the accident. Our unit was doing field training exercises, and the plane was supposed to come over to contaminate us, and we were supposed to decontaminate ourselves. When the plane flew over us, I could see a stream of smoke coming out of the tail. A few seconds later, there was a big boom. I jumped in my SPL with a few other platoon members and headed toward the downed plane. We arrived at the site of the crash within a few minutes (before the medics). We were the first on the scene (period). It is a day I will never forget. Out of respect for the family and anyone else reading this entry, I will not go into further detail here. However, if anyone would like to reach out to me to hear my story, simply email me. My sincere condolences to all family members who lost their loved one that day. Please know that even though I never knew their names until I found this site today, I will never forget them. —Bobby Joe Brown.
We have Mr. Brown’s email address on file. —Ed. Note To Editor only visible by Contributor and editor
— Submitted February 9, 2019, by Bobby Joe Brown of Richmond, California.