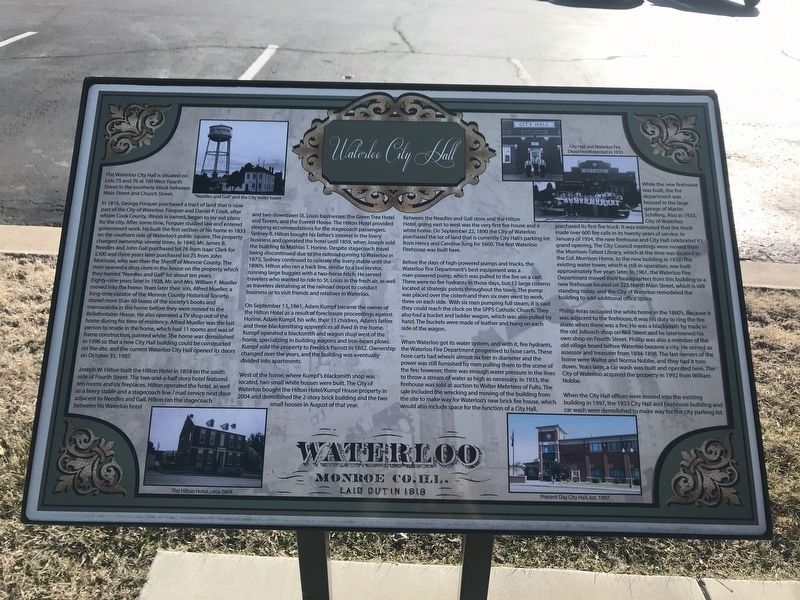 The Waterloo City Hall is situated on Lots 75 and 76 at 100 West Fourth Street in the southerly block between Main Street and Church Street.

In 1816, George Forquer purchased a tract of land that is now part of the City of Waterloo. Forquer and Daniel P. Cook, after whom Cook County, Illinois is named, began to lay out plans for the city. After some time, Forquer studied law and entered government work. He built the first section of his home in 1833 on the southern side of Waterloo’s public square. The property changed ownership several times. In 1840, Mr. James B. Needles and John Gall purchased lot 76 from Isaac Clark for $300 and three years later purchased lot 75 from John Morrison, who was then the Sheriff of Monroe County. The men opened a drug store in the house on the property which they named “Needles and Gall” for about ten years. Eighty-nine years later in 1928, Mr. and Mrs. William F. Mueller moved into the home. Years later their son, Alfred Mueller, a long-time curator of the Monroe County Historical Society, stored more than 60 boxes of the society’s books and memorabilia in the home before they were moved 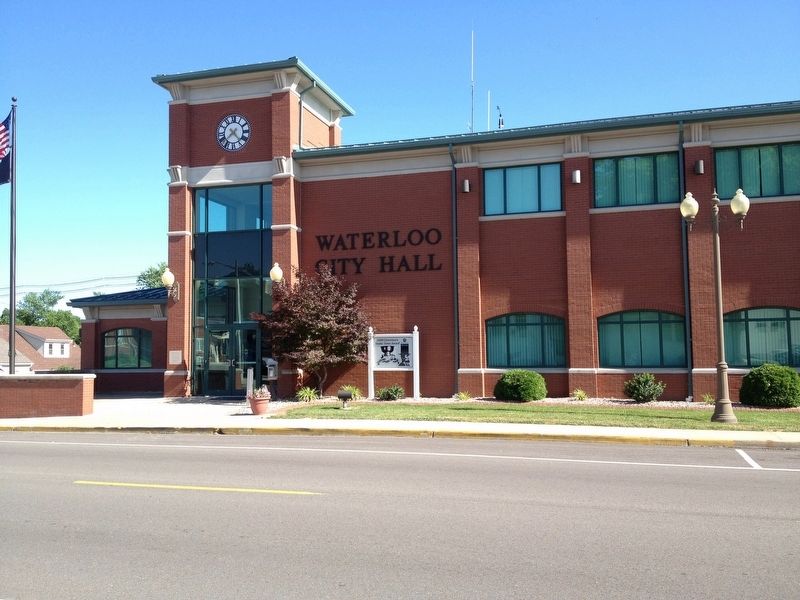 By Sarah Deutch, May 30, 2012
2. Waterloo City Hall Marker
to the Bellefontaine House. He also operated a TV shop out of the home during his time of residency. Alfred Mueller was the last person to reside in the home, which had 11 rooms and was of frame construction, painted white. The home was demolished in 1996 so that a new City Hall building could be constructed on the site, and the current Waterloo City Hall opened its doors on October 31, 1997.

Joseph W. Hilton built the Hilton Hotel in 1854 on the south side of Fourth Street. The two-and-a-half story hotel featured ten rooms and six fireplaces. Hilton operated the hotel, as well as a livery stable and a stagecoach line / mail service next door adjacent to Needles and Gall. Hilton ran the stagecoach between his Waterloo hotel and two downtown St. Louis businesses: the Green Tree Hotel and Tavern, and the Everett House. The Hilton Hotel provided sleeping accommodations for the stagecoach passengers. Sydney B. Hilton bought his father’s interest in the livery business and operated the hotel until 1859, when Joseph sold the building to Mathias T. Horine. Despite stagecoach travel being discontinued due to the railroad coming to Waterloo in 1873, Sydney continued to operate the livery stable until the 1890’s. Hilton also ran a hack line, similar to a taxi service, running large buggies with a two-horse hitch. He served travelers who wanted to ride to St. Louis in the fresh 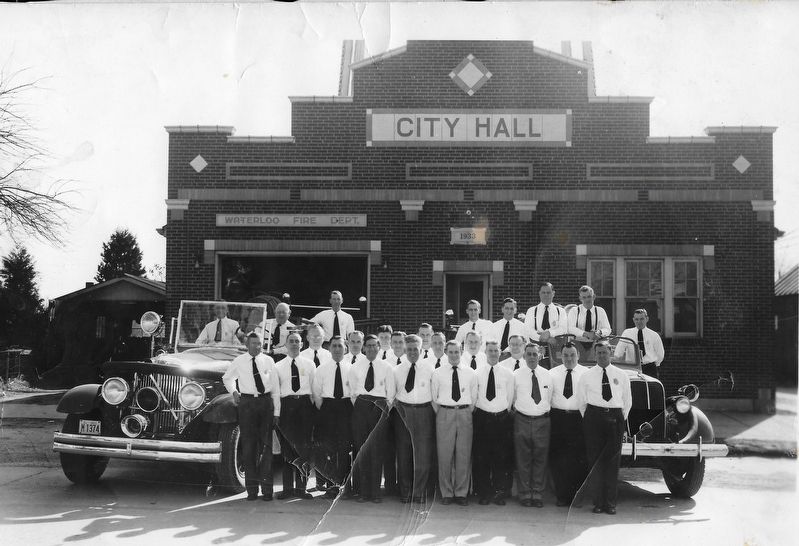 By Sarah Deutch
3. Waterloo City Hall
The prior City Hall that is where the current City Hall's parking lot now lies.
air, as well as travelers detraining at the railroad depot to conduct business or to visit friends and relatives in Waterloo.

On September 13, 1861, Adam Kumpf became the owner of the Hilton Hotel as a result of foreclosure proceedings against Horine. Adam Kumpf, his wife, their 11 children, Adam’s father and three blacksmithing apprentices all lived in the home. Kumpf operated a blacksmith and wagon shop west of the home, specializing in building wagons and iron-beam plows. Kumpf sold the property to Fredrick Parrott in 1882. Ownership changed over the years, and the building was eventually divided into apartments.

West of the home, where Kumpf’s blacksmith shop was located, two small white houses were built. The City of Waterloo bought the Hilton Hotel/Kumpf House property in 2004 and demolished the 2-story brick building and the two small houses in August of that year.

Between the Needles and Gall store and the Hilton Hotel, going east to west was the very first fire house and a white home. On September 22, 1890 the City of Waterloo purchased the lot of land that is currently City Hall’s parking lot from Henry and Caroline Jung for $600. The first Waterloo Firehouse was built here.

Before the days of high-powered pumps and trucks, the Waterloo Fire Department’s best equipment was a man-powered pump, which was pulled to the fire on a cart. There were no fire hydrants in those days, but 12 large cisterns located at strategic points throughout the town. The pump was placed over the cistern and then six men went to work, three on each side. With six men pumping full steam, it is said they could reach the clock on the SPPS Catholic Church. They also had a bucket and ladder wagon, which was also pulled by hand. The buckets were made of leather and hung on each side of the wagon.

When Waterloo got its water system, and with it, fire hydrants, the Waterloo Fire Department progressed to hose carts. These hose carts had wheels almost six feet in diameter and the power was still furnished by men pulling them to the scene of the fire; however, there was enough water pressure in the lines to throw a stream of water as high as necessary. In 1933, the firehouse was sold at auction to Walter Mehrtens of Fults. The sale included the wrecking and moving of the building from the site to make way for Waterloo’s new brick fire house, which would also include space for the function of a City Hall.

While the new firehouse was built, the fire department was housed in the large garage of Martin Schilling. Also in 1933, City of Waterloo purchased its first fire truck. It was estimated that the truck made over 600 fire calls in its twenty years of service. In January of 1934, the new firehouse and City Hall celebrated it’s grand opening. The City Council meetings were moved from the Morrison-Talbot Library, which at the time was located in the Col. Morrison Home, to the new building in 1937. The existing water tower, which is still in operation, was built approximately five years later. In 1961, the Waterloo Fire Department moved their headquarters from this building to a new firehouse located on 223 North Main Street, which is still standing today, and the City of Waterloo remodeled the building to add additional office space.

Phillip Arras occupied the white home in the 1860’s. Because it was adjacent to the firehouse, it was his duty to ring the fire alarm when there was a fire. He was a blacksmith by trade in the old Jobusch shop on Mill Street and he later owned his own shop on Fourth Street. Phillip was also a member of the old village board before Waterloo became a city. He served as assessor and treasurer from 1894-1898. The last owners of the home were Walter and Norma Nobbe, and they had it torn down. Years later, a car wash was built and operated here. The City of Waterloo acquired the property in 1992 from William Nobbe.

When the City Hall offices were moved into the existing building in 1997, the 1933 City Hall and Firehouse building and car wash were demolished to make way for the city parking lot.