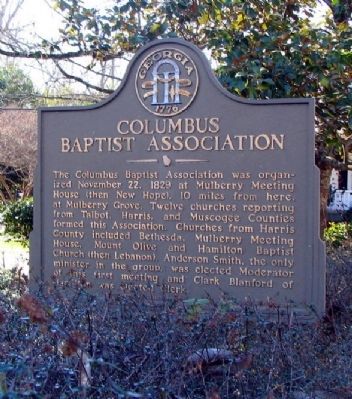 The Columbus Baptist Association was organized November 22, 1829 at Mulberry Meeting House (then New Hope), 10 miles from here, at Mulberry Grove. Twelve churches reporting from Talbot, Harris, and Muscogee Counties formed this Association. Churches from Harris County included Bethesda, Mulberry Meeting House, Mount Olive and Hamilton Baptist Church (then Lebanon). Anderson Smith, the only minister in the group, was elected Moderator of this first meeting and Clark Blanford of Hamilton was elected Clerk.

Topics and series. This historical marker is listed in this topic list: Churches & Religion. In addition, it is included in the Georgia Historical Society series list. A significant historical date for this entry is November 22, 1778.