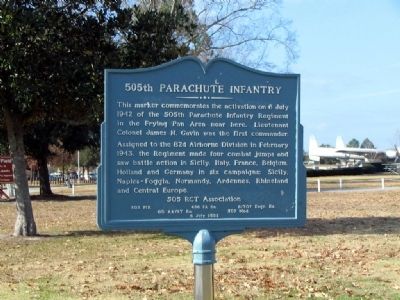 This marker commemorates the activation on 6 July 1942 of the 505th Parachute Infantry Regiment in the Frying Pan area near here. Lieutenant Colonel James M. Gavin was the first commander.

Topics. This historical marker is listed in this topic list: War, World II. A significant historical month for this entry is February 1943.

Location. 32° 21.251′ N, 84° 58.167′ W. Marker is in Fort Benning, Georgia, in Chattahoochee County. Marker is at the intersection of Burr Street and Chesney Street, on the right when traveling west on Burr Street. The marker is on Fort Benning Military Reservation, near Columbus Georgia. It is located near the U.S. Army Airborne School parade ground, near several exhibits (including World War II and Korean War era aircraft). Touch for map. Marker is in this post office area: Fort Benning GA 31995, United States of America. Touch for directions.