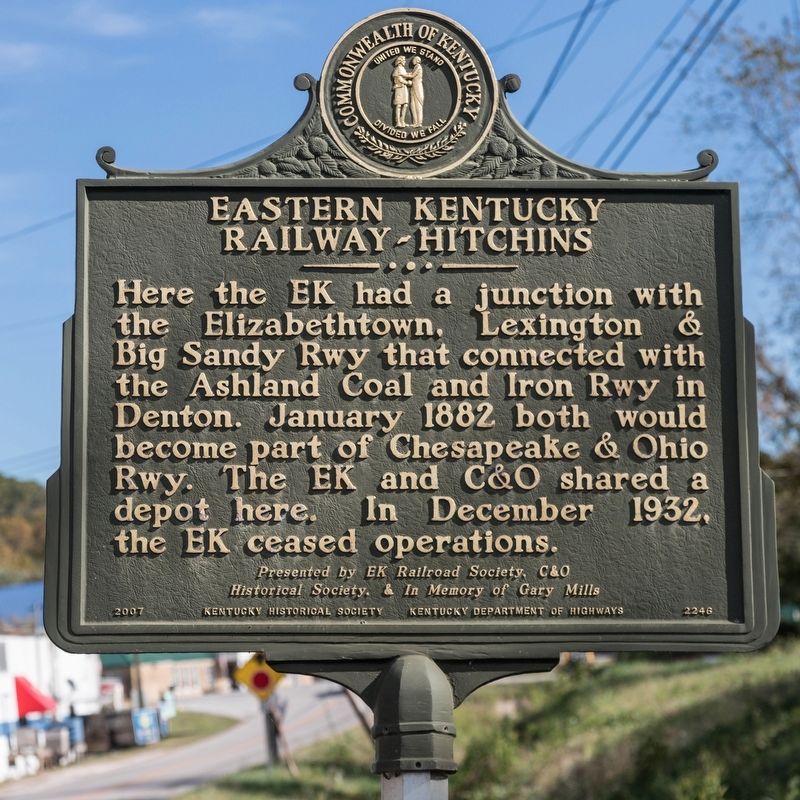 Photographed By J. J. Prats, October 18, 2019
1. Eastern Kentucky Railway Marker
Inscription.
Eastern Kentucky Railway. Hitchins. Here the EK had a junction with the Elizabethtown, Lexington and Big Sandy Railway that connected with the Ashland Coal and Iron Railway in Denton. January 1882 both would become part of Chesapeake and Ohio Railway. The EK and C&O shared a depot here. In December 1932, the EK ceased operations. . This historical marker was erected in 2007 by Kentucky Historical Society and Kentucky Department of Highways. Presented by EK Railroad Society, C&O Historical Society and in memory of Gary Mills. It is in Hitchins in Carter County Kentucky

Here the EK had a junction with the Elizabethtown, Lexington & Big Sandy Railway that connected with the Ashland Coal and Iron Railway in Denton. January 1882 both would become part of Chesapeake & Ohio Railway. The EK and C&O shared a depot here. In December 1932, the EK ceased operations.

Topics and series. This historical marker is listed in this topic list: Railroads & Streetcars. In addition, it is included in the Kentucky Historical Society series list. A significant historical month for this entry is January 1882.

Other nearby markers. At least 8 other markers are within 6 miles of this marker, measured as the crow flies. Mount Savage Furnace (approx. 3.3 miles away); A Masterful Retreat 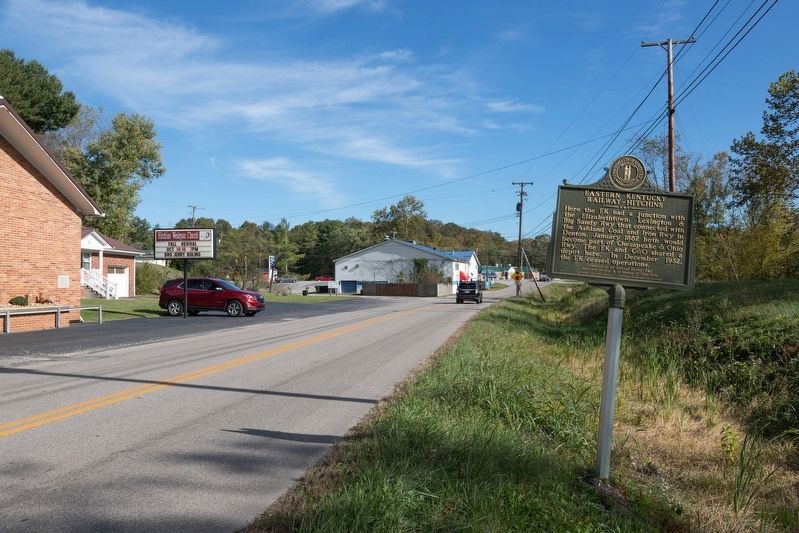 Related markers. Click here for a list of markers that are related to this marker. It is all of the Eastern Kentucky Railway Historical Markers

Also see . . .  East Kentucky Southern Railway. While the Eastern Kentucky Railway proper ceased operations in 1926, this portion of the line, between Grayson and Webbville, continued under a new name. Excerpt:

In 1928 the United States was on a collision course with the Great Depression and it was in that same year that the citizens of Grayson, Vincent, Hitchins, Reedville, Butler, Willard, Bellstrace, and Webbville purchased the Grayson-Webbville segment from the owners of the Eastern Kentucky Railway. The name of their new company was the “East Kentucky Southern Railway Company.” ...

The tracks had not been maintained for a decade or so between Grayson and Webbville. It was much too dangerous to run a heavy locomotive. To answer this problem, the men of the Grayson shops came up with a solution, a gasoline powered car fitted for track use. ...

The new company made a determined effort to win the approval of the public and to make a profit. A new automobile powered vehicle, No. 215, popularly called “Queen” was introduced to the segment. Queen looked very much like a school bus on tracks.