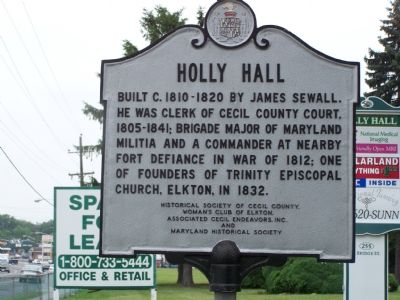 By William Pfingsten, June 29, 2006
1. Holly Hall Marker
Inscription.
Holly Hall. . Built c. 1810–1820 by James Sewall. He was Clerk of Cecil County Court 1805–1841; Brigade Major of Maryland Militia and a Commander at nearby Fort Defiance in War of 18 12; one of founders of Trinity Episcopal Church, Elkton in 1832. . This historical marker was erected by Historical Society of Cecil County, Woman’s Club of Elkton, Associated Cecil Endeavors, Inc & Maryland Historical Society. It is in Elkton in Cecil County Maryland

Topics. This historical marker is listed in these topic lists: Churches & Religion • Forts and Castles • Settlements & Settlers • War of 1812. A significant historical year for this entry is 1820. 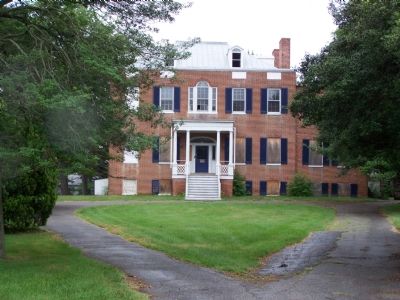 Additional commentary.
1. The remodeled version of the Mansion in 2006
In 2006, after Cornerstone Christian Academy had closed it's doors to the public, six men and women went into Holly Hall Mansion for the first time, ready to work, ready to make this wonderful building a school. We were ready to make it a place of learning. It was a little crazy being in a place so old and with so much history. We went in there and all the walls were crusted in smoke and ashes. The story went that a homeless man got into the building and lit a sterno canister and it got out of control. The outer shell of the inside of the building went up in smoke. Fire damage was done to two rooms, one a make-shift kitchen and another, the room next to the little chapel inside. However, the whole building inside was covered in soot and ash.

The inside walls were plaster on the outside and on the inside were solid brick walls, just like you see on the outside. We went straight to work that summer, painting, sanding, and even putting a new porch on the back of the building. It was in really bad need of repair. We worked from 8:30 or 9 in the morning until 6 pm everyday except Sunday.

The reason I recognized this photo was because of the shutters. They were a forest green before we painted them the color they are today, Royal Blue. We thought that the blue color would bring some dignity to an already beautiful building and it would offset the Holly beautifully.

Needless to say we didn't get it quite finished. The Cordish Company were the owners and we either had to make it official that it was a school or turn the keys back in to them. It was a tough decision because all of us wanted this to work. I am sad to say that the Holly Hall mansion looks wonderful inside but the little dream we had for a school there had died.

Everyone moved on and I moved out of state. I still think of my time there and how much it meant to me. It was a great place with a lot of hidden character that few people probably realize. On the inside of the building there is a glass entrance way. On that entrance way there are etched the names of some of the nurses who treated the dead after the plane crash of 1965 on Delancy Road. It was a cool moment when we found those. I am sure there are many stories associated with this building. Someone even noted that George Washington himself stood outside by the Holly Trees one summer. I would love to know alot more.

I do know that the Sewall family grave stone that was made of granite is at the foot of the stairs on the front step. Their bodies were buried in Baltimore. Alot of history for a wonderful building.