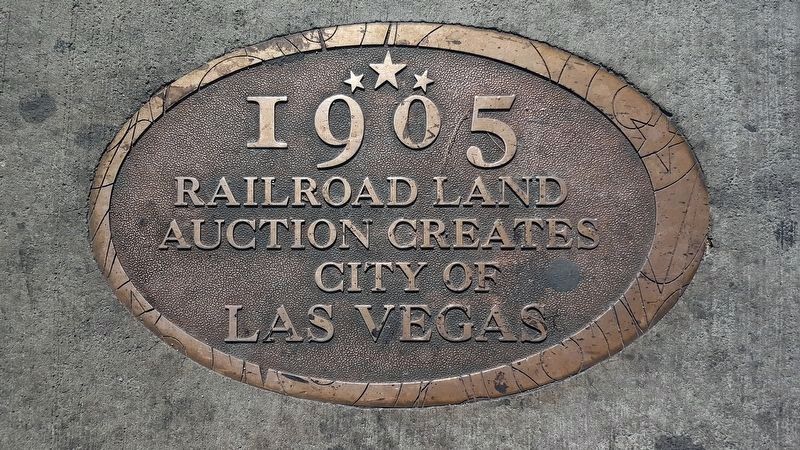 Topics. This historical marker is listed in these topic lists: Railroads & Streetcars • Settlements & Settlers. A significant historical year for this entry is 1905.

More about this marker. Marker is embedded in the sidewalk.

Regarding Birth of Downtown Las Vegas. onlinenevada.org contains an 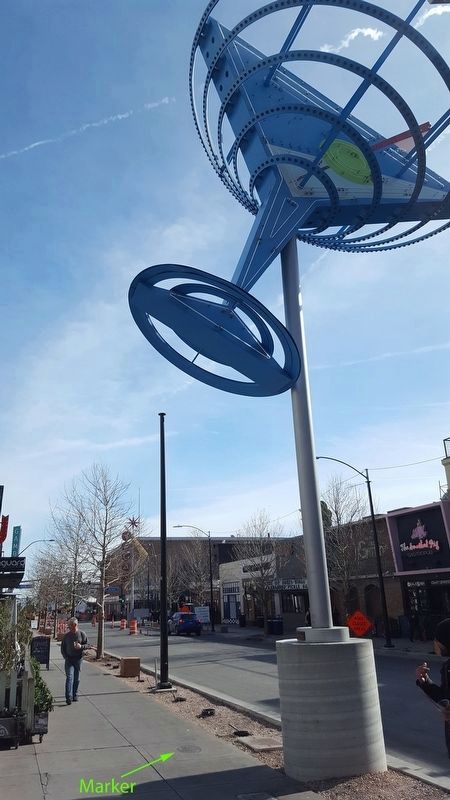 Click or scan to see
this page online
article highlighting the history of this notable event. It reads:

The birth of downtown Las Vegas took place during a land auction on Monday, May 15, 1905, when 1,200 lots in an area called Clark's Las Vegas Townsite were offered for sale. The townsite was named after U.S. Senator William Clark of Montana, who had purchased the 1,800-acre Stewart Ranch from area pioneer rancher Helen J. Stewart in 1902. Clark intended to make Las Vegas a stop for a rail line he was building, the San Pedro, Los Angeles & Salt Lake City Railroad, which was completed in January 1905.

About 150 buildings were either finished or being built beside the railroad in the evolving Las Vegas townsite in the weeks before the 1905 auction. Maps of the undeveloped, five-by-six-block townsite had been posted in Salt Lake City and Los Angeles.

Hundreds of investors arrived at the townsite on Clark's railroad, which owned the land, drew the boundaries for the lots, and assigned its local subsidiary, the Las Vegas Land & Water Company, to hold the auction. The railroad offered special round-trip rates from Salt Lake and Los Angeles for the occasion.

On the day of auction, as outside temperatures reached 110 degrees, more than 1,000 people crowded around a wooden platform covered by a canvas tent, just east of the new railroad depot (beside the present-day Plaza Hotel). At 10 a.m., 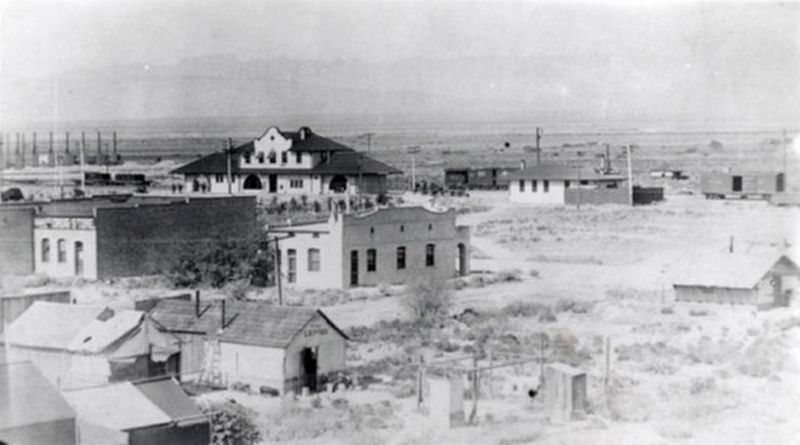 3. Site of Clark's Las Vegas Townsite
Photograph courtesy of UNLV Special Collections.
Photo includes Union Pacific Railroad depot, Las Vegas Drug Store, laundry business and other buildings. The view is south-western with the intersection of Ogden Street and Main Street visible in the right center of the photograph. Approximate date 1909.
C.O. Whittemore, president of the land and water company, introduced auctioneer Ben E. Rhoades, who, gavel in hand, called for bids. Prices ranged from $100 to $500 for residential and inside lots to a high of $750 for corner lots. To increase interest in sales, the railroad guaranteed buyers access to the new rail yard.

Lots along Fremont Street were considered the best locations for businesses. They sold first at unexpectedly high prices, including three that went for $1,750 at the southeast corner of Fremont and Main (currently the site of the Las Vegas Club). Other lots on Fremont between Main and First sold for $750 to $850.

After a lunch break, bidding continued until 3 p.m. By then, 176 lots had been sold, some for as high as $1,200 above the starting bid price, for a total of $79,566. Some winning bidders wasted little time, beginning construction that very evening. A few merchants, intent on opening saloons and other businesses by morning, literally dragged wood and tents from their lots at the nearby McWilliams Townsite.

Sales of other Clark townsite lots resumed at 8 a.m. on May 16. Although only about half of the lots were sold, the two-day auction brought in about $265,000. While many successful bidders remained in town, others boarded the train and left.

Under rules specified in the land deeds, the railroad prohibited liquor sales 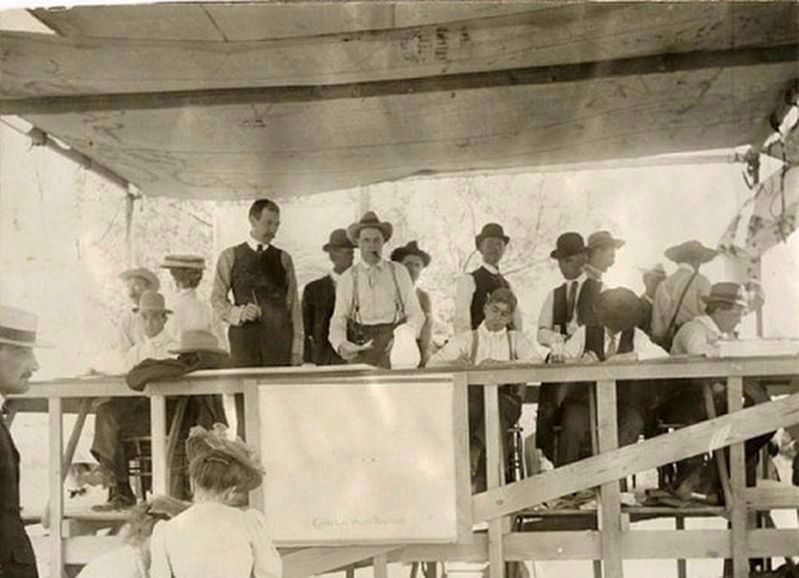 4. Clark's Las Vegas Townsite Auction, May 15, 1905
Photograph courtesy of UNLV Special Collections.
An auction held May 15-16, 1905 to sell lots within Clark's Las Vegas Townsite. A group of men and women stand on and around a covered wooden platform outdoors. The auctioneer stands to the left of center at the front of the platform. The decision to auction lots within Clark's Las Vegas Townsite was not made until May 10, 1905. Auctioneer C.O. Whittemore was the president of the Las Vegas Land and Water Company.
on all of the townsite's blocks, except for Blocks 16 and 17. The town's saloons were built in Block 16, bordered by First, Second, Ogden, and Stewart. The front of First Street quickly became the "red light district," which included legal brothels.
Credits. This page was last revised on March 7, 2020. It was originally submitted on February 16, 2020, by Douglass Halvorsen of Klamath Falls, Oregon. This page has been viewed 70 times since then and 12 times this year. Photos:   1, 2, 3, 4. submitted on February 16, 2020, by Douglass Halvorsen of Klamath Falls, Oregon. • J. Makali Bruton was the editor who published this page.
Share This Page.