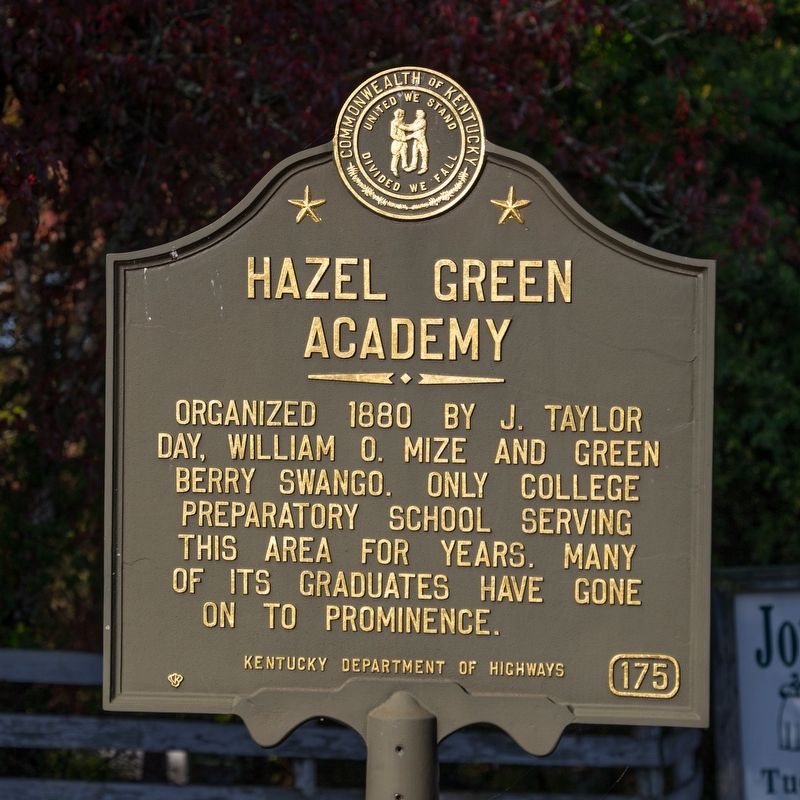 Photographed By J. J. Prats, October 21, 2019
1. Hazel Green Academy Marker
Inscription.
Hazel Green Academy. . Organized 1880 by J. Taylor Day, William O. Mize and Green Berry Swango. Only college preparatory school serving this area for years. Many of its graduates have gone on to prominence. . This historical marker was erected by Kentucky Department of Highways. It is in Hazel Green in Wolfe County Kentucky

Organized 1880 by J. Taylor Day, William O. Mize and Green Berry Swango. Only college preparatory school serving this area for years. Many of its graduates have gone on to prominence.

Topics and series. This historical marker is listed in this topic list: Education. In addition, it is included in the Kentucky Historical Society series list. A significant historical year for this entry is 1880. 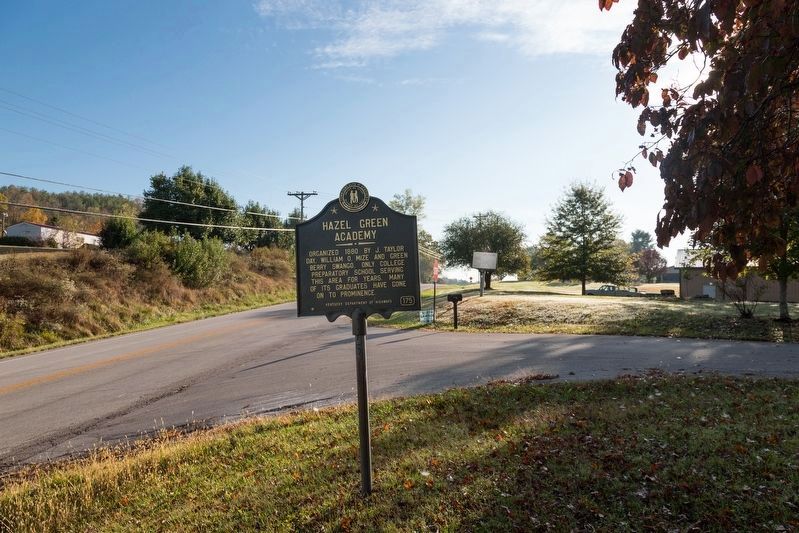 Photographed By J. J. Prats, October 21, 2019
2. Hazel Green Academy Marker
Academy Road, one of the entrances to the former Hazel Green Academy, runs to the right. The white back of the USA Gens. Morgan CSA marker is in the distance.

Regarding Hazel Green Academy. The school closed in 1983.

The community of Hazel Green, named for the abundance of hazelnut trees found in the area, was founded about 1850, and is located in the rugged, Big Sandy country of Wolfe County, Kentucky. The town was settled mostly by Virginians, beginning as a trading post supplied with goods carried on horseback from Maysville, Lexington, and other towns, in trade for furs, peltries, and farm products. The town rapidly grew in size and importance soon becoming well known for the Hazel Green Fair and a racecourse, which was the first in the mountains. After the turn of the century, Swango Springs also became a popular vacation spa. These attractions enabled early families to set the 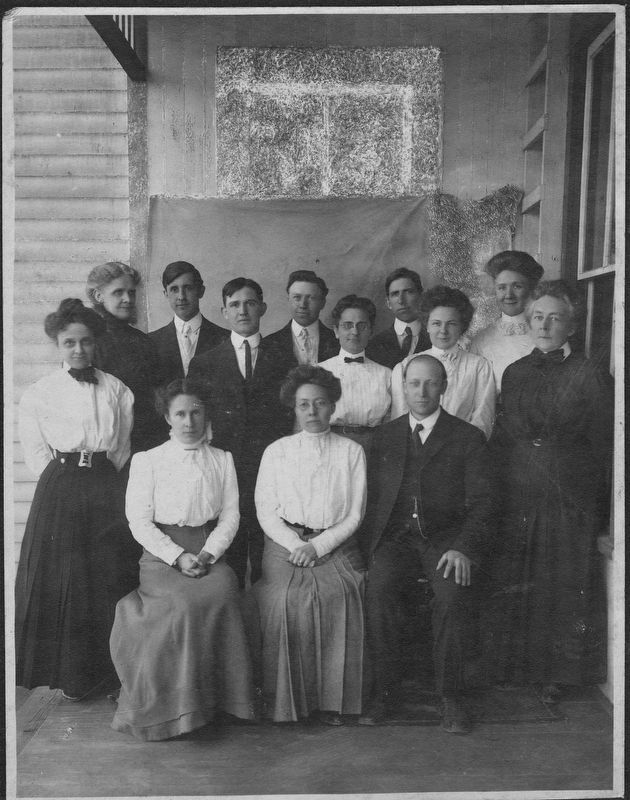 The Founders, J. Taylor Day, Greenberry Swango, and W.O. Mize are responsible for establishing the original Hazel Green Academy through an initial contribution of $500 each in 1880. By 1888, the school was transferred to administration by the Christian Women's Board of Missions. Enrollment in the school during this time grew from thirteen to eighty-seven students, and then steadily thereafter. The educational institution is noted for being one of the first junior colleges in the mountains and of which many of Eastern Kentucky's most noted citizens attended. At one time, The Hazel Green Academy had the distinction of having the highest percentage of graduates who enter college, and the lowest withdrawal rate, of any other accredited school in Kentucky. Because of the limited resources of Eastern Kentucky, which comprises 38 counties, Hazel Green Academy was a vital part of a rural development program serving the local population. The school limited enrollment to Eastern Kentucky children with not more than 10% of outside attendance allowed. Because of the Academy's influence, eventually twenty-nine mission-supported schools emerged to serve the area. However, by the 60's, the eventual shift in population away from 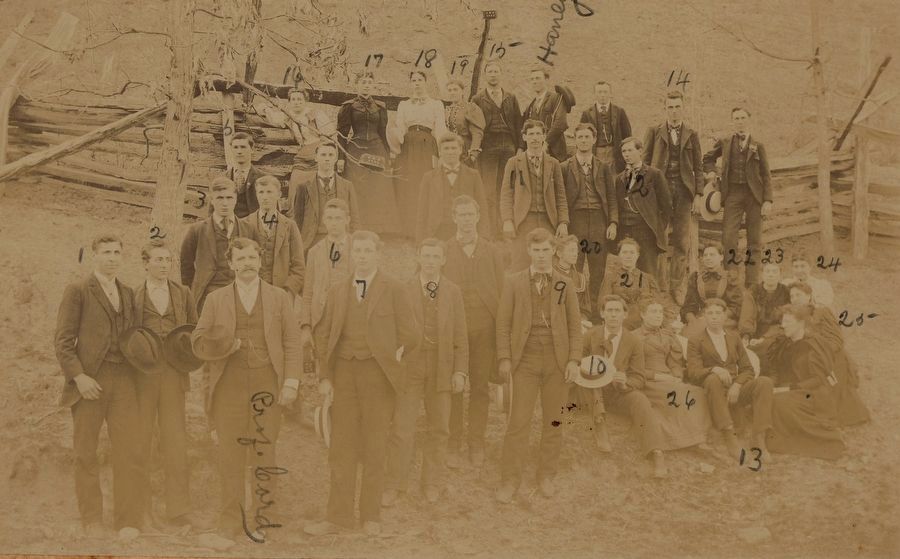 2. Entry in AbandonedOnline.com. This article has numerous photographs of the abandoned campus. Excerpt:

The school struggled throughout the mid-20th century as enrollment dropped. Public schools were able to offer a comparable education at far less cost while providing higher salaries to teachers. Grades seven and eight were dropped in 1965, along with all farming operations.

The Division of Home Ministries, the branch of the Christian Church that was then overseeing the Academy, began turning over administrative and financial responsibility to local officials. Hazel Green Academy became an independent institution affiliated with the Christian Church in 1971. The school started a major push to strengthen its fundraising and recruitment efforts to lower teacher turnover and to boost enrollment.

It was only a temporary solution to a long-term decline of the school. On June 30, 1983, owing to an increasing fiscal deficit, the Board of Directors voted not to reopen that fall. 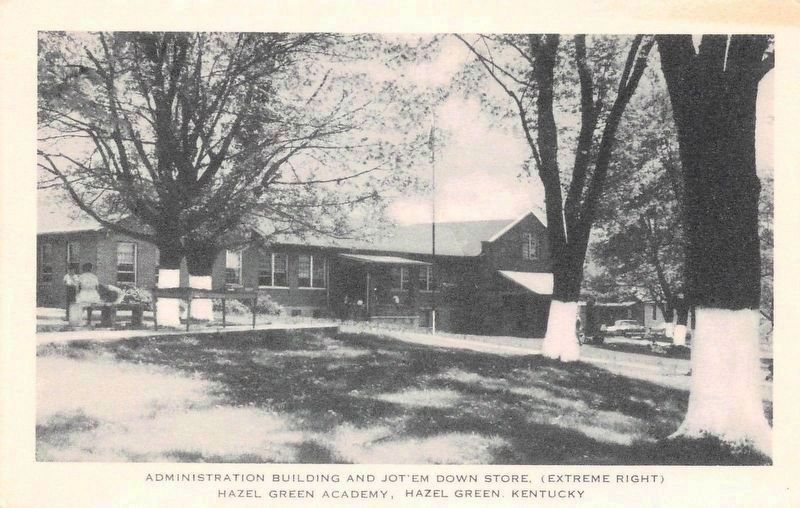 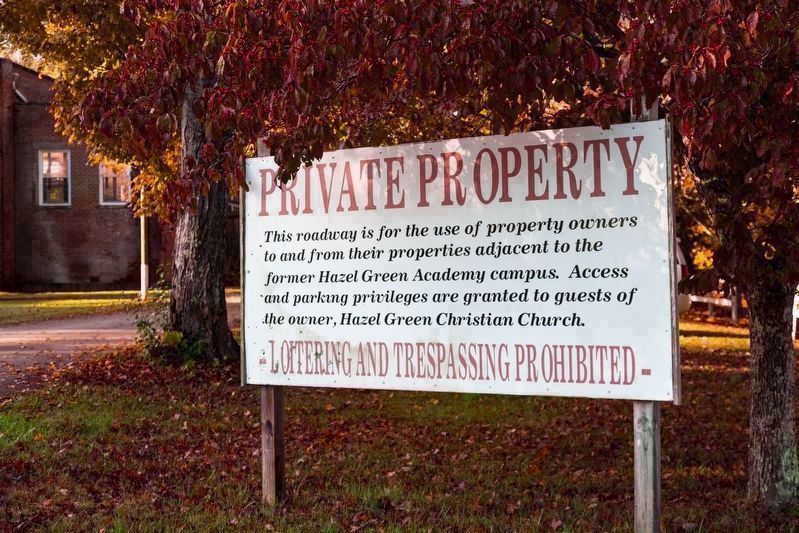 Photographed By J. J. Prats, October 21, 2019
6. Your Visit is Not Welcome
All roads and footpaths entering the former Hazel Green Academy campus are posted. It appears that historical tourists are not welcome by the church that now owns the campus. The signs reads:

PRIVATE PROPERTY
This roadway is for the use of property owners to and from their properties adjacent to the former Hazel Green Academy campus. Access and parking privileges are granted to guests of the owner, Hazel Green Christian Church.
LOITERING AND TRESPASSING PROHIBITED