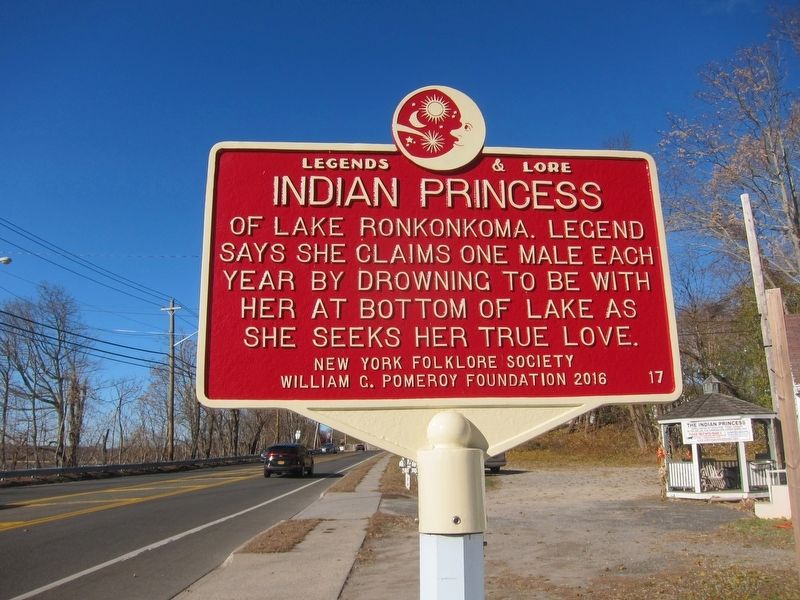 By Andrew Ruppenstein, November 22, 2018
1. Indian Princess Marker
Inscription.
Indian Princess. Legends & Lore. of Lake Ronkonkoma. Legend says she claims one male each year by drowning to be with her at bottom of lake as she seeks her true love. . This historical marker was erected in 2016 by Lake Ronkonkoma Heritage Association, marker thru a Grant from W. Pomeroy Foundation. It is in Lake Ronkonkoma in Suffolk County New York

of Lake Ronkonkoma. Legend says she claims one male each year by drowning to be with her at bottom of lake as she seeks her true love.

Other nearby markers. At least 8 other markers are within 5 miles of this marker, measured as the crow flies. The Lake of Haunting Mystery (about 400 feet away, measured in a direct line); Episcopal Church (approx. 0.2 miles away); World War II Memorial Tree (approx. half a mile away); Arrowheads (approx. 0.7 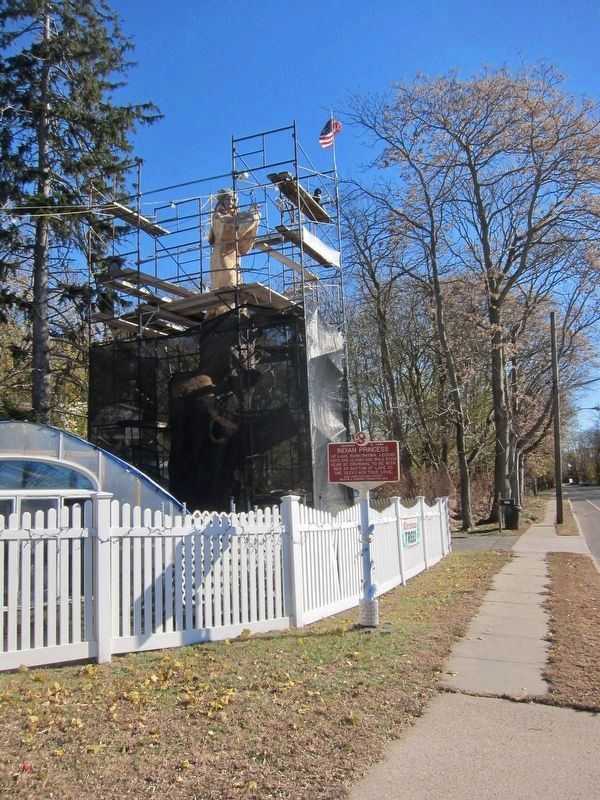 By Andrew Ruppenstein, November 22, 2018
2. Indian Princess Marker with in-progress carving of the Indian Princess
A statue carved from 200-year old European Red Copper Beech is being created by sculptor Todd Arnett.
miles away); 1884 Church Site (approx. 0.8 miles away); L.I. Motor Parkway (approx. 1½ miles away); Roseneath Cottage (approx. 3.9 miles away); Richard Smith (approx. 4.1 miles away). Touch for a list and map of all markers in Lake Ronkonkoma.

Also see . . .
1. Princess Ronkonkoma (Lake Ronkonkoma Historical Society). (Scroll roughly 2/3 of the way down the page to find an extensive section on lore regarding the lake)

Perhaps the most popular legend of Lake Ronkonkoma involves the tale of the Indian Princess whose unrequited love has dominated the myths of the lake since the 1600s. Specific details of the legend vary, but all versions have served as a facilitator of a handful of additional stories regarding the lake, including its fabled bottomless depths and mysterious healing powers....

While locals will confirm that drowning incidents are frequent at the lake, it is difficult to conclude whether or not deaths occur annually as the legend portends. Still, certain locals and historians will claim that almost every year for 200 years someone has drowned in Lake Ronkonkoma . . . almost always a male. Additionally, various County Police officials insist that at least one person drowns in Lake Ronkonkoma

each year. The most disturbing certainty is that police and locals alike can only recall a handful of women having drowned in the lake." (Submitted on November 29, 2018.)