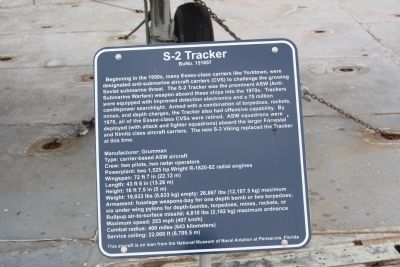 Beginning in the 1950s, many Essex-class carriers like Yorktown,were designated anti-submarine aircraft carriers (CVS) to challenge the growing Soviet submarine threat. The S-2 Tracker was the prominent ASW (Anti-Submarine Warfare) weapon aboard these ships into the 1970s. Trackers were equipped with improved detection electronics and a 70 million candlepower searchlight. Armed with a combination of torpedoes, rockets, mines, and depth charges, the Tracker also had offensive capability. By 1976, all of the Essex-class CVSs were retired. ASW squadrons were deployed (with attack and fighter squadrons) aboard the larger Forrestal and Nimitz class aircraft carriers. The new S-3 Viking replaced the Tracker at this time. 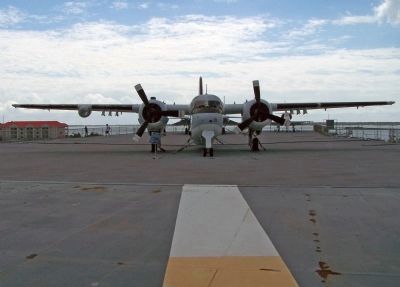 Topics. This memorial is listed in this topic list: Air & Space. A significant historical year for this entry is 1976.

Location. 32° 47.382′ N, 79° 54.507′ W. Marker is in Mount Pleasant, South Carolina, in Charleston County. Memorial can be reached from Patriot Point Road. Aboard the USS Yorktown. Touch for map. Marker is at or near this postal address: 40 Patriots Point Road, Mount Pleasant SC 29464, United States of America. Touch for directions. 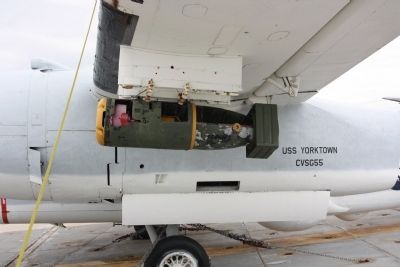