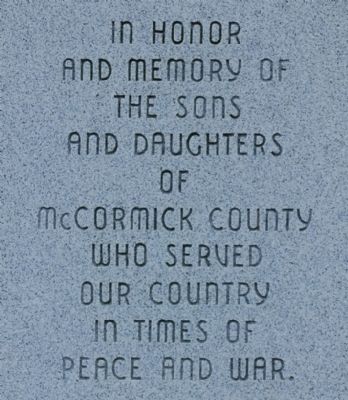 In Honor
and Memory of
the Sons
and Daughters
of
McCormick County
who Served
Our Country
in Times of
Peace and War.

Topics. This historical marker and monument is listed in this topic list: Military. 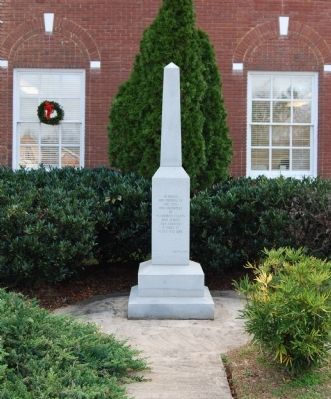 Photographed By Brian Scott, December 23, 2008
2. McCormick County Veterans Monument
The building in the background is the McCormick County Courthouse, listed in the National Register of Historic Places.

Additional commentary.
1. McCormick County Courthouse
The McCormick County Courthouse is a two-story brick building built in 1923 in the Neo-Classical style. On the main (east) facade is a large two-story portico with Doric columns and pilasters. Above the columns is a sheet metal cornice with dentils and modillion blocks. The portico has a flat roof which intersects the main gable roof. The main entrance has double doors with an eight-light transom. Over the entrance is an enriched lintel with console brackets, dentils, and decorative frieze. Windows on the center bays of the first and second floors are tri-part six-over-six with two-over-two 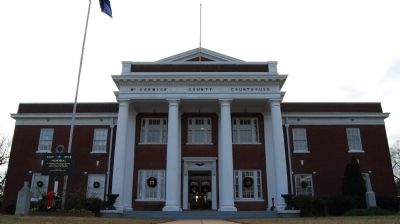 Significance
McCormick County was formed in 1916 from territory taken from Edgefield, Abbeville and Greenwood Counties. Plans were soon made to build a courthouse but the building was not completed until 1923. The architect was G. Lloyd Preacher of Augusta, who designed the building in the Neo-Classical style. The building is a good example of its period, with a large Doric portico on the main facade. The courthouse also has extensive decorative brickwork and an interior pressed metal ceiling. Since its completion the building has been continuously used as government offices for the county. Few alterations have occurred to the building and it retains its original character. (Source: National Register nomination form.)
— Submitted December 19, 2009, by Brian Scott of Anderson, South Carolina.
Credits. This page was last revised on June 16, 2016. It was originally submitted on December 31, 2008, by Brian Scott of Anderson, South Carolina. This page has been viewed 967 times since then and 17 times this year. Photos:   1, 2, 3. submitted on December 31, 2008, by Brian Scott of Anderson, South Carolina.
Share this page.