Georgia Marble Company and the Village of Tate 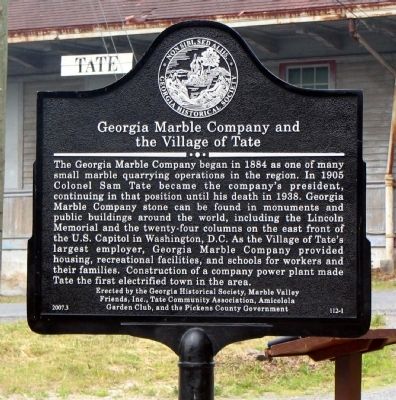 The Georgia Marble Company began in 1884 as one of many small marble quarrying operations in the region. In 1905 Colonel Sam Tate became the company's president, continuing in that position until his death in 1938. Georgia Marble Company stone can be found in monuments and public buildings around the world, including the Lincoln Memorial and the twenty-four columns of the east front of the U.S. Capitol in Washington, D.C. As the Village of Tate's largest employer, Georgia Marble Company provided housing, recreational facilities, and schools for workers and their families. Construction of a company power plant made Tate the first electrified town in the area.

Topics and series. This historical marker is listed in these topic lists: Industry & Commerce • Natural Resources • Political Subdivisions. In addition, it is included in the Georgia Historical Society series list. A significant historical year for this entry is 1884.

Click or scan to see
this page online
34° 24.841′ N, 84° 23.195′ W. Marker is in Tate, Georgia, in Pickens County. Marker is at the intersection of Georgia Route 53 and North Railroad Street, on the left when traveling east on State Route 53. Touch for map. Marker is in this post office area: Tate GA 30177, United States of America. Touch for directions.