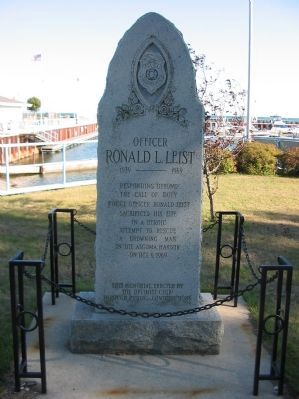 Photographed By Keith L, September 16, 2008
1. Officer Ronald L. Leist Marker
Inscription.
Officer Ronald L. Leist. 1939 — 1969.
Responding beyond the call of duty Police Officer Ronald Leist sacrificed his life in a heroic attempt to rescue a drowning man in the Algoma Harbor on Oct. 9, 1969. . This historical marker was erected by The Optimist Club through public contributions. It is in Algoma in Kewaunee County Wisconsin

Responding beyond
the call of duty
Police Officer Ronald Leist
sacrificed his life
in a heroic
attempt to rescue
a drowning man
in the Algoma Harbor
on Oct. 9, 1969

Erected by The Optimist Club through public contributions.

Topics. This historical marker is listed in this topic list: Heroes. A significant historical year for this entry is 1969.

Location. 44° 36.49′ N, 87° 26.011′ W. Marker is in Algoma, Wisconsin, in Kewaunee County. Marker can be reached from Steele Street east of Lake Street, on the right when traveling east. Marker is at Heritage Park. Touch for map. Marker is in this post office area: Algoma WI 54201, United States of America. Touch for directions.

Other nearby markers. At least 8 other markers are within 2 miles of this marker, measured as the crow flies. Christmas Tree Ship Point (about 400 feet away, measured in a direct line); Schooner Daniel Lyons (about 400 feet away); American Legion Park (about 800 feet away); The Church of St. Agnes-by-the-Lake (approx. ¼ mile away); Door-Kewaunee County College / Henry Diefenbach Sculptures (approx. 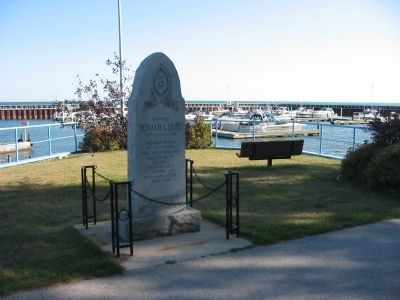 Regarding Officer Ronald L. Leist. Two men were presumed drowned late Thursday afternoon after they were swept off a pier into Lake Michigan while attempting to rescue another man. Authorities said 12-foot high waves crashed against the [south] pier sweeping Frank Pletcher, 22, of Milwaukee, who was fishing at the time, into the lake. His fishing companion, Wallace Schulist, 32, also of Milwaukee, managed to remain on the pier and was joined by Algoma patrolman Ronald Leist, 30, in an attempt to rescue him.

The Algoma patrolman rushed to the scene and attempted to pull Pletcher back onto the pier when another wave threw all three into the water. Pletcher had previously grabbed onto a life preserver tossed into the water by Schulist.

By standers, including Mayor Arthur Dettman, attempted to rescue the trio. Dettman, who rowed a boat to the end of the pier, got Pletcher to shore while the other two men disappeared in the pounding waves. 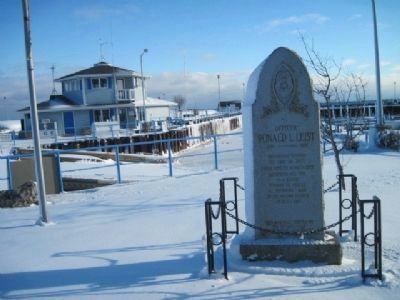 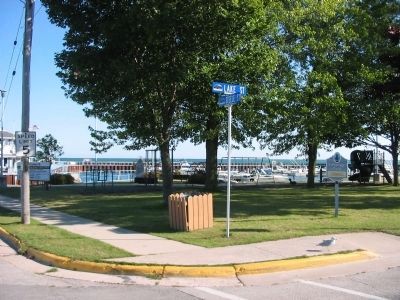