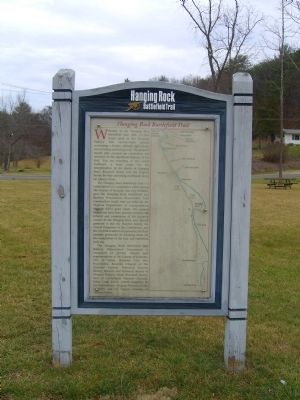 Welcome to the Hanging Rock Battlefield Trail. This 1.6 mile linear park is the Roanoke Valley’s first rails-to-trails project converting a former railroad right-of-way into a hiking and biking trail. The project’s master plan presents an orientation and overview of the significant features of the trail. Your are standing at the north trailhead, a focal point for the interpretation of the Battle of Hanging Rock, Buzzard’s Roost, and the Virginia Scenic By-Way extending northward along on Mason Creek.

The Hanging Rock Battlefield Trail is a culmination of a cooperative effort among the County of Roanoke, the City of Salem, and the Hanging Rock Battlefield and Railway Preservation Foundation. Trail construction funds were provided by the Virginia Department of Transportation through ISTEA grant funds. This project would not have been possible withoutthe interest and cooperation of the property owners in the Hanging Rock area. Special gratitude is due the Hinchee family, the United Daughters of the Confederacy, and the Norfolk Southern Corporation for their extreme generosity in donating lands for the completion of the trail and battlefield 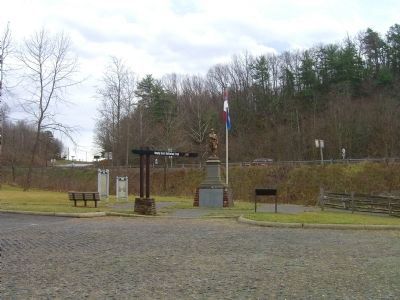 Photographed By Kevin W., December 28, 2008
2. Hanging Rock Battlefield Trail Marker
This marker is on the leftmost marker in this picture.

Click or scan to see
this page online
park site.

Erected 1999 by County of Roanoke, the City of Salem, and the Hanging Rock Battlefield and Railway Preservation Foundation.

Topics and series. This historical marker is listed in these topic lists: Charity & Public Work • Railroads & Streetcars. In addition, it is included in the Sons of Confederate Veterans/United Confederate Veterans, and the United Daughters of the Confederacy series lists.

Other nearby markers. At least 8 other markers are within walking distance of this marker. United Daughters of the Confederacy Monuments (here, next to this marker); 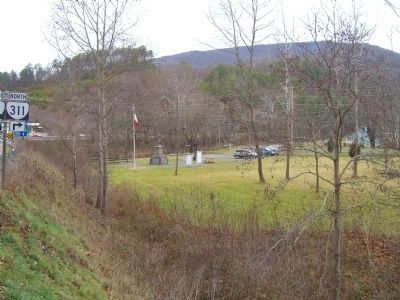 More about this marker. Marker is one of several interpretive signs along the cinder-surfaced, 1.7-mile long Hanging Rock Battlefield Trail that winds along Mason Creek and Kessler Mill Road in Salem, Virginia.

The map on the right of the marker outlines the route of the trail as it winds along the old rail bed.