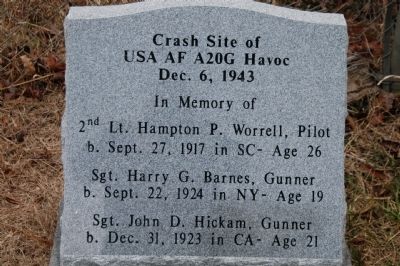 Topics. This historical marker is listed in this topic list: War, World II. A significant historical date for this entry is September 27, 1917. 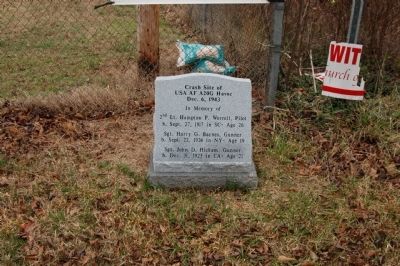 Also see . . .
1. Historical marker honors three World War II airmen. Go Upstate wensite entry:
Three men who died in Spartanburg County 65 years ago were remembered for the service they did their country Monday, near the site where they perished. (Submitted on January 10, 2009, by Michael Sean Nix of Spartanburg, South Carolina.)

3. Plane Crashes of Spartanburg. Slobot About Town website entry:
On Monday December 06, 1943 a formation of three planes would depart from the Florence Army Air Base on a routine training mission. (Submitted on April 18, 2011, by Brian Scott of Anderson, South Carolina.) 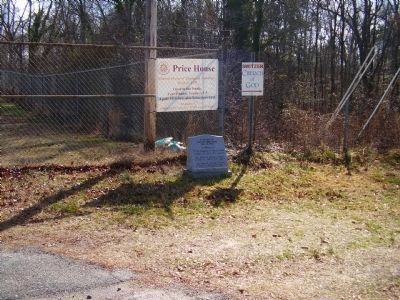 The morning of Dec. 6, 1943, an A-20-G attack bomber passed over the fields and forests of Spartanburg County on a routine training flight.

But one day shy of the second anniversary of Pearl Harbor, the nation found itself in times that were anything but routine.

The Allies needed enough planes to choke the skies over occupied Europe. That meant putting young men in cockpits and hustling them through training.

Often, as it did on this day, that expediency turned deadly.

Thick cloud cover and a lack of experience flying on instruments sent the plane slamming into farmland near Switzer. When the smoke cleared, all that remained was a heap of twisted metal, half-embedded in the earth.

Today, two local men are working with the Spartanburg County Historical Association to excavate the crash site and unlock the story behind the often-forgotten casualties of war: those who died in training.

Now, they are volunteering their expertise to help 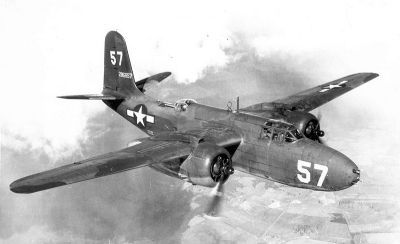 "Training accidents are not normally remembered as often as a combat loss," said Wilkie, 42.

Wilkie and Dicey also are helping start Broken Wings of the Carolinas, a nonprofit organization dedicated to memorializing aviation crash sites at home.

The men, who have family ties to military aviation, estimate South Carolina may hold hundreds of major and minor crash sites.

The Crash
On that December morning, three bombers took off from an Army air base in Florence en route to Greenville.

The planes -- two A-20-Gs and a B-25-D -- flew into thick clouds about 3,000 feet above Spartanburg County, according to an Army report issued about the crash.

Limited visibility separated the plane piloted by 2nd Lt. Hampton P. Worrell of Columbia and another plane from the formation.

At about 500 feet, Worrell came out of the cloud cover in a steep right banking turn, but the rate of descent was too great.

"He would have spent the last few seconds trying to pull out and save his crew," Wilkie surmised.

Shortly before 10 a.m., the plane slammed into the trees on Clarence Fowler's farm, according to an article published in the Spartanburg Herald.

Worrell -- along with Sgt. Harry G. Barnes of Dodgeville, N.Y., and Sgt. John Wickham of South Pasadena, Calif. -- died in the crash.

According to the Army report, weather and instrument flying inexperience caused the accident. The $79,055 airplane was "demolished" on impact.

It didn't take long for word of the plane crash to spread to Woodruff High School, where Joe Walden was a student. He lived near the crash site, and his principal told him about the accident.

Planes soaring overhead had become a common sight during the war, Walden recalled. Pilots used to fly low and scatter piles of lime kept on farms.

But the crash was big news on Switzer Road.

After school, Walden and other teenagers descended on the site in hopes of seeing the wreckage.

After the Army had carted away the bulk of the wreckage and the guards had left, he returned to pick up mementos.

Walden still has a piece of a map -- somewhere -- and plans to give it to the historical association if he can put his hands on it.

Unearthing an Angel
Wilkie and Dicey have been slowly unearthing the bomber wreckage since Jan. 16.

The slightness of the pieces makes the process methodical, but metal detectors point them in the right direction.

They mark spots of interest with orange flags the size of playing cards, mounted to wire-thin metal stakes.

"It's been mainly crumb- and potato chip-sized pieces of metal," said Wilkie, a cell phone strapped to the front of his overalls.

Dicey, who works for Bausch & Lomb in Greenville, sets his sights on larger chunks.

""I like the bigger pieces, something I can find a part number on," he said. "It's all part of the picture."

So far, a twisted piece of fuselage, a handful of bullets and an instrument box have ranked among the site's greatest finds. But Wilkie and Dicey suspect they'll find something larger.

The collection eventually will be displayed at the Regional Museum of Spartanburg County, along with information about the crew.

There are also plans to place a memorial at the site, something Wilkie has already done at two other sites in the county.

Susan Turpin, executive director of the historical association, said her organization's mission goes hand-in-hand with that of the men.

"Everything we do is about preserving the history of Spartanburg County," Turpin said, "and partnering with these guys is helping that mission and their goal of promoting these sites as well."

Wilkie put it another way.