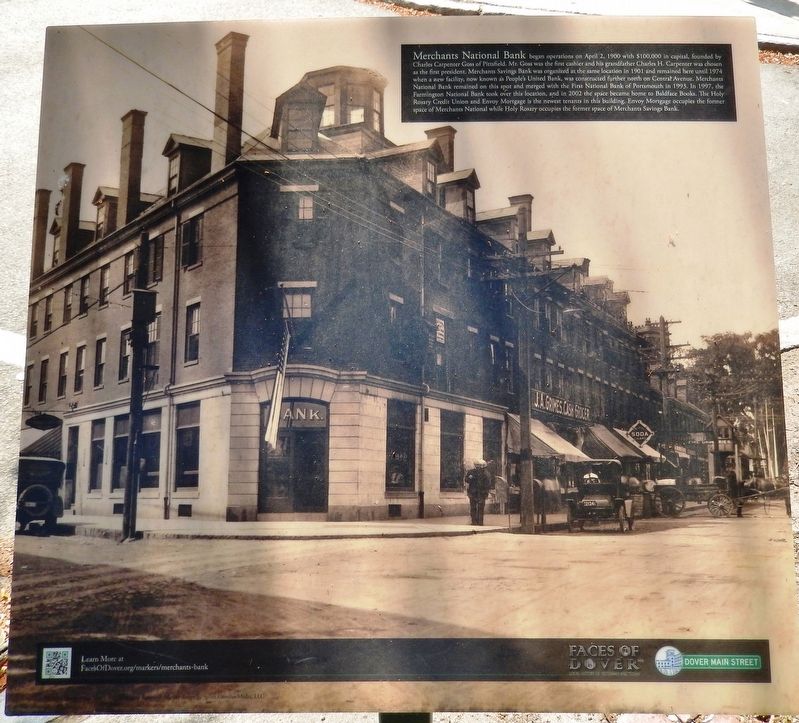 Merchants National Bank began operations on April 2, 1900 with $100,000 in capital, founded by Charles Carpenter Goss of Pittsfield. Mr. Goss was the first cashier and his grandfather Charles H. Carpenter was chosen as the first president. Merchants Savings Bank was organized at the same location in 1901 and remained here until 1974 when a new facility, now known as People's United Bank, was constructed further north on Central Avenue. Merchants National Bank remained on this spot and merged with the First National Bank of Portsmouth in 1993. In 1997, the Farmington National Bank took over this location, and in 2002 the space became home to Baldface Books. The Holy Rosary Credit Union and Envoy Mortgage are the newest tenants in this building. Envoy Mortgage occupies the former space of Merchants National while Holy Rosary occupies the former space of Merchants Savings Bank.

Topics. This historical marker is listed in this topic list: Industry & Commerce. A significant historical date for this entry is April 2, 1900. 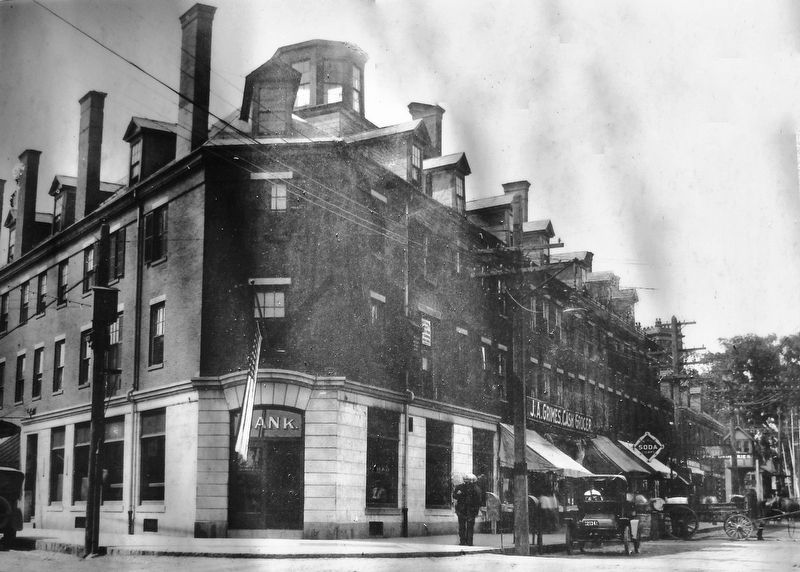 Click or scan to see
this page online
43° 11.913′ N, 70° 52.446′ W. Marker is in Dover, New Hampshire, in Strafford County. Marker can be reached from the intersection of Central Avenue (New Hampshire Route 9) and Third Street, on the left when traveling south. Marker is located along the sidewalk, directly east across Central Avenue (Main Street) from the subject building. Touch for map. Marker is at or near this postal address: 499 Central Avenue, Dover NH 03820, United States of America. Touch for directions. 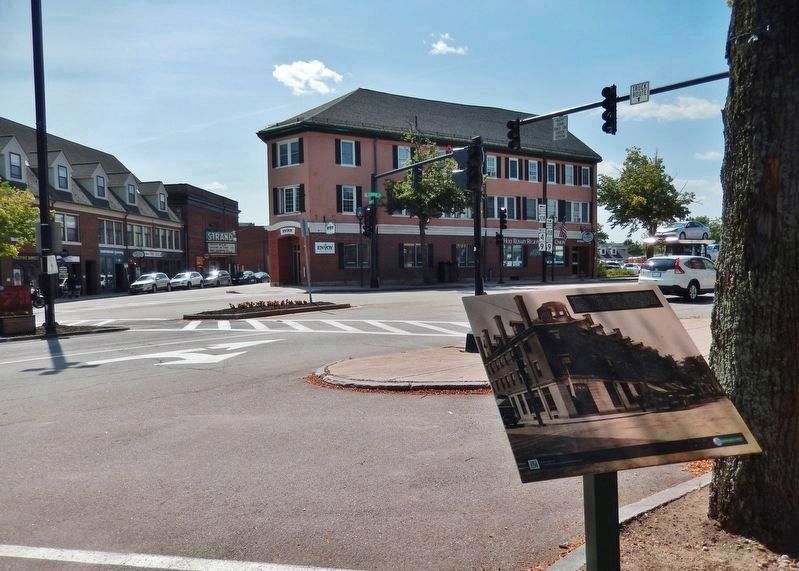 By Cosmos Mariner, July 9, 2019
3. Merchants National Bank Marker
Envoy Mortgage / Holy Rosary Credit Union building visible in background, across Central Avenue to the west of marker
and the Cocheco Savings Bank in 1872. They occupied this corner of Third Street until 1900 when the Merchants National Bank was founded. In 1910, Merchants purchased three buildings on the corner for expansion purposes and have been here ever since. (Submitted on July 4, 2020, by Cosmos Mariner of Cape Canaveral, Florida.) 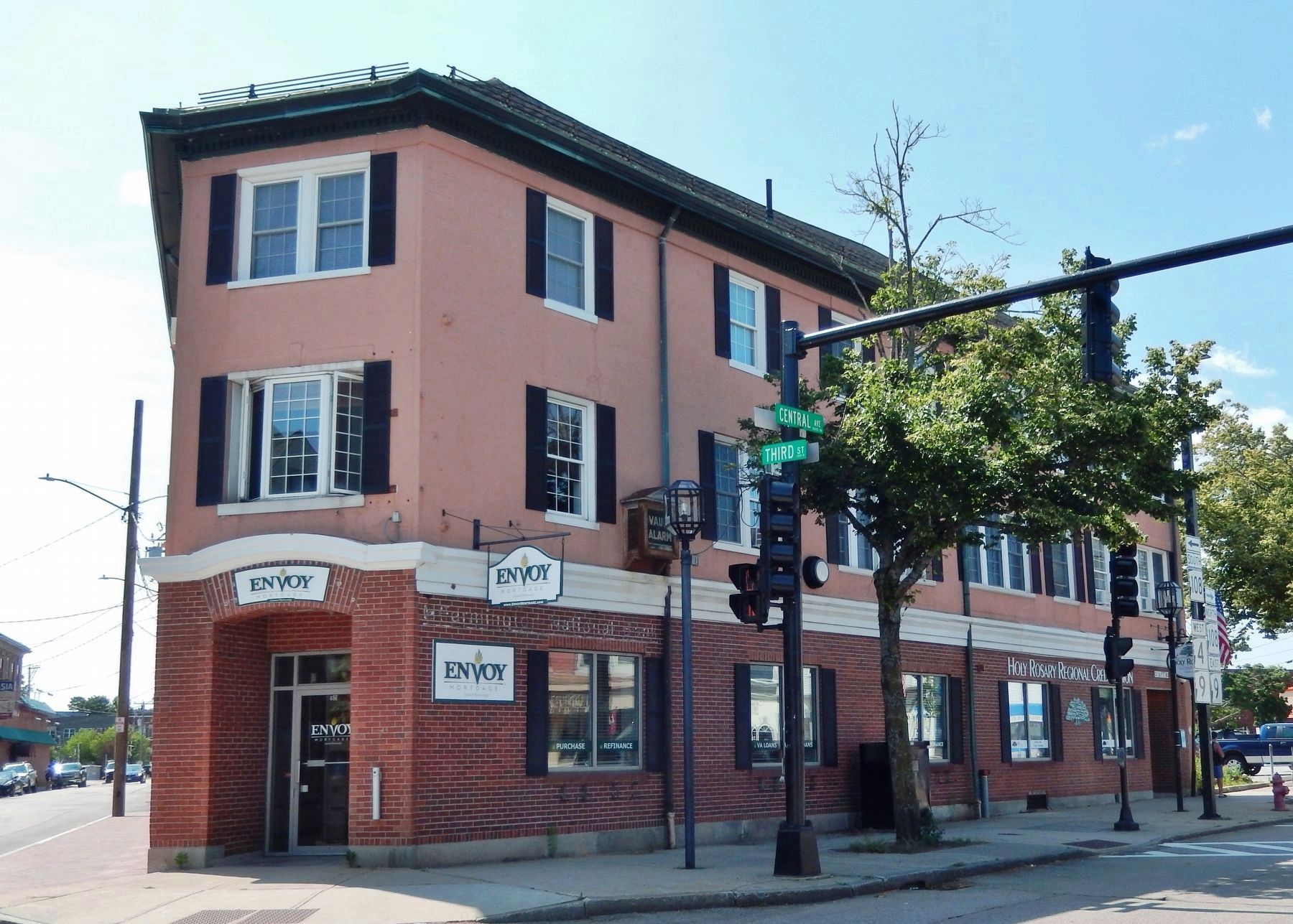