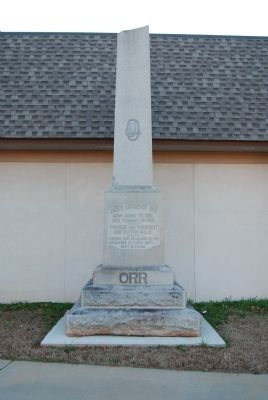 Topics. This historical marker is listed in this topic list: Industry & Commerce. A significant historical month for this entry is February 1810. 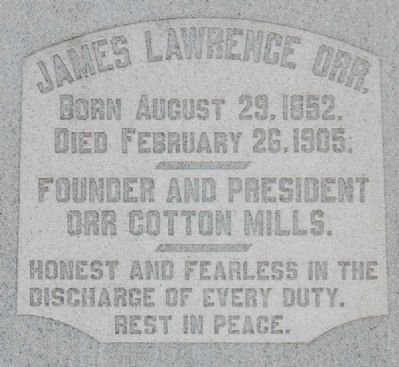 Click or scan to see
this page online
(within shouting distance of this marker); McGee Harness Shop (about 300 feet away, measured in a direct line); Virginia "Jennie" Gilmer (approx. 0.2 miles away); Anderson County Library (approx. ¼ mile away). Touch for a list and map of all markers in Anderson.

More about this marker. The marker was originally located on South Main Street, near the ruins of Orr's Mill. It was placed on the museum grounds after a tree fell over, breaking the monument.

Doctor Orr was born at Anderson June 5, 1855, and spent all his life in that city. He attended private schools, the King's Mountain Military School at Yorkville, completed a literary course in Furman University, and began the study of medicine under the late Dr. W.H. Nardin, Sr., at Anderson. In 1879 he graduated from Jefferson Medical College at Philadelphia, and returning to Anderson was devoted with all his talents and splendid abilities to professional work for a quarter of a century. 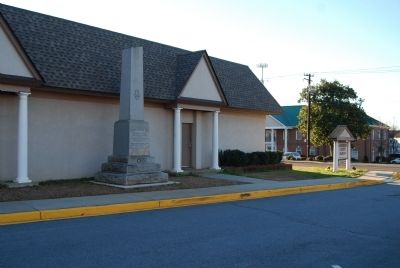 Photographed By Brian Scott, January 9, 2009
3. James Lawrence Orr Monument with
Anderson County Museum in Background
For a time he was associated with his preceptor Doctor Nardin. His abilities and experience made him esteemed as a consulting practitioner, and Governor Richardson appointed him a member of the first Board of Medical Examiners for the state. He also served as president of the Anderson County Medical Society and vice president of the State Medical Society, and was surgeon for the Charleston and Western Carolina and the Blue Ridge Railroad Companies.

While in active practice and more particularly after retiring from his profession he gave evidence of his marked qualifications as a business man. He entered the drug business at Anderson in 1883, was prominent in connection with the first building and loan association at Anderson, and after the death of his brother Col. James L. Orr in 1905 he succeeded him in the presidency of the Orr Cotton Mill at Anderson. He held that position at the time of his death, and he had also been vice president of the Farmers and Merchants Bank at Anderson, and president and treasurer of the old Anderson Light and Power Company. He was one of the original trustees of the Anderson graded schools, and served many years as a vestryman of the Episcopal Church. 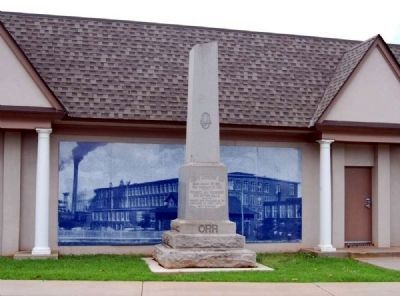 Photographed By Brian Scott, May 26, 2009
4. James Lawrence Orr Monument
The museum wall has recently been decorated with an enlarged photograph of Orr's Mill.
Both sons have achieved distinction as electrical engineers. Mrs. Orr is a granddaughter of Dr. Charles Louis Gaillard, formerly of Charleston, of French Huguenot origin, while her paternal grandfather was Banister Allen of Abbeville County and of English ancestry. (Source: History of South Carolina Volume 3 by Yates Snowden (1920), pgs 111-113.)
— Submitted December 6, 2009, by Brian Scott of Anderson, South Carolina. 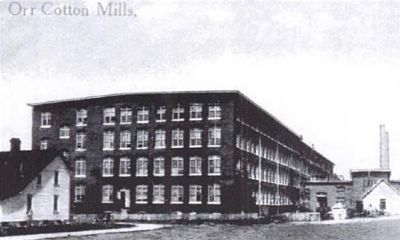 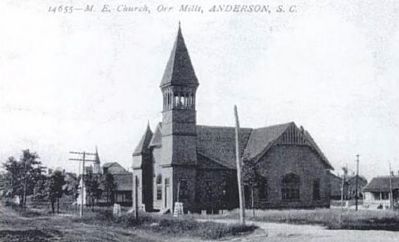 South Carolina Postcards, Vol. IX: Anderson County, by Howard Woody, 1908
6. Methodist Episcopal Church, Orr Mills
The Methodist Episcopal Church on South Main Street is shown on the postcard scene above. It is one of the two Orr Mill churches that the mill built for the operatives. Directly behind the Methodist Church is the Baptist Church. The mill gave the lots, 15 percent of the construction costs, and $100 each annually for expenses. Rev. S.T. Creech was the pastor of this Methodist Church in 1905. 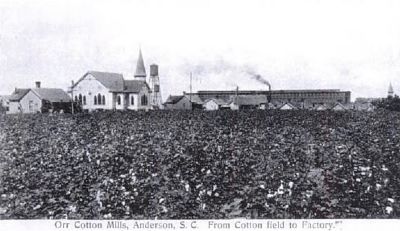 South Carolina Postcards, Vol. IX: Anderson County, by Howard Woody, 1908
7. Orr Cotton Mills, from Cotton Field to Factory
This view with the cotton field symbolized the cycle of mill economics. Farmers grew and sold cotton; cotton was turned into fabric at the mill; and jobs were thus created for operatives. The mills supported churches and schools and contributed taxes to both local and state governments. The village Baptist Church, shown above the left side, had a membership of 254 in 1909 and Rev. H.C. Martin was the pastor. 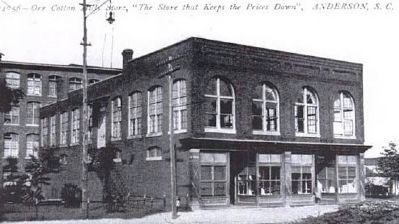 South Carolina Postcards, Vol. IX: Anderson County, by Howard Woody, 1908
8. Orr Cotton Mills Store
Each mill built commissary-type stores for their operatives, who were usually poor families that came to the mills seeking a steady source of income and needing low cost housing and credit. The factory would assign the family a cottage and let them obtain food, clothing, and medicines on credit and subtract those expenses from the salaries of the fathers, mothers, and children at the end of each two-week payroll. The store stocked every necessity, including coffins. 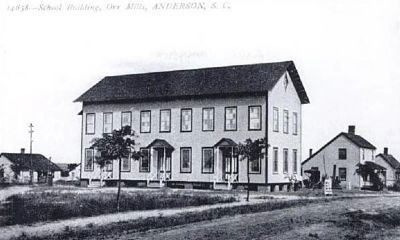 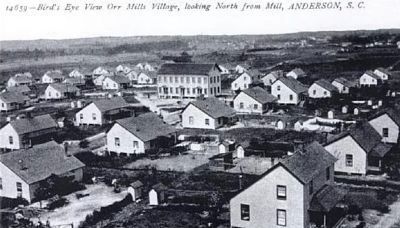