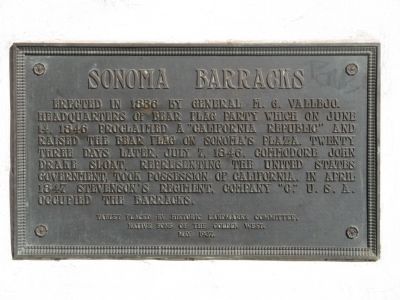 Topics and series. This historical marker is listed in these topic lists: Settlements & Settlers • War, Mexican-American. In addition, it is included in the California Historical Landmarks, and the Native Sons/Daughters of the Golden West series lists. A significant historical month for this entry is April 1847. 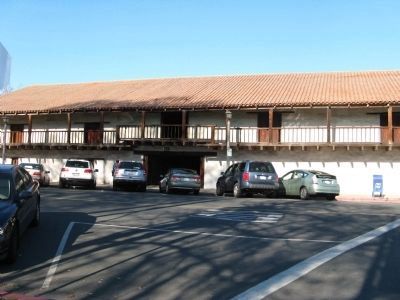 Click or scan to see
this page online
Bear Flag Monument. Touch for map. Marker is in this post office area: Sonoma CA 95476, United States of America. Touch for directions.

Regarding Sonoma Barracks.
The two-story, wide-balconied, adobe barracks facing Sonoma's central plaza was built to house Mexican army troops under the command of General Vallejo. These troops first arrived in Sonoma in 1834 when Vallejo, then the Commandant of the Presidio at San Francisco, was instructed to move his garrison to Sonoma. From then until 1846, Sonoma was the headquarters of the commandant of the Frontera del Norte - the Mexican provincial frontier of the north. Actual construction of the adobe barracks building probably took place in stages, but was more or less completed in 1840 and '41.

This site was designated 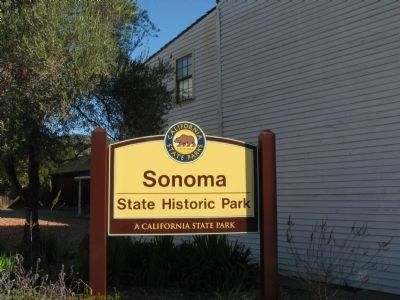 3. Sonoma State Historic Park. The historic, picturesque town of Sonoma is located in the heart of the beautiful Wine Country between Napa and Santa Rosa off Highway 12. Situated around a central plaza (the largest of its kind in California) filled with charming shops and restaurants, the city is home to Sonoma State Historic Park—site of the northernmost Franciscan Mission in California and birthplace of the California State Bear Flag. (Submitted on January 13, 2009, by Syd Whittle of Mesa, Arizona.)

Additional commentary.
1. The Barracks
This Monterey Colonial, two-story adobe was built by Indian labor under the direction of Gen. Vallejo for use as Mexican Troop Headquarters. English settler Mark West served as contractor.
Following the raising of the American Flag, the Barracks served as U.S. military quarters in the 1840s and 1850s. Colonel E. 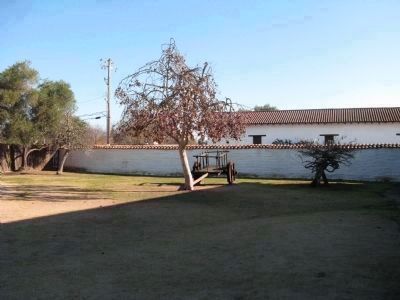 Photographed By Syd Whittle, January 10, 2009
4. View of the Barracks Courtyard
Mission San Francisco Solano is in the background.
Click for more information.
Stevenson’s New York Regiment was quartered here from April 4, 1847 to August 25, 1848. The U.S. Military Dragoons (Cavalry) remained in Sonoma until 1852.
The Barracks was used by Vallejo in the 1850’s as a winery. It was also used as a print shop and an experimental laboratory for raising silkworms. Solomon Schocken bought it on June 15, 1878 for a general merchandising store, using the top floor for his home. In August, 1880, Frederick Clewe leased the store for $50. Later, the building was used as a saloon, a shop and law offices. In 1935, Walter L. Murphy, editor and publisher of the Sonoma Index-Tribune, bought the Barracks and refurbished the second floor for his family. The first floor was rented out for offices and other uses.
The State purchased the building in late 1950s. Formerly a prime example of adobe construction of the late 1830s, the building has been reconstructed with steel reinforcements by the State.
Source: Sonoma Walking Tour Brochure
— Submitted January 13, 2009, by Syd Whittle of Mesa, Arizona. 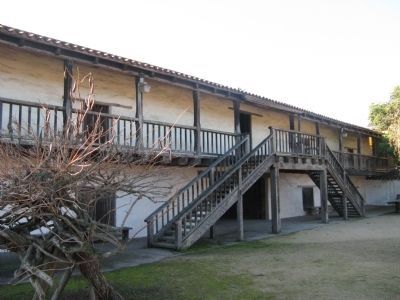 Photographed By Syd Whittle, January 10, 2009
5. Back of Barracks Viewed from the Courtyard 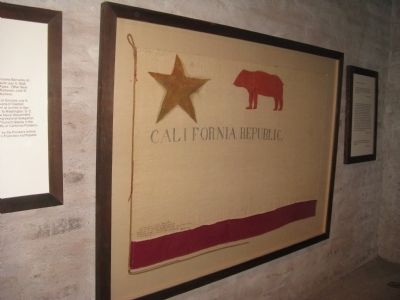 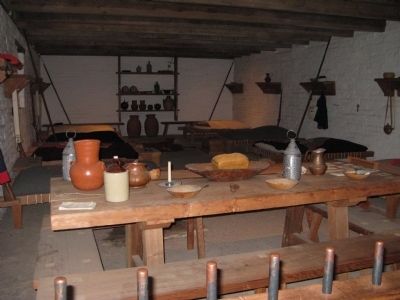 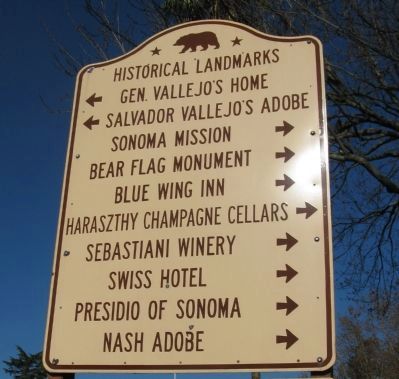 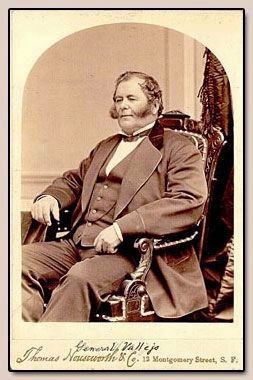 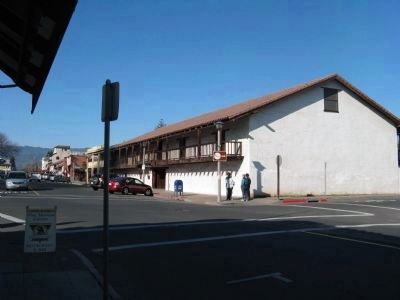