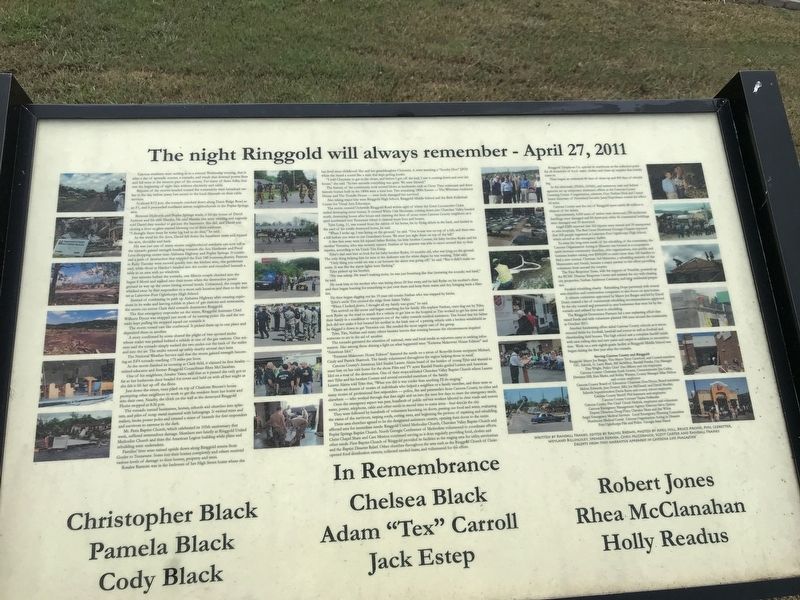 Catoosa residents were settling in to a normal Wednesday evening, that is after a day of sporadic storms, a tornado, and winds that downed power lines and fell trees in the western part of the county. For many of these folks, that was the beginning of eight days without electricity and cable.

Reports of the storms headed toward the community were broadcast earlier in the day before many lost access to the local channels on their cable services.

At about 8:15 p.m. the tornado touched down along Davis Ridge Road as an F1, and it proceeded northeast across neighborhoods in the Poplar Springs area.

Between Holcomb and Poplar Springs roads, it hit the house of David Armour and his wife Marsha. He said Marsha saw trees twisting and urgently told David they needed to get into the basement. She did, and David was closing a door as glass started blowing out in their sunroom. "I thought there must be some big hail to do that,” he said.

As the wind hit the door, David fell down the basement stairs and injured his arm, shoulder and back.

His was just one of many stories neighborhood residents can 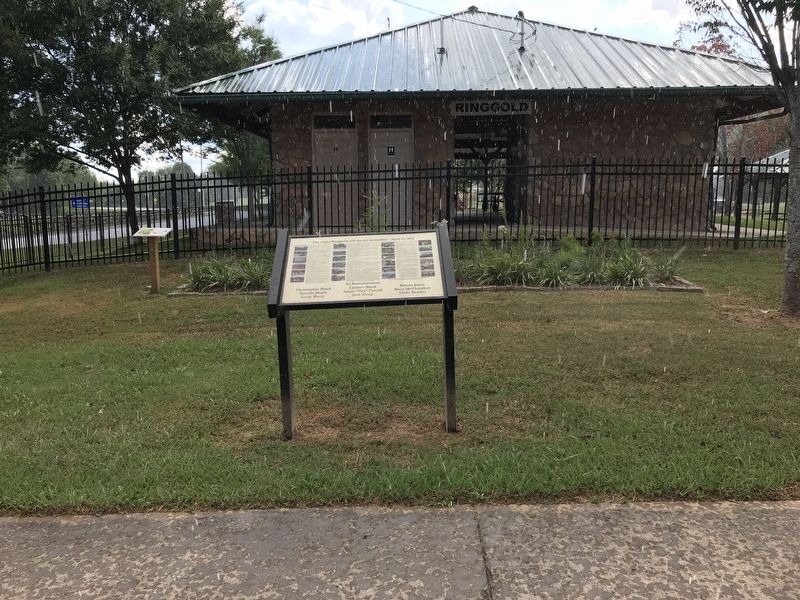 Click or scan to see
this page online
now tell as the tornado gained strength heading towards the Ace Hardware and Food Lion shopping center near Alabama Highway and Poplar Springs. It continued a path of destruction that crippled the Exit 348 business district. Patrons in Ruby Tuesday were moved quickly into the kitchen area, one gentleman said, while those at Hardee's headed into the cooler and crouched beneath a table in an area with no windows.

Just minutes before the tornado, one Illinois couple checked into the Super 8 Motel and walked into their room when the destructive power ground its way up the street hitting several hotels. Unharmed, the couple was whisked away by first responders to a more safe location and then to the shelter at Lakeview-Fort Oglethorpe High School.

Instead of continuing its path up Alabama Highway after creating explosions in its wake and leaving rubble in place of gas stations and restaurants, the storm cut across Clark field towards downtown Ringgold.

The first emergency responder on the scene, Ringgold Assistant Chief Wilborn Dycus was stopped just north of its turning point. He said the tornado kept pulling his stopped squad car towards it.

The storm tossed cars like cordwood. It picked them up in one place and deposited them in another.

A story confirmed by some shared the plight of two spotted mules whose trailer was parked behind a vehicle at one of the gas stations. One witness said the tornado simply sucked the two mules out the back of the trailer and into the air. The mules turned up safely nearby several days later.

As the storm finished its crossing at Clark field, it claimed its first fatality—retired educator and former Ringgold Councilman Rhea McClanahan.

One of his neighbors, Amalee Yates, said that as it passed she only got as far as her bathroom door headed for cover and held on with all her might as she felt it lift her up off the floor.

Just down the street, trees piled on top of Charlotte Broom's house prompting other neighbors to work to get the resident from her home and into their own. Nearby, the clock on the wall at the destroyed Ringgold Florist stopped at 8:26 p.m.

The tornado turned businesses, homes, schools and churches into splinters, and piles of scrap metal scattered with belongings. It twisted trees and trailers, broke power poles and created a maze of hazards for first responders and survivors to traverse in the dark.

Families' lives were turned upside down along Ringgold streets from Guyler to Tennessee. Some lost their homes completely and others received various levels of damage to their homes, property and trees.

Rosalee Ransom was in the bedroom of her High Street home where she has lived since childhood. She and her granddaughter Cheyenne, 4, were watching a "Scooby Doo” DVD when she heard a sound like a train that kept getting louder.

"I told Cheyenne to get in the closet, and before I got off the bed, I saw it coming down and over the house,” she said. "In two seconds everything was quiet. We were blessed."

The history of the community took several blows as landmarks such as Chow Time restaurant and three historic homes built in the 1800s were a total loss. Two remaining 1800s homes—The Whitman-Anderson House and The Trundle House—were both damaged but survived.

The storm crossed Ooltewah-Ringgold Road within sight of where the Great Locomotive Chase ended destroying more homes. It crossed White Oak Mountain, coming down into Cherokee Valley headed north, destroying house after house and claiming the lives of seven more Catoosa County neighbors at it sped northward into Tennessee where it claimed more lives and homes.

Tyler Long, 11, was tossed from the rubble of his home, hit by flying debris in the back, and landed in the yard of his totally destroyed home, he said.

"When I woke up, I was laying on the ground,” he said. "Our house was on top of a hill, and there was a hill before you went to our Grandma's house. We were just right there on top of the hill."

A few feet away were his injured father Robbie, his little brother Conner, his baby brother Ryder and his mother Veronica, who was severely injured. Neither of his parents was able to move around due to their injuries, according to his Uncle Tim Estep.

Tyler's dad sent him to look for his baby brother Ryder, 10 months old, who was lying on the ground. The only thing helping him be seen in the darkness was the white diaper he was wearing, Tyler said.

"Only thing you could see was a car because the alarm was going off,” he said. "But it didn't make no noise. It was like the alarm lights were flashing."

Tyler picked up his brother.

"He was asleep. He wasn't making noise, he was just breathing like that (imitating the sounds) real hard," he said.

He took him to his mother who was laying about 20 feet away, and he laid Ryder on bis mother's chest and then began hunting for something to put over them and keep them warm and dry, bringing back a blanket.

He then began digging out his 19-year-old cousin Nathan who was trapped by bricks.

"When I looked down, I thought all my family was gone,” he said.

Tim arrived on the scene and began searching for his family. His nephew Nathan, once dug out by Tyler, took Ryder up the road to search for a vehicle to get him to the hospital as Tim worked to get his sister and their family in a condition to transport out of the valley towards medical assistance, Tim found that his father Jack did not make it but located his mother in the back seat of a passing vehicle with a broken windshield as he flagged it down to get Veronica out. She needed the most urgent care of the group.

Tyler, Tim, Nathan and many others became heroes that evening because the circumstances required someone to act in the aid of another.

The tornado garnered the attention of national, state and local media as reporters came in seeking information. Also among those shining a light on what happened were "Extreme Makeover: Home Edition” and "American Idol."

"Extreme Makeover: Home Edition” featured the needs on a rerun of Rossville home recipients Michael, Cindy and Patrick Sharrock. The family volunteered throughout the region helping those in need.

Catoosa County's American Idol finalist Lauren Alaina heard of the heroics of young Tyler and wanted to meet him on her visit home for the show. Film and TV actor Randall Franks guided Lauren and American Idol on a tour of the destruction. One of their stops included Cherokee Valley Baptist Church where Lauren met Tyler and his brother Conner and several extended members of the family.

Lauren Alaina told Tyler that, "What you did is way cooler than anything I'll do singing."

There are dozens of stories of individuals who helped a neighbor or a family member, and there were as many stories of professional first responders—police, fire and paramedics from Catoosa County, its cities and elsewhere—who worked through that first night and on into the next few days to meet the emergency needs.

Once the emergency aspect was past, hundreds of public service workers labored to clear roads and restore water, power, telephone, cable and other needs in record time to some areas — four days in the city.

They were followed by hundreds of volunteers knocking on doors, passing out food and water, evaluating the status of the survivors, tarping roofs, cutting trees, and beginning the process of repairing and rebuilding.

Three area churches agreed to be the designated assistance centers, opening their doors to the entire affected area for immediate needs: Ringgold United Methodist Church, Cherokee Valley Baptist Church and Poplar Springs Baptist Church. North Georgia Conference of Methodists volunteered to coordinate efforts. Christ Chapel Share and Care Mission continued serving as it does regularly providing food, clothes and other needs. First Baptist Church of Ringgold provided its facilities as the staging area for utility serviceman and the Baptist Disaster Relief. Other churches throughout the area such as the Ringgold Church of Christ opened food distribution centers, collected needed items, and volunteered for the effort.

Ringgold Telephone Co. opened its warehouse as the collection point for all donations of food, water, clothes and clean-up supplies that initially came in.

Then began an estimated 40 days of clean-up and 400 days of rebuilding.

Catoosa County and the city of Ringgold spent nearly $6 million to dispose of the debris.

Angel EMS reported that 362 injuries were treated and 39 transported to area hospitals. The Red Cross Northwest Georgia Chapter reported that 268 people registered at Lakeview-Fort Oglethorpe High School, which served as the emergency shelter.

To meet the long-term needs of the rebuilding of the community, the Catoosa Organization Acting in Disaster was formed in a cooperative spirit between community churches, civic organizations, non-profits and business leaders raising over $500,000 to assist more than 160 families to find a new normal. Christian Aid Ministries, a rebuilding ministry of the Mennonites and Amish, became a major partner in this effort providing volunteers from around the country.

The First Response Team, with the support of Peterbilt, powered up the RUMC Disaster Response Center and assisted the city with clearing city properties, Nathan Anderson Cemetery and later residential properties.

A citizens committee appointed by Mayor Joe Barger and led by David Dunn created a list of commercial rebuilding recommendations approved by the city council and presented to area businesses that were hit by the tornado and utilized by most in rebuilding.

The Ringgold Downtown Partners led a tree replanting effort that raised funds and with volunteers planted 348 trees around the community in October 2011.

Another fundraising effort aided Catoosa County schools as it reconstructed fields for football, baseball and soccer as well as football and cheerleading field houses. The high school saw a complete facelift inside with new ceiling tiles and new paint and carpet in addition to reconstruction. Work on a new eighth-grade facility at Ringgold Middle School was begun during the first year after the tornado.

Topics. This historical marker is listed in this topic list: Disasters. A significant historical date for this entry is April 27, 2011.