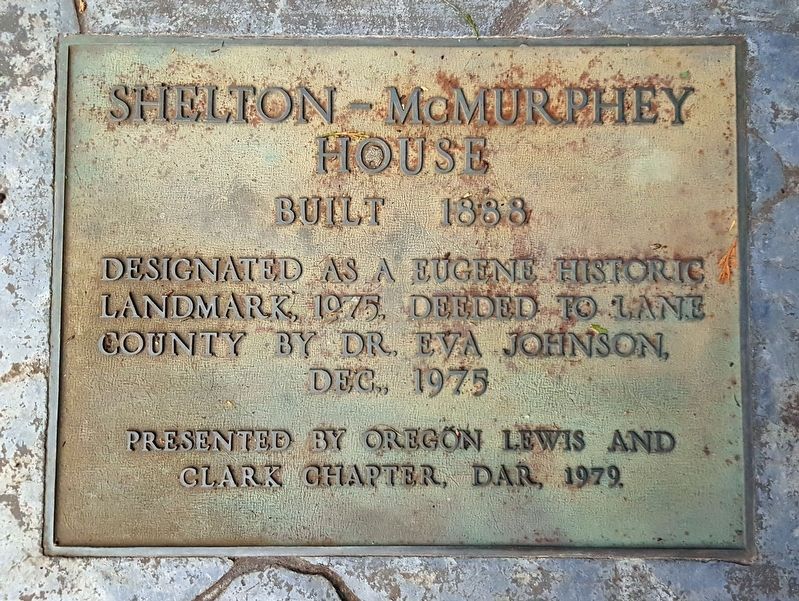 Topics and series. This historical marker is listed in this topic list: Notable Buildings. In addition, it is included in the Daughters of the American Revolution (DAR) series list. A significant historical month for this entry is December 1975.

Location. 44° 3.38′ N, 123° 5.531′ W. Marker is in Eugene, Oregon, in Lane County. Marker can be reached from Shelton McMurphey Blvd west of Pearl Street. Touch for map. Marker is at or near this postal address: 303 Willamette Street, Eugene OR 97401, United States of America. Touch for directions. 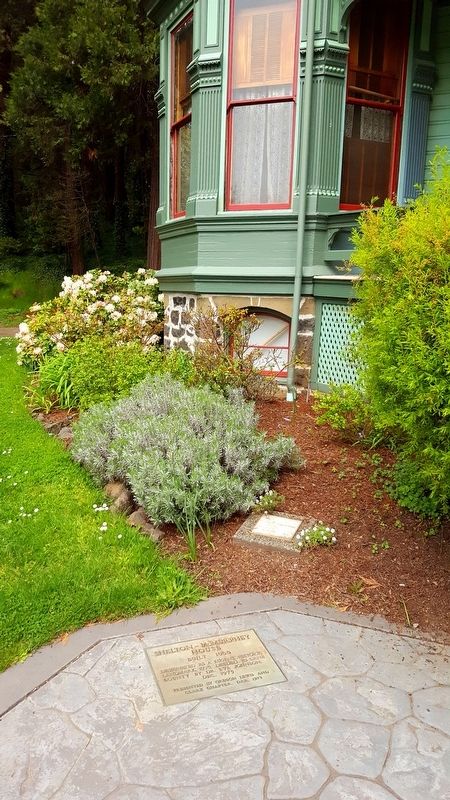 Regarding Shelton – McMurphey House. The following is taken from the Shelton McMurphey Johnson House website:

A Brief History
The house was built in 1888 for Dr. T.W. Shelton. Salem architect W.D. Pugh designed the house, and Nels Roney, a prominent local builder, constructed the house for approximately $7,000.

After Dr. Shelton died in 1893, his widow deeded the house to her daughter and son-in-law, Alberta and Robert McMurphey, who raised a family and lived in the house for many years. In 1950, Eva and Curtis Johnson purchased the house, and Eva Johnson lived and worked there until her death in 1986.

Floor Plans, Furnishings, and Changes
The full basement originally included a laundry room with a wood stove for boiling the laundry, a fruit and vegetable storage room, and a wood-burning furnace. During the summer the basement was filled with wood for the coming winter. In 1988 the basement was remodeled to create an apartment for the groundskeeper and caretaker.

The first floor, which is open to the public, currently consists of a pantry, kitchen, back porch, 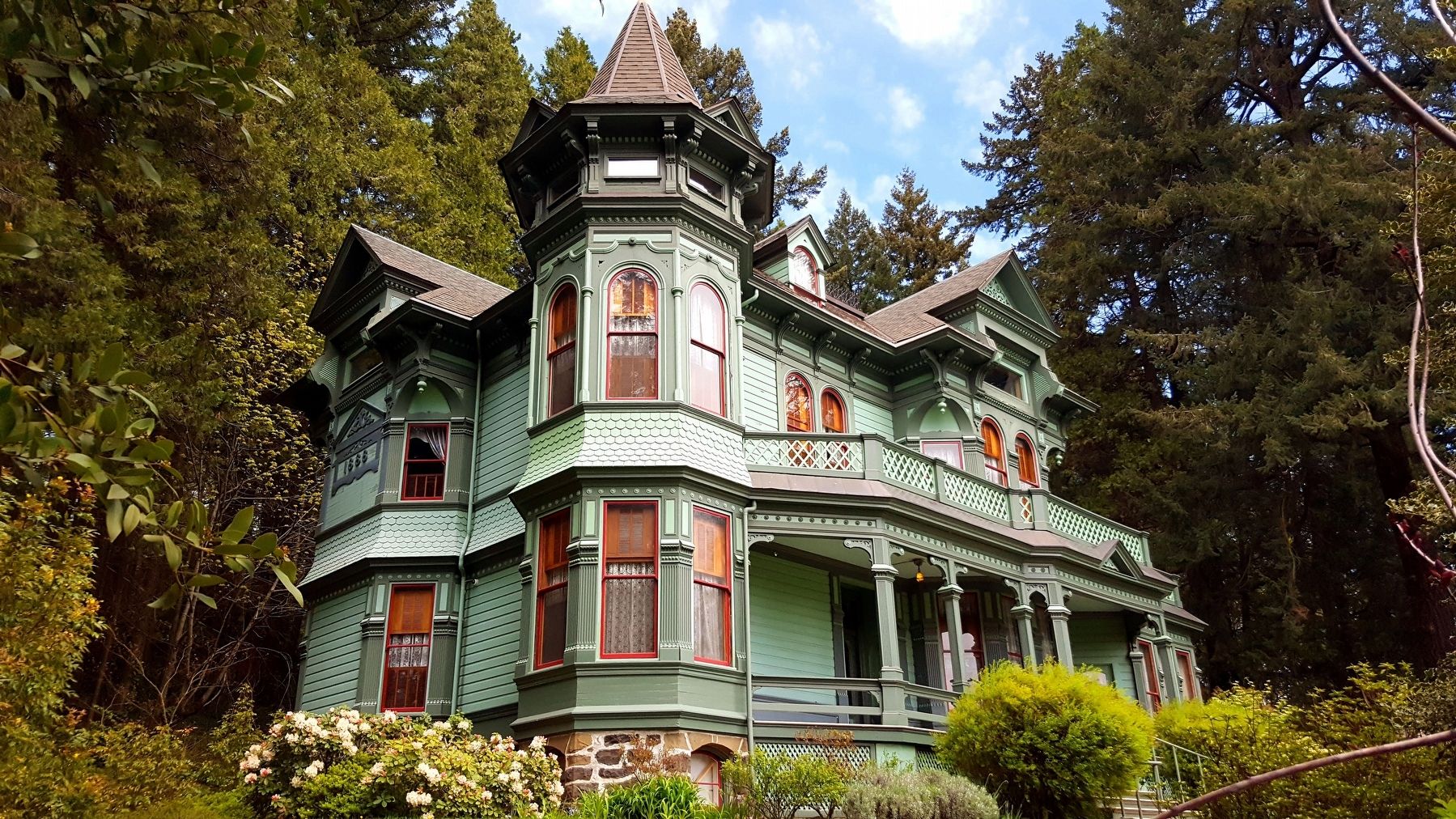 In 1919, the conservatory or sun room was enlarged to create an office for Mr. McMurphey. Around 1930, a large, built-in cabinet was constructed in the first-floor hallway to house Native American artifacts and early colonial antiques.

The second floor contains three bedrooms, the “hired girl’s room”, a sleeping porch and a bathroom. The roof of the veranda and the conservatory on the first floor is roofed in copper and is accessible through the windows on the second floor.

The central staircase connects the attic story to the second floor. The attic area includes a small room in the turret, a south-facing room and a large open area. A stationary ladder through a roof scuttle provided access to the roof and a widow’s walk on top of the roof.

Over the years a number of changes have been made in the original floor plan. An upstairs bathroom was added, replacing the need for a washstand waste jar and under-the-bed chamber pot. An upstairs sleeping porch was constructed around 1912. The entire McMurphey family slept on the porch, using heated bricks wrapped in towels to keep their feet warm in winter.

The history of the house includes two major fires. The first one was set in 1887 by a disgruntled 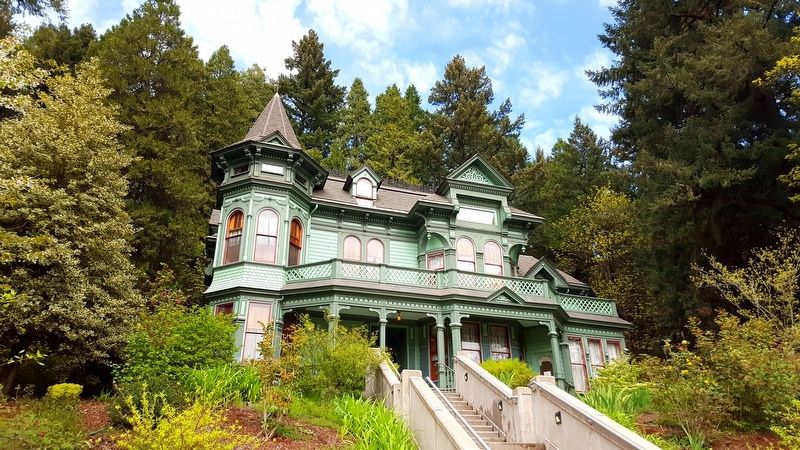 Photographed By Douglass Halvorsen, April 20, 2018
4. Shelton - McMurphey House
construction worker. In 1950, a fire destroyed parts of the house, which was being remodeled by the Johnsons.

In 1951, the Johnsons replaced the turret, which had been removed in 1915. They also restored the exterior of the house, and repainted it in the original green. Later, the upstairs sleeping porch was converted to a kitchen, and the upstairs was rented to University students.

Today, the City of Eugene owns and maintains the Shelton-McMurphey-Johnson House with the help of local volunteers.

This former residence was listed in the National Register of Historic Places in 1984. 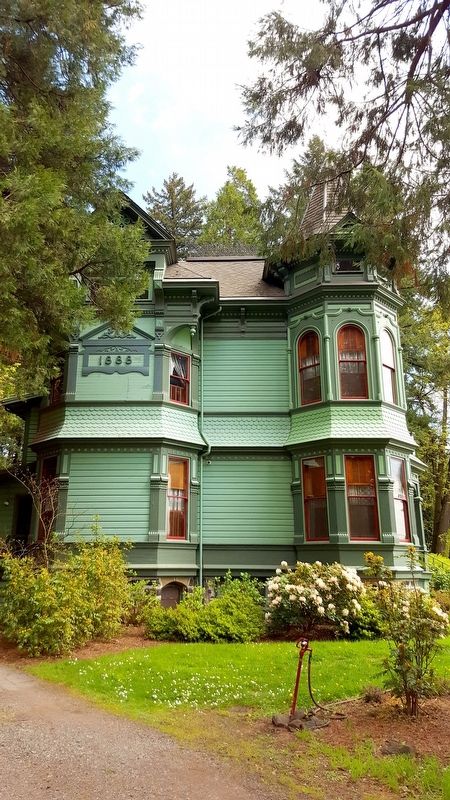 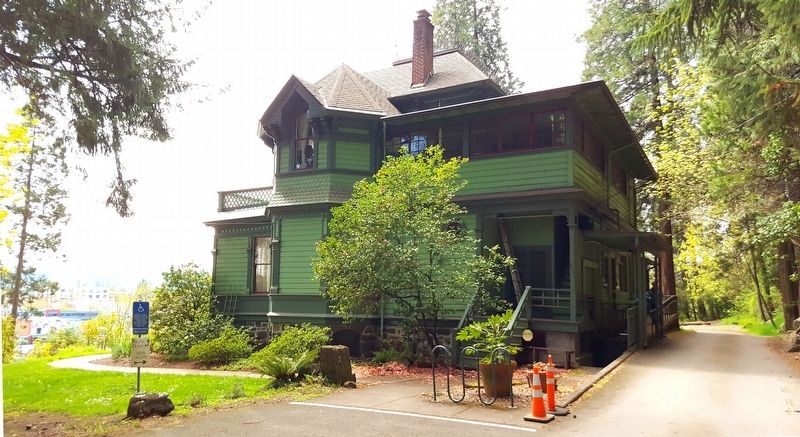