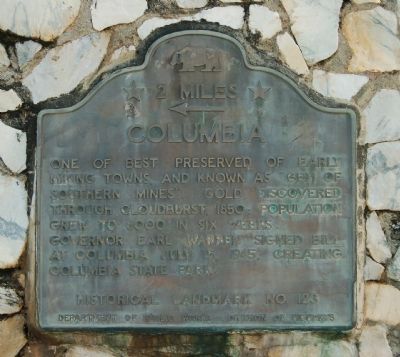 Photographed By Barry Swackhamer, March 2, 2012
1. Columbia Marker
Inscription.
Columbia. ← 2 Miles. One of the best preserved of early mining towns and known as “Gem of Southern Mines”. Gold discovered through cloudburst 1850. Population grew to 6000 in six weeks. Governor Earl Warren signed bill at Columbia July 15, 1945, creating Columbia State Park. . This historical marker was erected by Department of Public Works – Division of Highways. It is Near Columbia in Tuolumne County California

Topics and series. This historical marker is listed in these topic lists: Notable Places • Settlements & Settlers. In addition, it is included in the California Historical Landmarks, and the National Historic Landmarks series lists. A significant historical date for this entry is July 15, 1848.

Other nearby markers. At least 8 other markers are within 2 miles of this marker, measured as the crow flies. Shaw’s Flat (approx. 0.7 miles away); Springfield 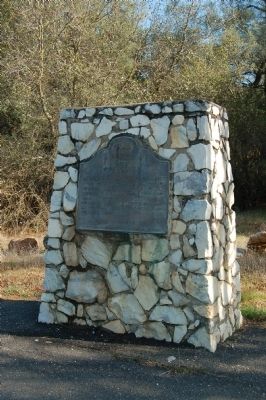