Topics and series. This historical marker is listed in this topic list: Notable Buildings. In addition, it is included in the Carnegie Libraries, and the Michigan Historical Commission series lists. A significant historical year for this entry is 1921. Photographed By Kathy Garman, August 3, 2019
2. The Marlette District Library and its Historical Marker

Click or scan to see
this page online
43° 19.55′ N, 83° 4.8′ W. Marker is in Marlette, Michigan, in Sanilac County. Marker is on Main Street (Michigan Route 53) south of Ervin Street, on the right when traveling south. Touch for map. Marker is at or near this postal address: 3116 Main St, Marlette MI 48453, United States of America. Touch for directions.

Additional commentary.
1. The Origin of Marlette
Robert Stinson was the first person to claim government land in the area. In October, 1856, a committee of settlers petitioned the Sanilac County Board of Supervisors to allow the growing community to become a township. The name chosen was suggested by William Rudd, who found the name “Marlatt” 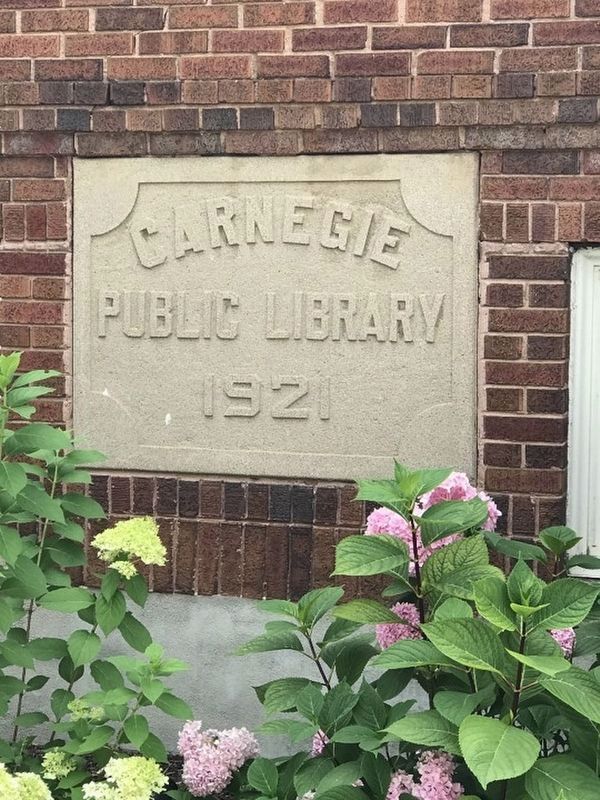 Photographed By Kathy Garman, August 3, 2019
3. The Marlette District Library Cornerstone
carved into the end of a log used in the construction of a shanty across from his farm. Marlatt apparently was the name of the mother of two young men who had come to this area to build a mill, but failed to do so, returning to Canada a short time later. But not before carving their mother’s name into the log of their shanty. William Rudd found that carving and suggested using the name Marlette, a form of the word Marlatt, as the name of the new township. The township was officially established in 1859.
— Submitted August 8, 2020, by John Garman of Rochester Hills.
Credits. This page was last revised on August 10, 2020. It was originally submitted on August 8, 2020, by John Garman of Rochester Hills. This page has been viewed 71 times since then and 7 times this year. Photos:   1, 2, 3. submitted on August 8, 2020, by John Garman of Rochester Hills. • Mark Hilton was the editor who published this page.
Share this page.