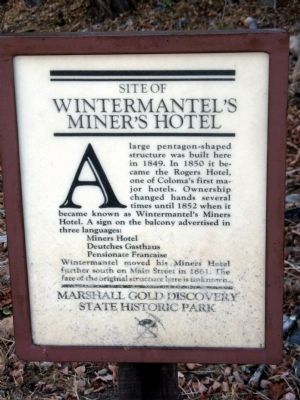 , Wintermantel moved his Miner’s Hotel further south on Main Street in 1861. The fate of the original structure here is unknown. . This historical marker was erected by Marshall Gold Discovery State Historic Park. It is in Coloma in El Dorado County California

A large pentagon-shaped structure was built here in 1849. In 1850 it became the Roger’s Hotel, one of Coloma’s first major hotels. Ownership changed hands several times until 1852 when it became known as Wintermantel’s Miner's Hotel. A sign on the balcony advertised in three languages:

Wintermantel moved his Miner’s Hotel further south on Main Street in 1861. The fate of the original structure here is unknown.

Topics. This historical marker is listed in these topic lists: Industry & Commerce • Settlements & Settlers. A significant historical year for this entry is 1849.

Location. 38° 48.006′ N, 120° 53.453′ W. Marker is in Coloma, California, in El Dorado County. Marker can be reached from Main Street (State Highway 49) when traveling south. Marker is located within the boundaries of the Marshall Gold Discovery State Historic Park. Touch for map. Marker is in this post office area: Coloma CA 95613, United States of America. Touch for directions.

Other nearby markers. At least 8 other markers are within walking distance of this marker. Winters’ Hotel (here, next to this marker); 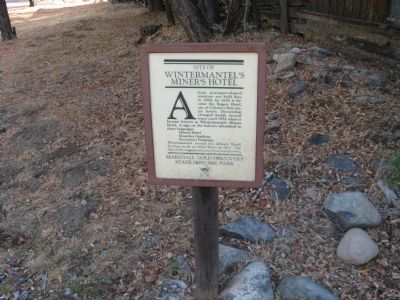 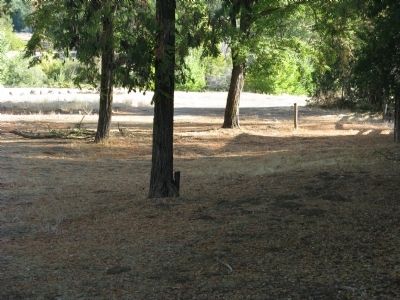 Editor’s want-list for this marker. Exact GPS Coordinates. Coordinates given are estimates. • Can you help?
Share This Page.