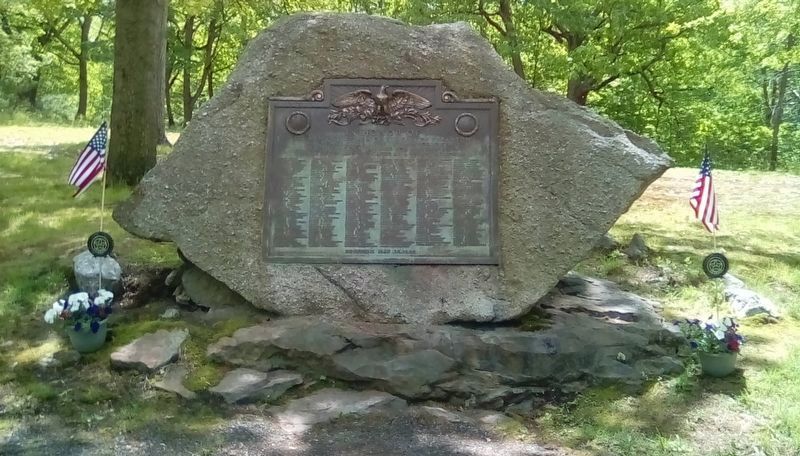 Photographed By Janice M. Gavern, May 31, 2020
1. World War Memorial, Scranton Pa.
Inscription.
World War One Memorial. . In honor of the men and women of the City of Scranton who gave their lives in the World War for their country and for all of mankind these trees are dedicated as a living memorial. , (list of the dead) . This memorial was erected in 1920. It is in Scranton in Lackawanna County Pennsylvania

In honor of the men and women of the City of Scranton who gave their lives in the World War for their country and for all of mankind these trees are dedicated as a living memorial.

Location. 41° 24.048′ N, 75° 38.584′ W. Marker is in Scranton, Pennsylvania, in Lackawanna County. Memorial can be reached from the intersection of Mulberry Street and Nay Aug Road. Park at the Brooks Mine and walk to the path just past “Pioneer” (the gravity car exhibit) and turn right on the foot path. It is half way up the hill. You'll see the boulder in profile as you turn onto the path. Touch for map. Marker is at or near this postal address: 1901 Mulberry St, Scranton PA 18510, United States of America. Touch for directions. 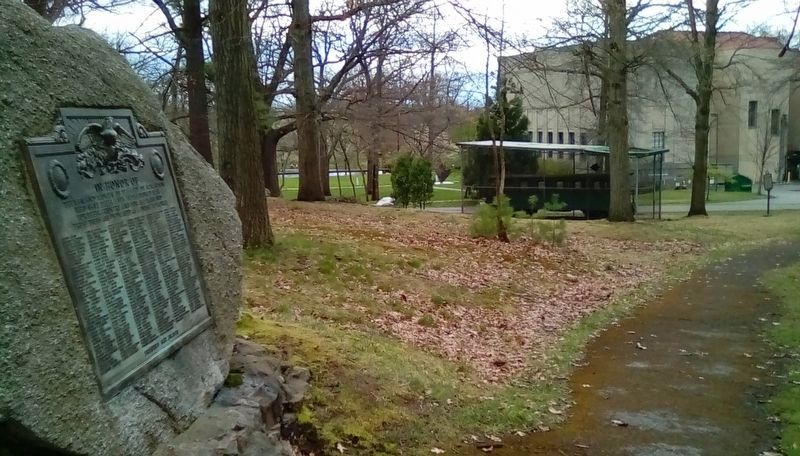 It was a year and six months from the end of the Great War. One Memorial Day had already passed, but in the interim a planning committee had gotten the idea for a World War I Memorial to be displayed in Nay Aug Park.

The committee decided to use a large natural boulder of conglomerate rock weighing several tons as the holder for the bronze plate. It was placed in a newly planted oak grove halfway between Lake Lincoln and the Gravity Railroad car. A list of the men and women from Scranton who had died during WWI was published in the paper. Readers were asked to check the names and add information that would help the committee 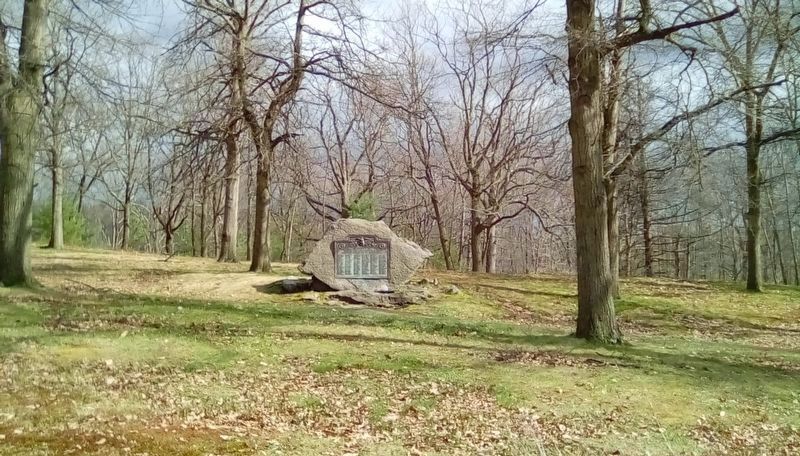 Photographed By Janice M. Gavern, May 1, 2020
3. World War Memorial and Oak Grove, Scranton Pa.
identify everyone who should be included. They also requested contact information for next of kin so they could be invited to the ceremony.

Rupert W. Thomas, Chairman of the Tablet, went to New York to pick up the bronze tablet during the week of May 22. That would give them time to fasten the tablet to the large boulder. The bronze tablet or plate was designed with an American eagle in relief at the top. On either side, wreaths enclosed two dates, 1917 on one side, 1919 on the other. The dedication read: “In honor of the men and women of the city of Scranton who gave their lives in the world war for their country and for all mankind. These trees are dedicated as a living memorial.” Below the dedication is the alphabetical list of the 242 men and six women from Scranton who gave their lives.

A platform was built adjacent to the boulder to seat the speakers. The boulder was covered and would be unveiled at the ceremony.

On the afternoon of the ceremony, community singing was organized before the event. Seventy five uniformed American Legion 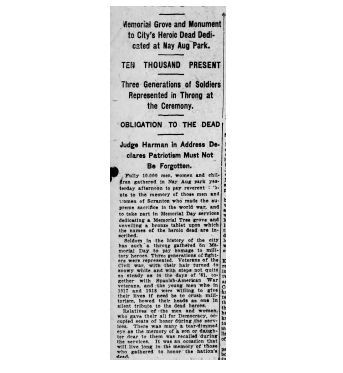 Three Generations of Soldiers Represented in Throng at the Ceremony.

OBLIGATION TO THE DEAD

Judge Harman in Address Declares Patriotism Must Not Be Forgotten.

Fully 10,000 men, women and children gathered in Nay Aug Park yesterday afternoon to pay reverent tribute to the memory of those men and women of Scranton who made the supreme sacrifice in the world war, and to take part in Memorial Day services dedicating a Memorial Tree grove and unveiling a bronze tablet upon which the names of the heroic dead are inscribed.

Seldom in the history of the city has such a throng gathered on Memorial Day to pay homage to military heroes. Three generations of fighters were represented. Veterans of the Civil War, with their hair turned to snowy white and which steps not quite so steady as in the days of ’61, together with Spanish-American War veterans, and the young men who in 1917 and 1918 were willing to give their lives if need be to crush militarism, bowed their heads as one in silent tribute to the dead heroes.

Relatives of the men and women, who gave their all for Democracy, occupied seats of honor during the services. There was many a tear=dimmed eye as the memory of a son or daughter dear to them was recalled during the services. It was an occasion that will live long in the memory of those who gathered to honor the nation’s dead.
members and several hundred in civilian clothes assembled at the intersection of Arthur Avenue and Linden Street and marched to the dedication site. Spanish American War veterans assembled at Linden Street and Penn Avenue and also marched to the site.

At the site, families of the deceased were given a white silk badge with a gold star and the date and purpose, and directed to special seating. Red Cross workers distributed programs and Boy Scouts acted as ushers. The dedication ceremony started promptly at 4:00 PM.

The Scranton Republican newspaper estimated that 10,000 people attended. The paper also reported that in addition to veterans of WWI, veterans of the Civil War and the Spanish American War were also present.

The picture in the paper [Image 6 on this page] shows a group of Red Cross nurses in traditional white uniforms with headdresses that displayed a red cross. Miss Helen Miskell, who had lost two brothers to the war, was garbed as Columbia. Little Miss Mildred Perry, whose father had died in the War, was dressed in a miniature Red Cross nurse costume. She would be the one who unveiled the memorial. Also in the picture were the distinguished speakers, including Mayor Alex T. Connell, Chaplains W. J. Gibson of the 25th Engineers in France, Frederick Houghton, Rear Admiral A. M. Knight, Col David J. Davies and Hon. John G. Harmon. 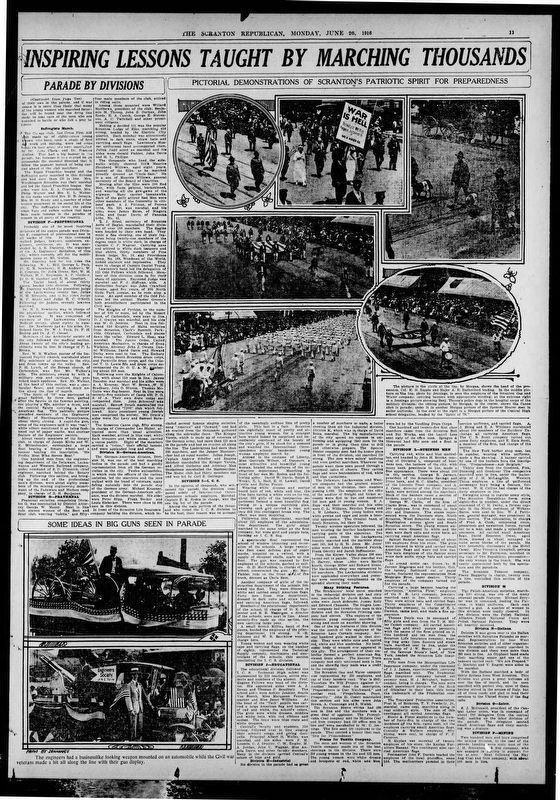 From the Scranton Republican, July 26, 1916
5. Inspiring Lessons Taught by Marching Thousands
Click on image to zoom in to read.
and “Onward Christian Soldiers” started the program, followed by Chaplin Gibson's opening prayer. Col David J. Davis made introductory remarks. Admiral Austin M. Knight paid a glowing tribute to the part women had played, saying they brought home tenderness and home comfort into the hospitals and on the field, with no compulsion beyond the urging of their own hearts. He reported five women’s names were inscribed on the tablet. He was partially correct. Five women nurses were listed: Misses Mae E Carter, Theresa Collins, Anna P. Gibney, Lillian M. Langdon and Romaine Lewis.

There was a sixth woman listed: Miss Eugenia Hosie. Her family was involved in Red Cross work. Miss Hosie wanted to help, but was not trained. She and a friend were employed as canteen workers by the YMCA, and she died of Spanish Influenza shortly after getting to France. She was buried in England.

The main speaker was Hon. John G. Harmon. Judge Harmon warned that we must not forget our war patriotism in peace. Bolshevism has reared its head. Some of his words speak to our current situation, and he was speaking 100 years ago. He said, “Race riots have broken out. Strikes have throttled industry. Open lawlessness is worst of all, and all these things confront us. Does that sound familiar? What are we to do?” He recommended we "stick to our ancient moorings". He concluded 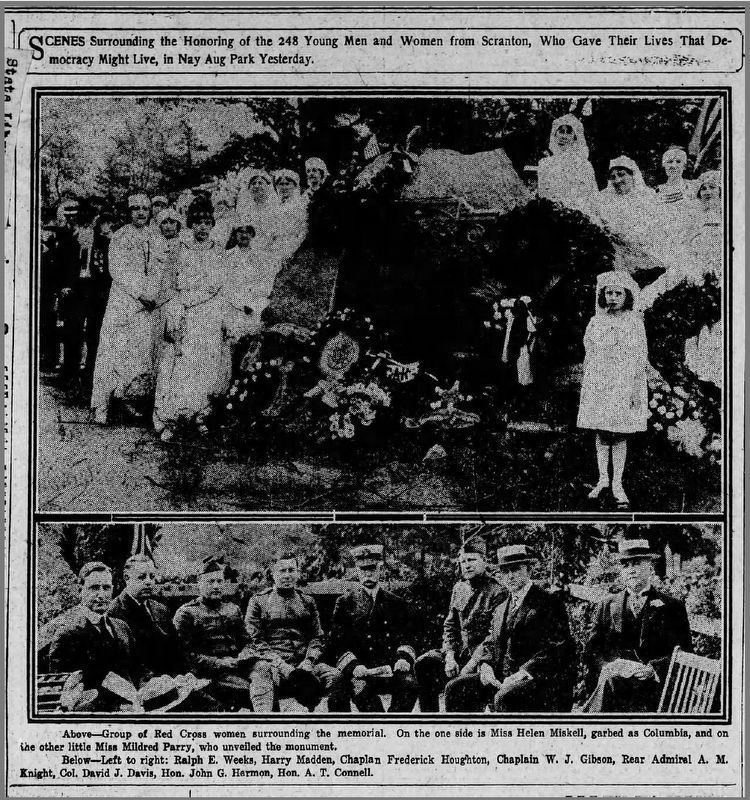 From The Tribune, Scranton, Pennsylvania, May 31, 1920
6. Scenes Surrounding the Honoring of the 248 Young Men and Women in Nay Aug Park Yesterday
Above—Group of Red Cross women surrounding the memorial. On the one side is Miss Helen Miskell, garbed as Columbia, and on the other little Miss Mildred Parry, who unveiled the monument.
Below—Left to right: Ralph E. Weeks, Harry Madden, Chaplian Frederick Houghton, Chaplain W. J. Gibson, Read Admiral A. M. Knight, Colonel David J. Davis, Honorable John G. Harmon, Honorable A. T. Connell.
The poor quality of the photographs is due to this image being taken from a microfiche copy of the newspaper page rather than the page itself.
that this was a time for the exercise of good, hard, common sense. A more extensive description of his speech is in the article included in the May 31, 1920 edition of the Scranton Republican.

After singing “Nearer My God to Thee” with the crowd, Chaplin Houghton concluded the ceremony with a closing prayer.

The simple, elegant World War I Memorial is still displayed in the memorial grove. Take a walk in the park and stop to reflect on our fallen WWI brothers and sisters.

This Memorial Day, my comrade, 11th District American Legion Commander Gerry Heid, and I conducted a small remembrance ceremony in honor of the 100th anniversary of the dedication of the memorial. Some of our pictures are on the PA Homepage. Although it isn’t the same as 10,000 live bodies, our ceremony will be posted online to show that we still remember.

The author of this article, Janice Gavern, is originally from South Scranton and is a graduate of South Scranton Central Catholic High School. Ms. Gavern earned a BS in Psychology with emphasis on Engineering from Wright State University, Dayton, OH, and an MS in Military Logistics Management, Air Force Institute of Technology, Wright Patterson AFB, OH. She is the current Vice Chair of the Women Veterans Committee, American Legion, Department of Pennsylvania. 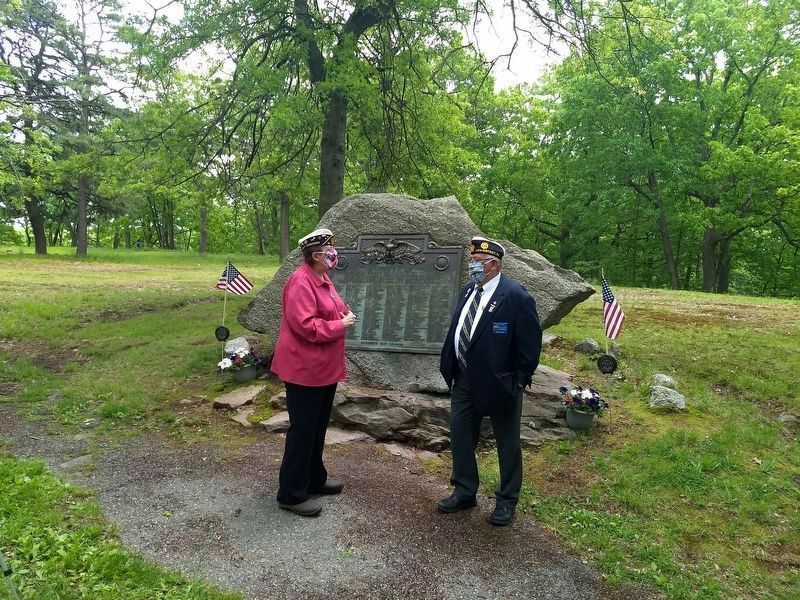