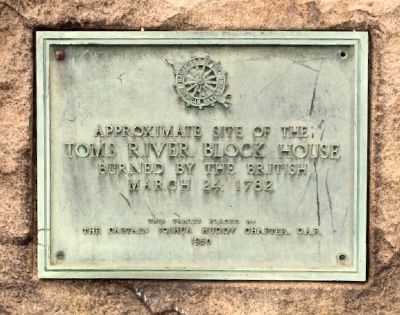 Approximate site of the Toms River Block House. Burned by the British March 24, 1782.

Erected 1950 by The Captain Joshua Huddy Chapter, Daughters of the American Revolution.

Topics and series. This historical marker is listed in these topic lists: Notable Events • War, US Revolutionary. In addition, it is included in the Daughters of the American Revolution (DAR) series list. A significant historical date for this entry is March 24, 1862. 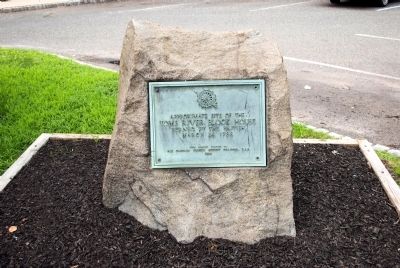 Regarding Toms River Block House. The hanging of Captain Joshua Huddy caused an international incident during the war.

According to Nicholas F. Rakoncza in Toms River was in Flames: The Toms River Blockhouse Fight and William H. Fischer (for whom Toms River's Fischer Boulevard is named), in The Toms River Block House Fight, the 10 patriots who lost their lives as a result of the attack were:
Major John Cook, 2nd Regiment Monmouth Militia and a Toms River resident
Captain Joshua Huddy who was unlawfully hanged on April 12, 1782
Captain Ephriam Jenkins, stationed in Toms River, but not assigned to Blockhouse
Matross Daniel Dodge
Matross John Farr
Matross James Kennedy
Matross James Kinsley (or Kinsey)
Matross Cornelius McDonald
Matross Thomas Rostoinder
Matross John Wainwright.
A Matross was a gunner or gunner's mate. 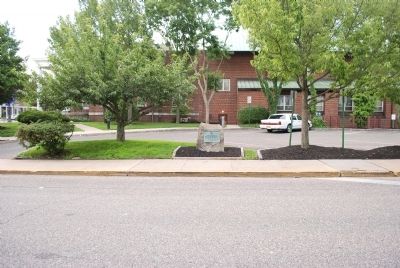 Photographed By R. C.
3. Toms River Block House Marker
View from across the street.
Click here for a list of markers that are related to this marker. Capt. Huddy, a Captain in the NJ militia and in command at Toms River, escaped capture at the battle but was later captured. His home is nearby.

Also see . . .
1. Toms River Blockhouse Fight. Short article about, but with an inaccurate of, the Toms River Block House fight. (Submitted on February 3, 2009, by Kevin W. of Stafford, Virginia.)

2. The Capture of the Block House at Toms River, New Jersey, March 24, 1782:. Read at the Memorial Service at Toms River, May 30, 1888
This book, by William Scudder Stryker was published by Naar, Day & Naar, book and job printers in 1888. The original is located at Princeton University. (Submitted on February 3, 2009, by Kevin W. of Stafford, Virginia.) 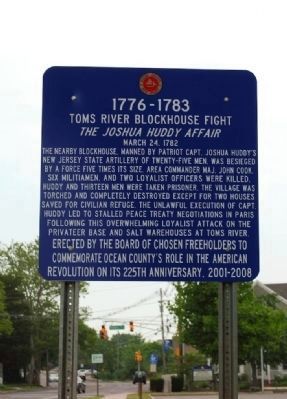 Photographed By R. C.
4. Block House Sign (note the use of "blockhouse" and not "block house")
1776-1783
Toms River Blockhouse Fight
The Joshua huddy Affair
March 24, 1782
The nearby blockhouse, manned by Patriot Capt. Joshua Huddy's New Jersey State Artillery of twenty-five men, was besieged by a force five times its size. Area commander Maj. John Cook, six militiamen, and two loyalist officers were killed. Huddy and thirteen men were taken prisoner. The village was torched and completely destroyed except for two houses saved for civilian refuge. The unlawful execution of Capt. Huddy led to stalled peace treaty negotiations in Paris following this overwhelming loyalist attack on the privateer base and salt warehouses at Toms River.

Erected by the Board of Chosen Freeholders to commemorate Ocean County's role in The American Revolution on its 225th anniversary, 2001-2008. 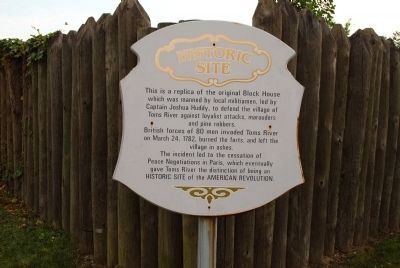 "This is a replica of the original Block House which was manned by local militiamen, led by Captain Joshua Huddy, to defend the village of Toms River against loyalist attacks, marauders, and pine robbers.

British forces of 80 men invaded Toms River on March 24, 1782, burned the forts, and left the village in ashes.

The incident led to the cessation of Peace Negotiations in Paris, which eventually gave Toms River the distinction of being an historic site of the American Revolution. 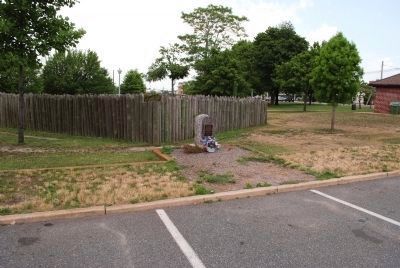 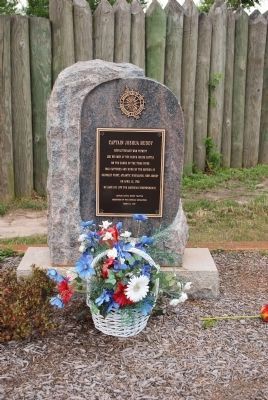 Photographed By R. C.
7. Joshua Huddy Memorial Plaque
There is a memorial plaque nearby the original site marker that is dedicated to Captain Joshua Huddy. It reads:
Captain Joshua Huddy, Revolutionary War Patriot, led his men at the Block House Battle on the banks of Toms River, was captured and hung by the British at Graveley Point, Atlantic Highlands, New Jersey on April 12, 1782.
He gave his life for American Independence
Captain Joshua Huddy Chapter of The Daughters of the American Revolution, March 24, 2007. 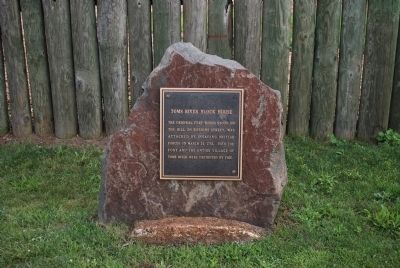