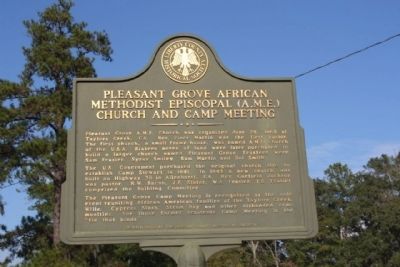 Topics and series. This historical marker is listed in these topic lists: African Americans • Churches & Religion 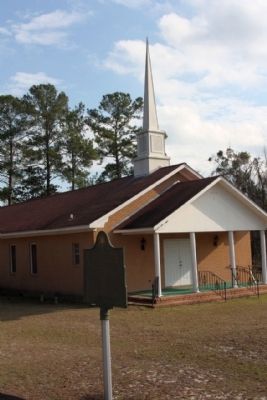 Click or scan to see
this page online
• Notable Places. In addition, it is included in the African Methodist Episcopal (AME) Church series list. A significant historical date for this entry is June 29, 1898.

Regarding Pleasant Grove African Methodist Episcopal (AME) Church and Camp Meeting. "In 1869, the Pleasant Grove A.M.E. Church was founded at Taylors Creek by local preacher Rev. Piner Martin. Next to the church laid the Pleasant GroveCemetery. The cemetery included a Masonic Lodge for the African American community, and a parsonage for the pastor. A one-room school, 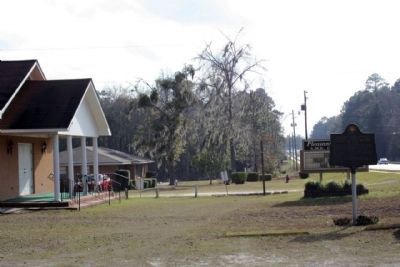 Photographed By Mike Stroud, 2009
3. Pleasant Grove Marker, looking south , along W. Oglethorpe Hwy(US 84,GA 38)
which later became a part of the Liberty County School system,stood nearby as well. Population and economic growth continued in Taylors Creek during the first 20 years of the 20th Century. African Americans madeup slightly more than half the town’s population of 325. Crop destruction caused by the boll weevil ended Taylors Creek’s boom. The village didn’t have a railroad connection, which also contributed to the end of the boom."
("The Frontline" newspaper,Fort Stewart, October 23, 2003 )
Credits. This page was last revised on June 16, 2016. It was originally submitted on January 29, 2009, by Mike Stroud of Bluffton, South Carolina. This page has been viewed 1,879 times since then and 39 times this year. Photos:   1, 2, 3. submitted on January 29, 2009, by Mike Stroud of Bluffton, South Carolina. • Craig Swain was the editor who published this page.
Share this page.