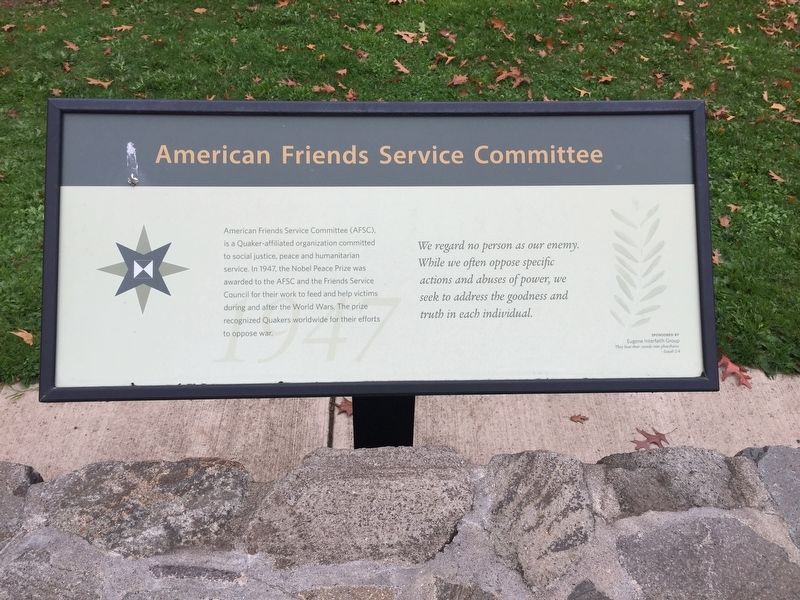 We regard no person as our enemy. While we often oppose specific actions and abuses of power, we seek to address the goodness and truth in each individual. . This historical marker was erected in 2013 by Nobel Peace Laureate Project. It is in Eugene in Lane County Oregon

American Friends Service Committee (AFSC), is a Quaker-affiliated organization committed to social justice, peace and humanitarian service. In 1947, the Nobel Peace Prize was awarded to the AFSC and the Friends Service Council for their work to feed and help victims during and after the World Wars. The prize recognized Quakers worldwide for their efforts to oppose war.

We regard no person as our enemy. While we often oppose specific actions and abuses of power, we seek to address the goodness and truth in each individual.

Topics. This historical marker is listed in these topic lists: Charity & Public Work • Churches & Religion • Peace. A significant historical year for this entry is 1947. 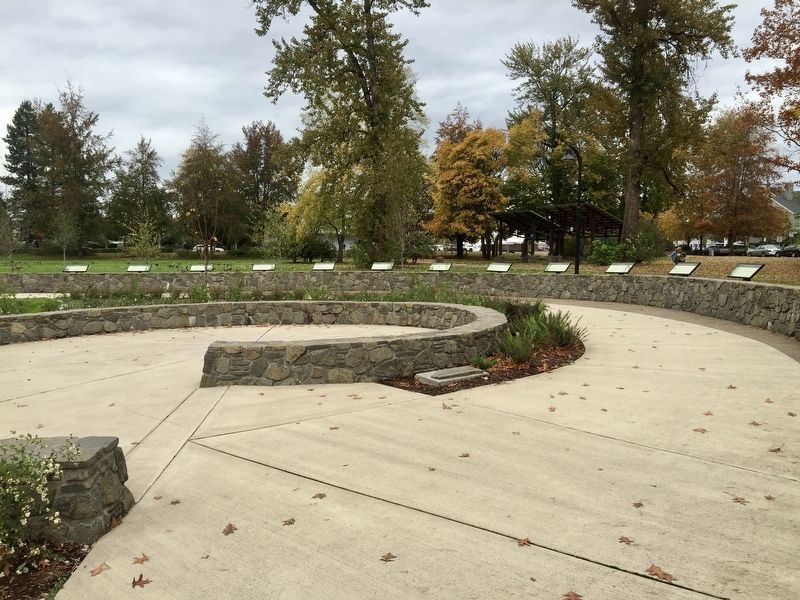 Photographed By Andrew Ruppenstein, October 26, 2016
2. American Friends Service Committee (1947) Marker - wide view
The marker is visible here as the secondmost from the right.

More about this marker. The marker is located within the Nobel Peace Park, which is situated within Alton Baker Park, between the Defazio Bridge and Day Island Road.

Also see . . .  American Friends Service Committee (Wikipedia). "The American Friends Service Committee (AFSC) is a Religious Society of Friends (Quaker) founded organization working for peace and social justice in the United States and around the world. AFSC was founded in 1917 as a combined effort by American members of the Religious Society of Friends to assist civilian victims of World War I. It continued to engage in relief action in Europe and the Soviet Union after the Armistice of 1918. By the mid-1920s it focused on improving racial relations in the U.S., as well as exploring ways to prevent the outbreak of another conflict before and after World War II. As the Cold War developed, it moved to employ more professionals rather than Quaker volunteers, over time attempting to broaden its appeal and respond more forcefully to racial injustice, women's issues, and demands of sexual minorities for equal treatment." (Submitted on October 7, 2020.)
Credits. This page was last revised on October 7, 2020. It was originally submitted on October 7, 2020, by Andrew Ruppenstein of Sacramento, California. This page has been viewed 93 times since then and 14 times this year. Photos:   1, 2. submitted on October 7, 2020, by Andrew Ruppenstein of Sacramento, California.
Share this page.