International Physicians for the Prevention of Nuclear War (1985) 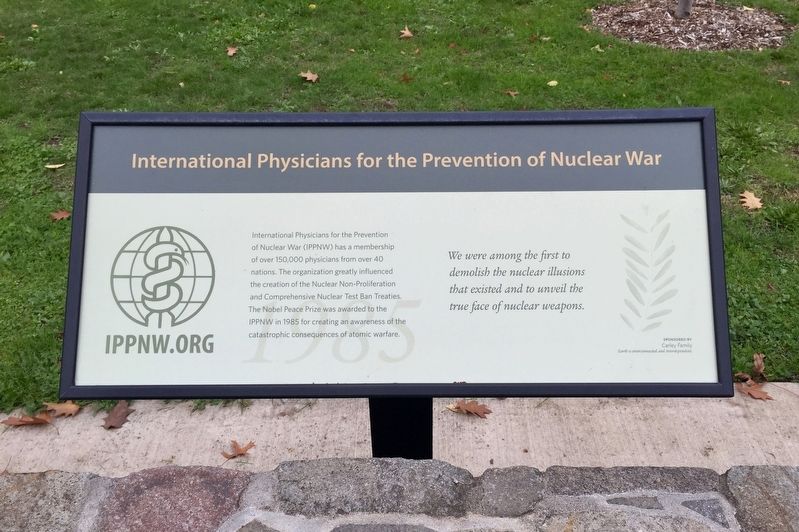 We were among the first to demolish the nuclear illusions that existed and to unveil the true face of nuclear weapons. , . This historical marker was erected in 2013 by Nobel Peace Laureate Project. It is in Eugene in Lane County Oregon

International Physicians for the Prevention of Nuclear War (IPPNW) has a membership of over 150,000 physicians from over 40 nations. The organization greatly influenced the creation of the Nuclear Non-Proliferation and Comprehensive Nuclear Test Ban Treaties. The Nobel Peace Prize was awarded to the IPPNW in 1985 for creating an awareness of the catastrophic consequences of atomic warfare.

We were among the first to demolish the nuclear illusions that existed and to unveil the true face of nuclear weapons.

Topics. This historical marker is listed in this topic list: Peace.

Location. 44° 3.444′ N, 123° 4.891′ W. Marker is in Eugene, Oregon, in Lane County. Marker can be reached from Day Island Road. The marker is located within the Nobel Peace Park, which is situated within Alton Baker Park, between the Defazio Bridge and Day Island Road. Touch for map. Marker is in this post office area: Eugene OR 97401, United States of America. Touch for directions.

Other nearby markers. At least 8 other markers are within walking distance of this marker. Cordell Hull (1945) (here, next to this marker); Nicolas Murray Butler (1931) 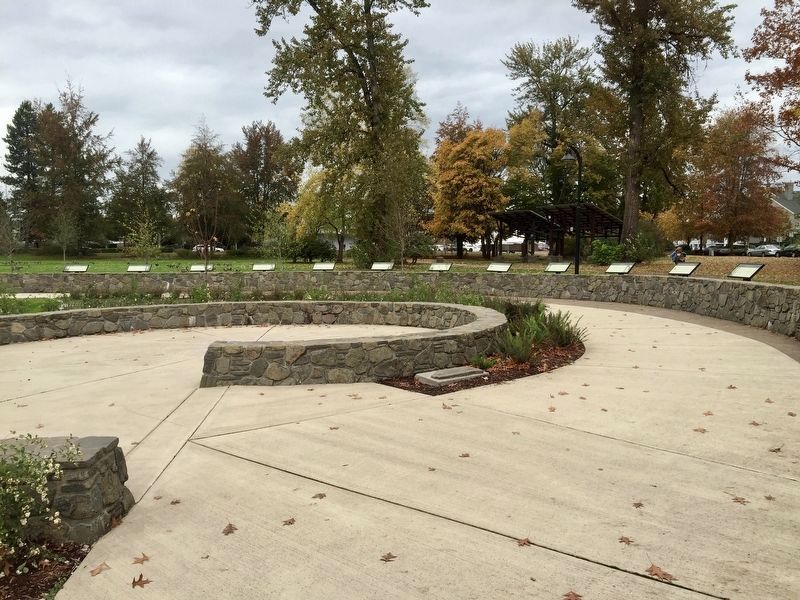 Photographed By Andrew Ruppenstein, October 26, 2016
2. International Physicians for the Prevention of Nuclear War (1985) Marker - wide view
The IPPNW marker is the fifth from the left.

Also see . . .  International Physicians for the Prevention of Nuclear War (IPPNW) (NobelPrize.org). "IPPNW was only five years old when the organization received the Nobel Peace Prize. The heart specialists Bernhard Lown from the United States and Evgeny Chazov from the Soviet Union had become acquainted in the 1960s, and both were concerned about the medical aspects of a nuclear war. Despite belonging to opposing camps during the Cold War, they agreed to found an international organization for physicians that would seek to counteract the nuclear arms race. .... And the physicians of the world proved enthusiastic. In 1985 the organization had 135,000 members in 40 countries, including 28,000 in the USA and 60,000 in the Soviet Union." (Submitted on October 7, 2020.)
Credits. This page was last revised on October 7, 2020. It was originally submitted on October 7, 2020, by Andrew Ruppenstein of Sacramento, California. This page has been viewed 51 times since then and 8 times this year. Photos:   1, 2. submitted on October 7, 2020, by Andrew Ruppenstein of Sacramento, California.
Share this page.