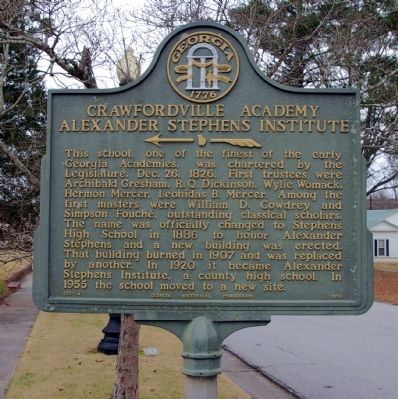 This school, one of the finest of the early Georgia Academies, was chartered by the Legislature, Dec. 26, 1826. First trustees were Archibald Gresham, R. Q. Dickinson, Wylie Womack, Hermon Mercer, Leonidas B. Mercer. Among the first masters were William D. Cowdrey and Simpson Fouche, outstanding classical scholars. The name was officially changed to Stephens High School in 1886 to honor Alexander Stephens and a new building was erected. That building burned in 1907 and was replaced by another. In 1920 it became Alexander Stephens Institute, a county high school. In 1955 the school moved to a new site.

Topics and series. This historical marker is listed in this topic list: Education. In addition, it is included in the Georgia Historical Society series list. A significant historical date for this entry is December 26, 1911. 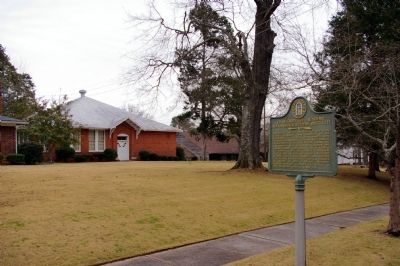 Click or scan to see
this page online
north. Touch for map. Marker is at or near this postal address: 120 Memorial Drive, Crawfordville GA 30631, United States of America. Touch for directions.