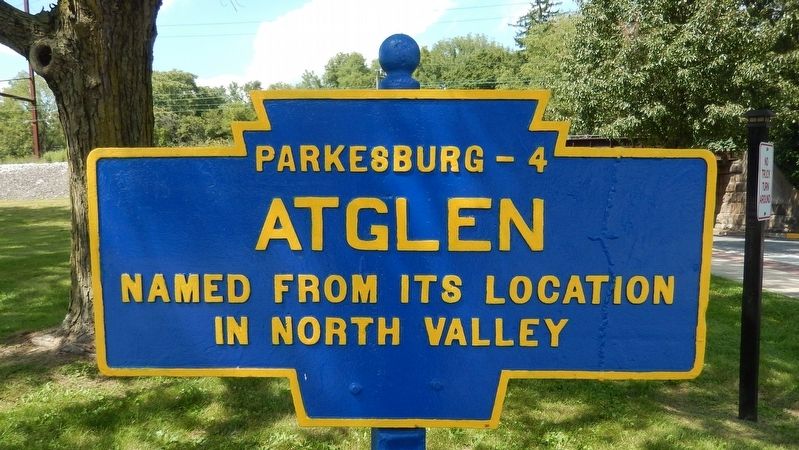 Parkesburg – 4
Atglen
Named from its location
in North Valley

Location. 39° 56.988′ N, 75° 58.424′ W. Marker is in Atglen, Pennsylvania, in Chester County. Marker is on Main Street north of Valley Avenue (Pennsylvania Route 372), on the left when traveling north. Marker is located on the grounds of the Atglen Borough Hall, near the northeast corner of the parking lot. Touch for map. Marker is at or near this postal address: 120 Main Street, Atglen PA 19310, United States of America. Touch for directions.

Other nearby markers. At least 8 other markers are within 3 miles of this marker, measured as the crow flies. Atglen Borough Hall (within shouting distance of this marker); World War II (about 700 feet away, measured in a direct line); East Octoraro #1 Bridge (1910-2020) (approx. one mile away); Philadelphia & Columbia Railroad Bridge at Pine Creek, Circa 1830 (approx. 1.1 miles away); Christiana Riot Monument (approx. 1.2 miles away); Mercer’s Mill Covered Bridge (1880) 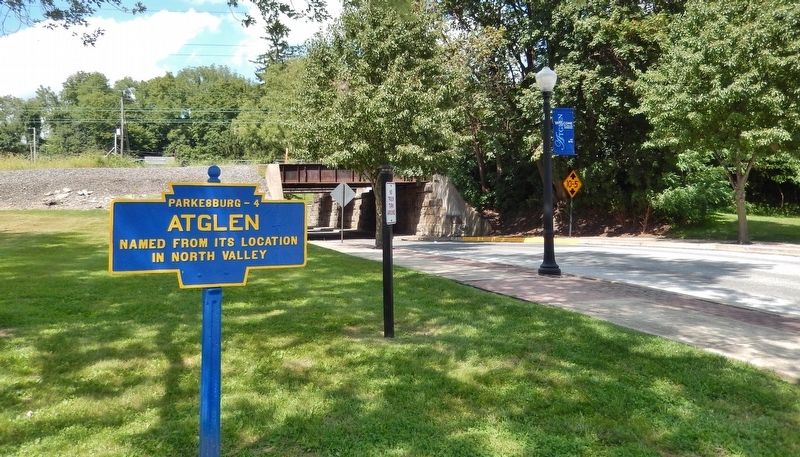 Also see . . .  History of Atglen Borough: How it all started. On January 3, 1876, the Court in West Chester made a decree incorporating the vil!age of Penningtonville into a borough by the title of "the Borough of Atglen." The first election of officers was to be held on the third Tuesday of February, 1876. Businesses in the borough included Futhey and Wilson's general store. John A. Reynolds had a grocery and provisions store on East Main Street. Benjamin Franklin Tillum had a drug store and post office, presently Vera Bair's Atglen Restaurant and Bar. John Myers was a stone mason. Charles Reese was a coachmaker. Ellis Good was a restaurant keeper. William McConna owned the North Bend warehouse. Isaac P. Chalfant was in charge of manufacturing sad irons at Greenwood Forge. R. C. Cowan had a saddle and leather shop where Eberly's Auto Sales is at present. (Submitted on August 31, 2018, by Cosmos Mariner of Cape Canaveral, Florida.) 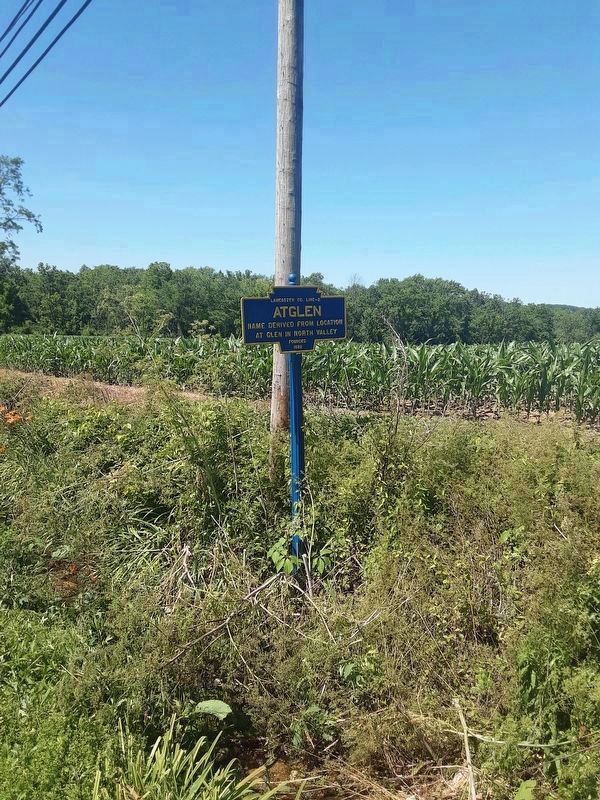 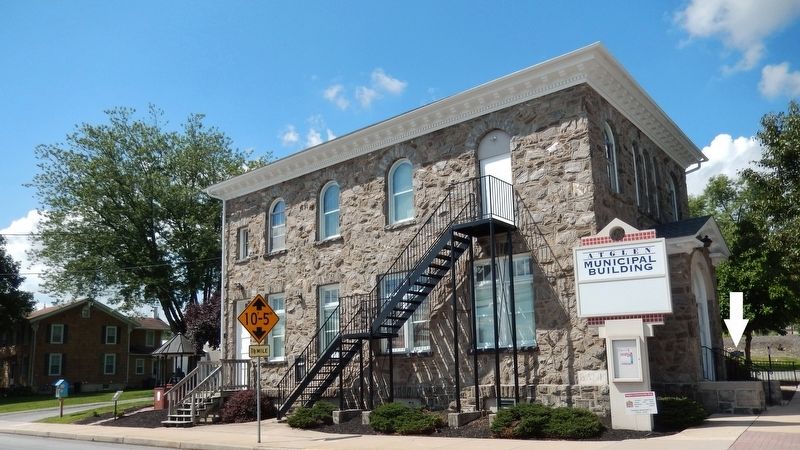 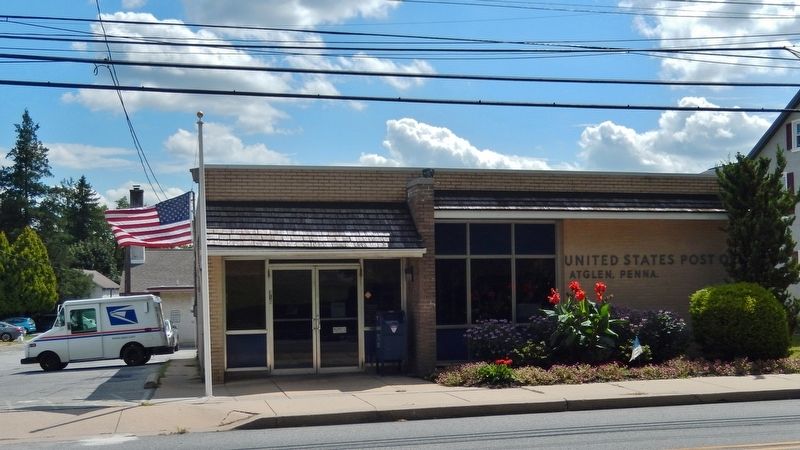 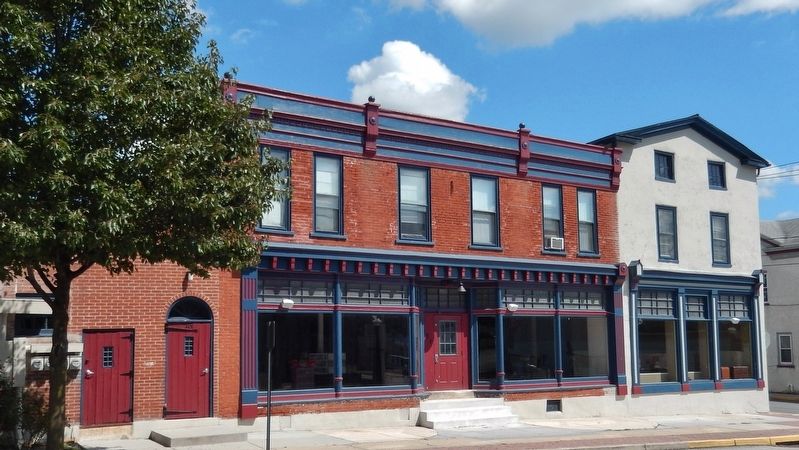 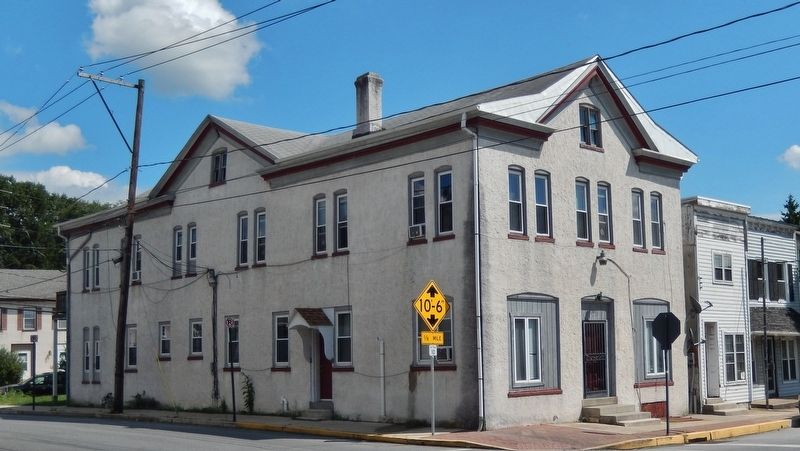