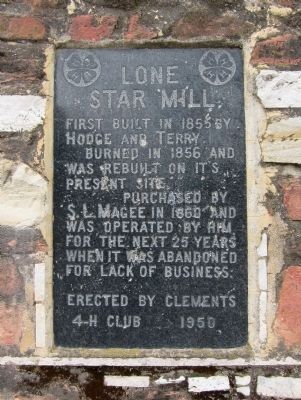 Photographed By Andrew Ruppenstein, April 2, 2011
1. Lone Star Mill Marker
Inscription.
Lone Star Mill. . First built in 1855 by Hodge and Terry., Burned in 1856 and was rebuilt on it's present site. , Purchased by S.L. Magee and was operated by him for the next 25 years when it was abandoned for lack of business., Erected by Clements 4-H Club 1950 , . This historical marker was erected in 1950 by Clements 4-H Club. It is in Clements in San Joaquin County California

Burned in 1856 and was rebuilt on it's present site.

Purchased by S.L. Magee and was operated by him for the next 25 years when it was abandoned for lack of business.

Topics and series. This historical marker is listed in this topic list: Industry & Commerce. In addition, it is included in the California Historical Landmarks series list. A significant historical year for this entry is 1855.

Location. 38° 12.242′ N, 121° 5.52′ W. Marker is in Clements, California, in San Joaquin County. Marker is on North Mackville Road, one mile north of California Highway 88, on the left when traveling north. The marker can be found in front of Stillman Magee Park. Touch for map. Marker is in this post office area: Clements CA 95227, United States of America. Touch for directions.

Other nearby markers. At least 8 other markers are within 5 miles of this marker, measured as the crow flies. Mackville Road Bridge (about 700 feet away, measured in a direct line); Glenview Cemetery (approx. 0.2 miles away); James B. Anderson (approx. 0.2 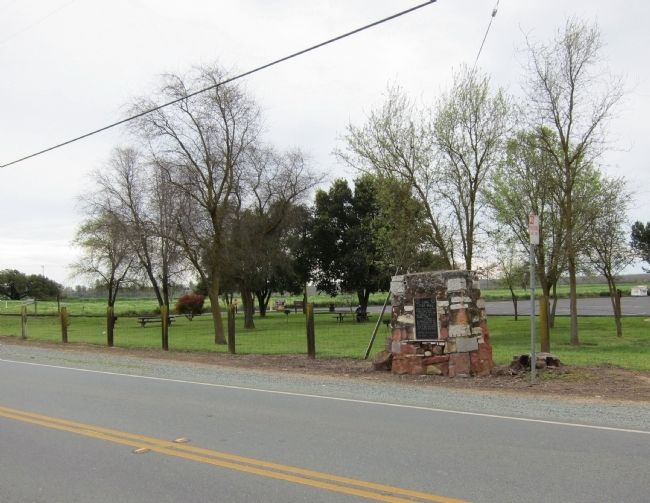 Regarding Lone Star Mill. This is California Historical Landmark Number 155.

A sawmill was moved to this site by Hodge and (David S.) Terry, and named the Lone Star Mill, as Terry had been raised in Texas. A flour mill was added in 1855. The mill burned down in 1856 and subsequently rebuilt at the same site. Terry was a justice on the California Supreme Court from 1855-1859, but perhaps best remembered for having killed Senator David Broderick in a duel in 1859.

Related marker. Click here for another marker that is related to this marker. A marker in Daly City, California which commemorates the Broderick-Terry Duel of September 13, 1859.