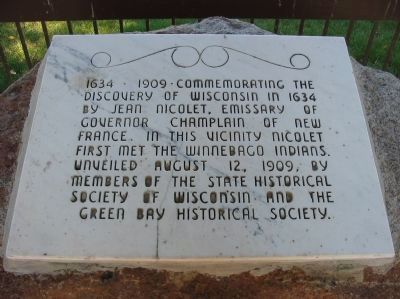 Commemorating the discovery of Wisconsin in 1634 by Jean Nicolet, emissary of Governor Champlain of New France. In this vicinity Nicolet first met the Winnebago Indians.

Topics. This historical marker is listed in this topic list: Exploration. A significant historical year for this entry is 1634.

Location. 44° 36.557′ N, 87° 51.975′ W. Marker is near Green Bay, Wisconsin, in Brown County. Marker can be reached from Benderville Road, 0.2 miles north of Nicolet Drive (County Highway A), on the left when traveling north. Marker is at Red Banks (near Benderville) at Nicolet Landing. Touch for map. Marker is in this post office area: Green Bay WI 54311, United States of America. Touch for directions.

Other nearby markers. At least 8 other markers are within 3 miles of this marker, measured as the crow flies. Nicolet Landing (about 300 feet away, measured in a direct line); Red Banks (approx. 2.8 miles away); The Beaudhuin Village Site: A North Bay Middle Woodland Camp 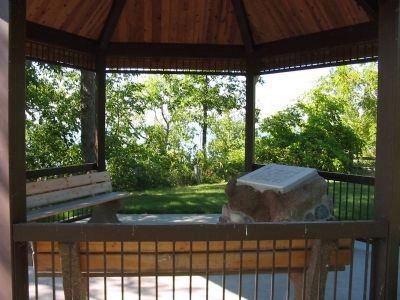 More about this marker. This is a Wisconsin Registered Landmark – Number 11.

Also see . . .  Jean Nicolet. "Born around 1598 in Cherbourg, Normandy, France, son of Thomas Nicollet (spelled with either one "l" or two), who was "messenger ordinary of the King between Paris and Cherbourg", and Marguerite de la Mer." (Submitted on February 2, 2009.) 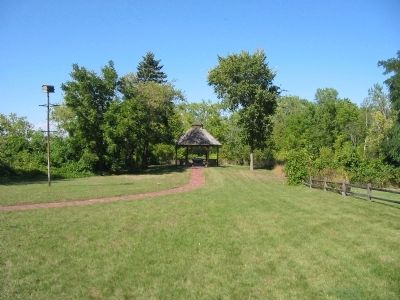 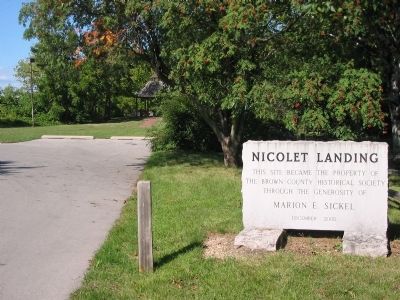