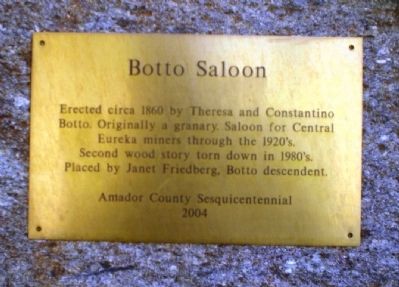 By Andrew Ruppenstein, January 31, 2009
1. Botto Saloon Marker
Inscription.
Botto Saloon. . Erected circa 1860 by Theresa and Constantino Botto. Originally a Granary. Saloon for Central Eureka Miners Through the 1920’s. Second Wood Story Torn Down in the 1980’s. Placed by Janet Friedberg, Botto Descendent., Amador County Sesquicentennial , 2004 . This historical marker was erected in 2004 by Janet Friedberg. It is in Sutter Creek in Amador County California

Erected circa 1860 by Theresa and Constantino Botto. Originally a Granary. Saloon for Central Eureka Miners Through the 1920’s. Second Wood Story Torn Down in the 1980’s. Placed by Janet Friedberg, Botto Descendent.

Topics. This historical marker is listed in these topic lists: Industry & Commerce • Notable Buildings. A significant historical year for this entry is 1860.

Other nearby markers. At least 8 other markers are within walking distance of this marker. Central Eureka Mine (a few steps from this marker); 1854 · Amador County · 1954 (about 400 feet away, measured in a direct line); Old Eureka Mine (approx. half a mile away); Knight Scarifier – “The Scarifier that will scarify” (approx. half a mile away); Miners' Bend Park 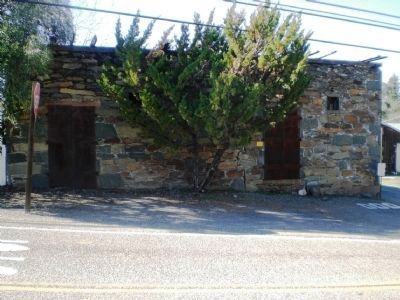 More about this marker. The marker is on the left-hand side of the right-hand door. The saloon is on private property.

Regarding Botto Saloon. This 1860's structure is similar in style and craft to other stone buildings built by Gold Rush-era Italian immigrants in the area, as can be seen in nearby Sutter Creek (the Soracco Store) and Jackson (Butte Store).

Some of the remains of the wooden superstructure, as mentioned on the marker, can be seen in the photo of the saloon. The wooden parts of similar gold rush era buildings, being generally less durable than stone (and flammable, too), have tended not to survive as well as the stone-built sections.