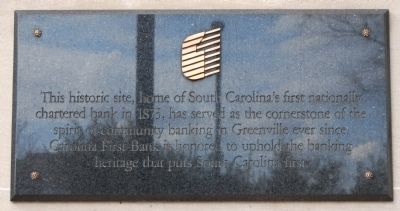 This historic site, home of South Carolina's first nationally charted bank in 1873, has served as the cornerstone of the spirit of community banking in Greenville ever since. Carolina First Bank is honored to uphold the banking heritage that puts South Carolina first. 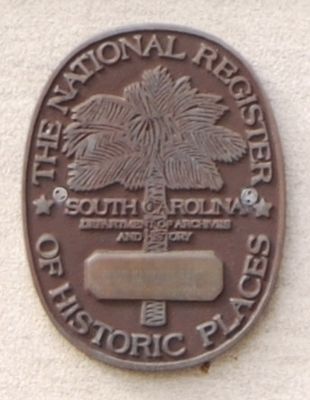 Additional comments.
1. First National Bank
The First National Bank Building is located at the corner of Main and McBee Streets. This Art-Deco two-and-a-half-story structure sheathed in sandstone with a polished black granite door frame and base was designed by Atlanta architect S.L. Trowbridge in 1938.

The flat-roofed building has a geometric-patterned cornice and a frieze band. Stylized 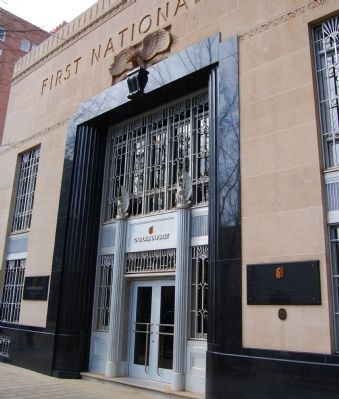 By Brian Scott, February 2, 2009
3. South Carolina's First National
Bank Facade and Marker
sunburst aluminum grill works covers the transom and sidelights of the main entrance and its flanking windows. Fluted aluminum pilasters topped with stylized aluminum eagles frame the main double doors leading into the bank. "First National Bank" is deeply carved across the central section of the upper facade, over a high-relief eagle with out-stretched wings set within a sandstone niche immediately above the stylized granite keystone.

The 1938 building was enlarged in 1952 by extending the sandstone and polished granite facade around the adjacent 1917 building. The sympathetic and careful extension used the same building materials as the earlier one, duplicating the cornice and friezes with a side door enframed by black granite. A palmetto tree and the date 1952 were carved in the sandstone above the side door's stylized black granite keystone.

The 1938 banking hall had an alternating black and white marble tile floor, a gilded and carved plaster ceiling, shellacked walnut wainscoting, and elaborately carved four-foot wide pilasters on either side of the banking hall. Typically Art Deco stylized stepped wooden keystones were set above windows and tellers' counters. The 1952 interior expansion and renovation included duplicating the keystone motifs, adding an Art Deco-reminiscent clock to the McBee Avenue entrance, and painting the ceiling white in both buildings. 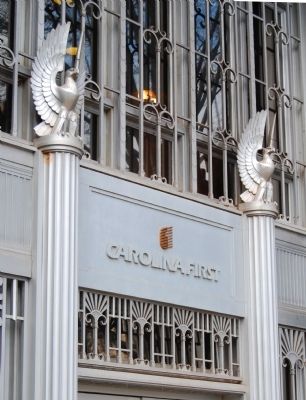 By Brian Scott, February 2, 2009
4. South Carolina's First National
Bank Entrance Detail
aside from signage, no significant changes have been made in the building's exterior. The interior has been modified, but many significant interior features remain or have been restored.

Significance
The First National Bank building is architecturally significant because it is Greenville's only major Art Deco commercial structure. Constructed in 1938, it was designed by Atlanta architect Silas L. Trowbridge, and built by Morris & McKoy, contractors. It is also important for its association with the old National Bank of Greenville, chartered in 1872, and the first national bank chartered in South Carolina.

Although several Greenville banks closed or had to be reorganized during the depression, the first National Bank maintained its place as Greenville's leading financial institution. In 1937-38, Beattie invested over $100,000 for the construction of a new building, also designed by Trowbridge. This new bank building utilized the existing foundation and walls of a nineteenth-century commercial building adjacent to the 1917 building. The earlier building was rented to a succession of tenants. When the 1938 building was expanded in the 1950s to include the 1917 bank, the Art Deco design of the 1938 building was extended to cover the exterior of the earlier building. (Source: National Register nomination form.) 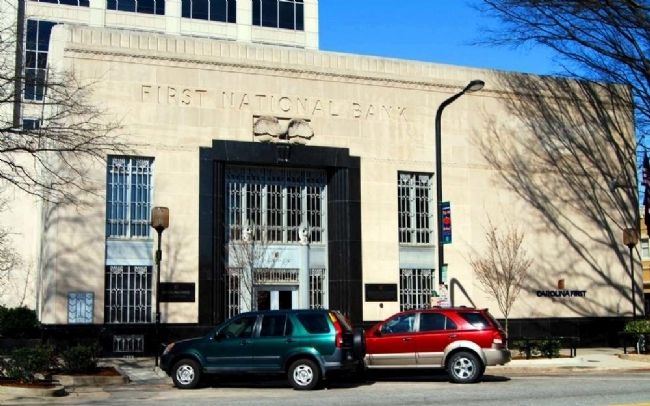 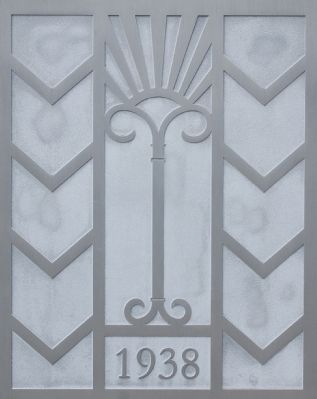