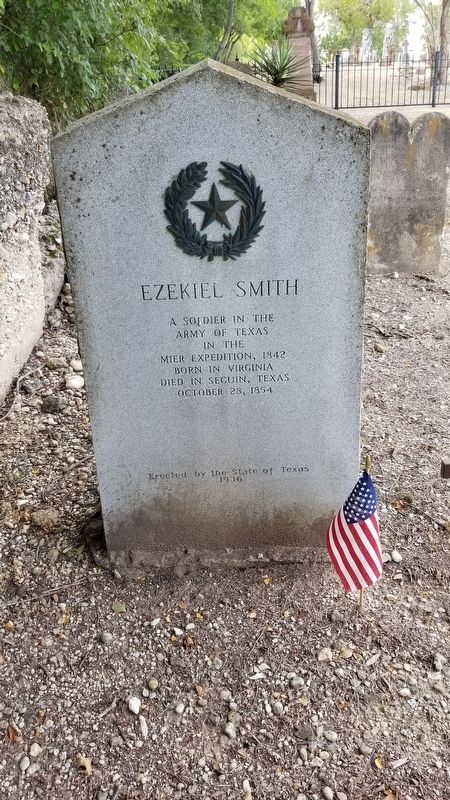 Photographed By James Hulse, July 31, 2020
1. Ezekiel Smith Marker
Inscription.
Ezekiel Smith. . , A soldier in the Army of Texas in the Mier expedition, 1842 , Born in Virginia , Died in Seguin, Texas , October 28, 1854 , Erected by the State of Texas 1936 . This historical marker was erected in 1936 by The State of Texas. It is in Seguin in Guadalupe County Texas

A soldier in the Army of Texas in the Mier expedition, 1842
Born in Virginia
Died in Seguin, Texas
October 28, 1854
Erected by the State of Texas 1936

Topics and series. This historical marker is listed in this topic list: War, Texas Independence. In addition, it is included in the Texas 1936 Centennial Markers and Monuments series list. A significant historical date for this entry is October 28, 1854.

Location. 29° 33.596′ N, 97° 57.706′ W. Marker is in Seguin, Texas, in Guadalupe County. Marker can be reached from the intersection of East Klein Street and South River Street. The Ezekiel Smith marker is located in the south section of the Riverside Cemetery in the section called Smith Cemetery, toward the back fence. Touch for map. Marker is in this post office area: Seguin TX 78155, United States of America. Touch for directions. 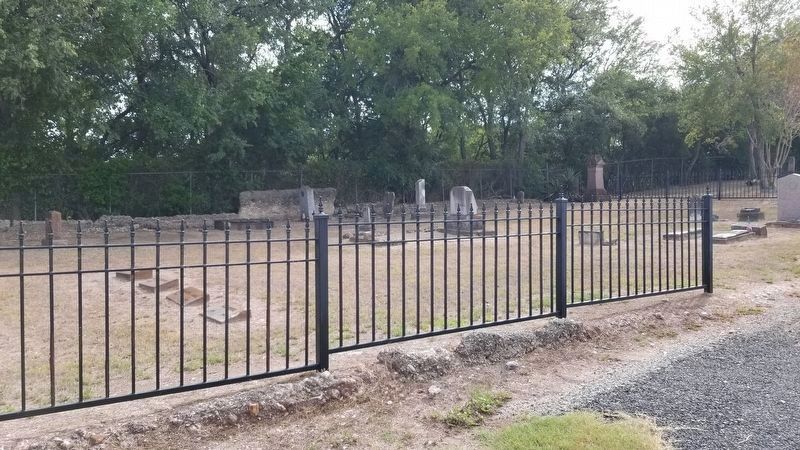 Photographed By James Hulse, July 31, 2020
2. Ezekiel Smith Marker
The marker is along the back fence by the trees.

Click or scan to see
this page online
(within shouting distance of this marker); John F. McGuffin (within shouting distance of this marker); Riverside Cemetery (about 600 feet away, measured in a direct line); Calaboose (approx. 0.4 miles away); Campbell Cabin (approx. 0.4 miles away). Touch for a list and map of all markers in Seguin.

Ezekial Smith was a private in Captain George W. Kemp's Company of Virginia militia. He was drafted at Giles County, Virginia Court House. The company was then under Captain George Ott. Later years in Texas, Smith participated in the Runaway Scrape and was the oldest man in the Mier Expedition, (1842-1843).
Source Seguin Gazette - January 21, 1981
Credits. This page was last revised on October 21, 2020. It was originally submitted on October 20, 2020, by James Hulse of Medina, Texas. This page has been viewed 225 times since then and 61 times this year. Photos:   1, 2. submitted on October 20, 2020, by James Hulse of Medina, Texas. • J. Makali Bruton was the editor who published this page.
Share this page.