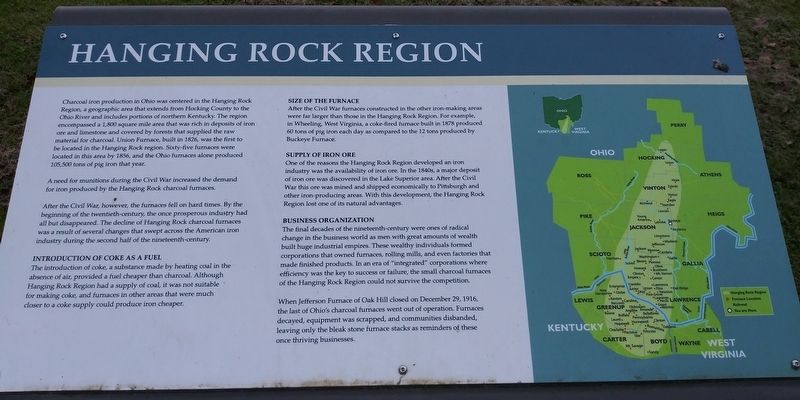 Charcoal iron production in Ohio was centered in the Hanging Rock Region, a geographic area that extends from Hocking County to the Ohio River and includes portions of northern Kentucky. The region encompassed a 1,800 square mile area that was rich in deposits of iron ore and limestone and covered by forests that supplied the raw material for charcoal. Union Furnace, built in 1826, was the first to be located in the Hanging Rock region. Sixty-five furnaces were located in this area by 1856, and the Ohio furnaces alone produced 105,500 tons of pig iron that year.

A need for munitions during the Civil War increased the demand for iron produced by the Hanging Rock charcoal furnaces.

After the Civil War, however, the furnaces fell on hard times. By the beginning of the twentieth-century, the once prosperous industry had all but disappeared. The decline of Hanging Rock charcoal furnaces was a result of several changes that swept across the American iron industry during the second half of the nineteenth-century. 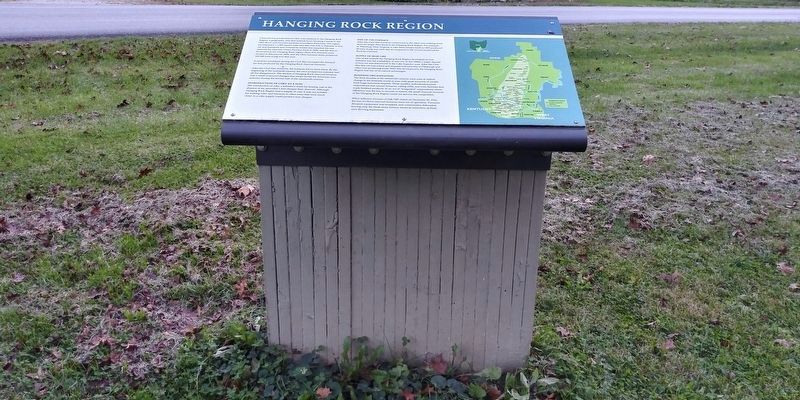 Click or scan to see
this page online
in the absence of air, provided a fuel cheaper than charcoal. Although Hanging Rock Region had a supply of coal, it was not suitable for making coke, and furnaces in other areas that were much closer to a coke supply could produce iron cheaper.

Size of the Furnace
After the Civil War furnaces constructed in the other iron-making areas were far larger than those in the Hanging Rock Region. For example, in Wheeling, West Virginia, a coke-fired furnace built in 1878 produced 60 tons of pig iron each day as compared to the 12 tons produced by Buckeye Furnace.

Supply of Iron Ore
One of the reasons the Hanging Rock Region developed an iron industry was the availability of iron ore. In the 1840s, a major deposit of iron ore was discovered in the Lake Superior area. After the Civil War this ore was mined and shipped economically to Pittsburgh and other iron-producing areas. With this development, the Hanging Rock Region lost one of its natural advantages.

Photographed By TeamOHE, October 23, 2020
3. Hanging Rock Region Marker
one of its natural advantages.

Business Organization
The final decades of the nineteenth-century were ones of radical change in the business world as men with great amounts of wealth built huge industrial empires. These wealthy individuals formed corporations that owned furnaces, rolling mills, and even factories that made finished products. In an era of "integrated" corporations where efficiency was the key to success or failure, the small charcoal furnaces of the Hanging Rock REgion could not survive the competition.

When Jefferson Furnace of Oak Hill closed on December 29, 1916, the last of Ohio's charcoal furnaces went out of operation. Furnaces decayed, equipment was scrapped, and communities disbanded, leaving only the bleak stone furnace stacks as reminders of these once thriving businesses.

Topics and series. This historical marker is listed in this topic list: Industry & Commerce. In addition, it is included in the Appalachian Iron Furnaces series list. A significant historical date for this entry is December 29, 1916. 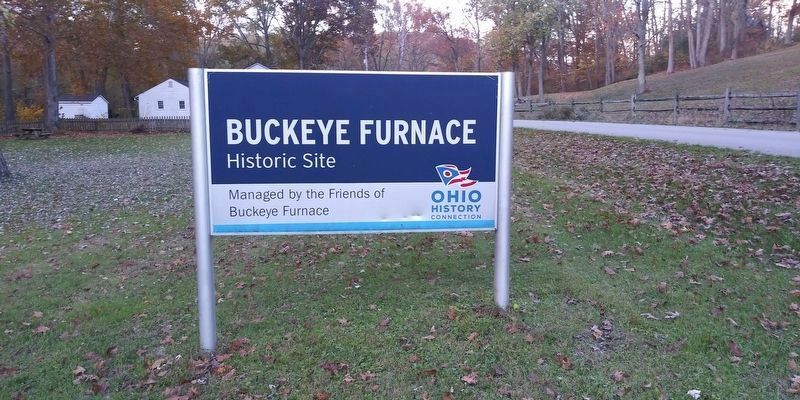